Prosecutor Tells Accused Murderer She Has a ‘Cold Heart,’ Grills Her About What She Did When Her Husband Died

Murder defendant Lynlee Renick, 33, appeared emotional and distraught as she told jurors Wednesday that she overheard her ex-boyfriend Michael Humphrey shooting and killing her husband Benjamin Renick, 29, but prosecutor Kevin Zoellner offered no sympathy during cross-examination. He attempted to pull on the strings of Lynlee’s story. Under his questioning, defendant Renick admitted on the stand that she suggested to police they should investigate the victim’s brother, not Humphrey, even though she testified he was the real killer.

“Do you know what kind of cold heart lies within you?” Zoellner asked her in the Boone County, Missouri, courtroom. Naturally, her defense objected for relevance and proper lawyer comment. The judge sustained the objection.

You can watch this tense exchange beginning at the 12:26 mark in the video below.

Prosecutors said Lynlee Renick fatally shot her husband June 8, 2017 after failing to kill him by grinding Percocet into a protein shake. She had recruited friend and employee Ashley Shaw to help plan, and when the protein shake idea didn’t work, the women sought out Renick’s ex-boyfriend Michael Humphrey, authorities said.

Renick denied on the stand that she ever wanted to kill her husband, though she claimed he raped her, and was abusive. She said she planned on leaving him. She had only told Shaw about her marital problems, she said. In this account, she was going to tell Benjamin she wanted a divorce, but wanted someone at her side. She went to Humphrey for support. She claimed to be outside at her husband’s snake breeding facility when she heard gunshots, and Humphrey exited, telling her to get to the car. 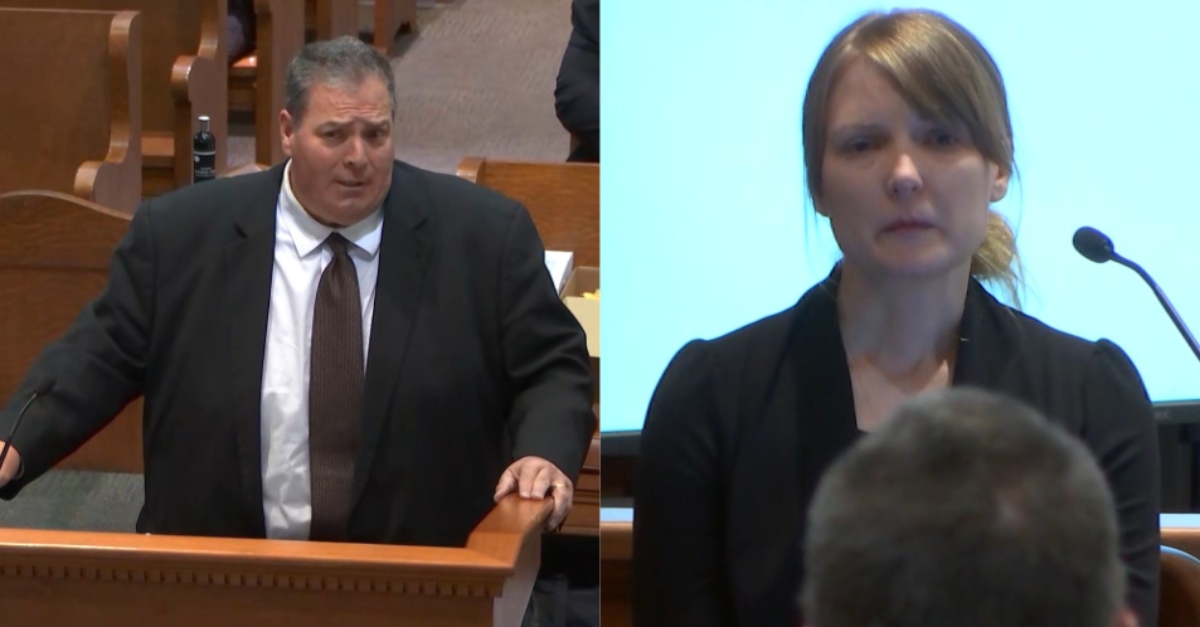 Zoellner attempted to knock down this story in front of jurors. He grilled Renick on why she even brought Humphrey in the first place. After all, she had not seen him in years, and she had said that the relationship was toxic due to drug problems between the two of them. Both Shaw and Humphrey testified that Renick brought them in on the plot, though she alone shot Benjamin. Both of them cut deals with the prosecutor. Shaw dodged charges outright, while Humphrey managed to get his first-degree murder conviction in this case knocked down to second-degree murder.

Renick acknowledged that she did not seek her close friends to accompany her when she wanted to speak to her husband about a divorce. Also, she said she did not bring her father because she knew he would not morally agree with the decision to divorce.

She claimed that upon hearing on the gunshots she did not consider if her husband was dead. She said she simply left with Humphrey, believing her husband to be fine. Renick said she froze. Renick testified that she did not want to face the reality of what happened, but Zoellner confronted her with messages she sent her husband during the period when she believed he might have been in danger. This communication included a phone call. She got no response, she said. Even then, she did not call 911. When Renick texted Humphrey about meeting the next day, she did not mention the gunshots, the prosecutor pointed out.

In other words, the state is trying to show that Renick is just putting on an act.

Renick acknowledged that once first responders were at the scene, she did not tell them her account of the gunshots and that she also put authorities off the scent of Humphrey. She admitted to lying, though she maintained it was something she did because she did not want to realize the truth, and because once she learned Benjamin was dead, she was afraid of Humphrey and did not want him to go after her or her children.