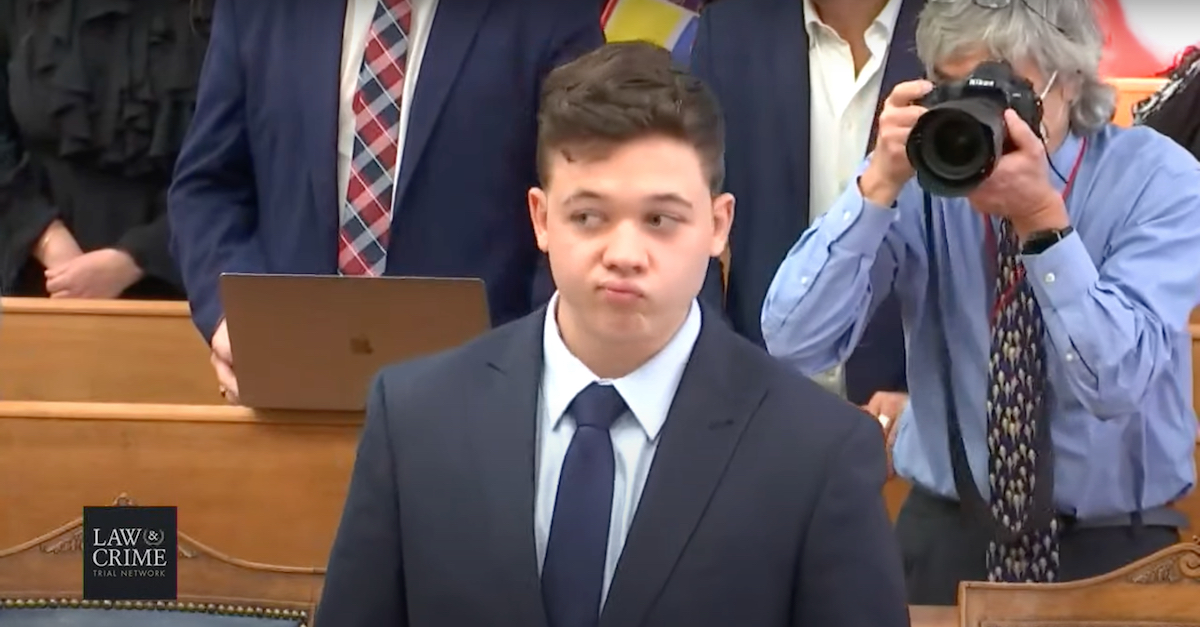 Kyle Rittenhouse stands during a break in his murder trial in Kenosha, Wis., on Fri., Feb. 5, 2021. (Image via the Law&Crime Network)

Two members of a family that owns a series of used car lots in Kenosha, Wisconsin, testified that they did not give permission to Kyle Rittenhouse or other members of his cohort to protect their businesses around the time that Rittenhouse shot and killed two people and wounded a third.

Sahil Khindri, who goes by the name “Sal” and whose father owns Car Source, said he never spoke with anyone about assembling a detail to protect the family’s Kenosha properties. He indicated that the group randomly converged on the property. He testified that he was impressed with the posse’s gear but seemed to suggest that he was afraid to ask them to leave. 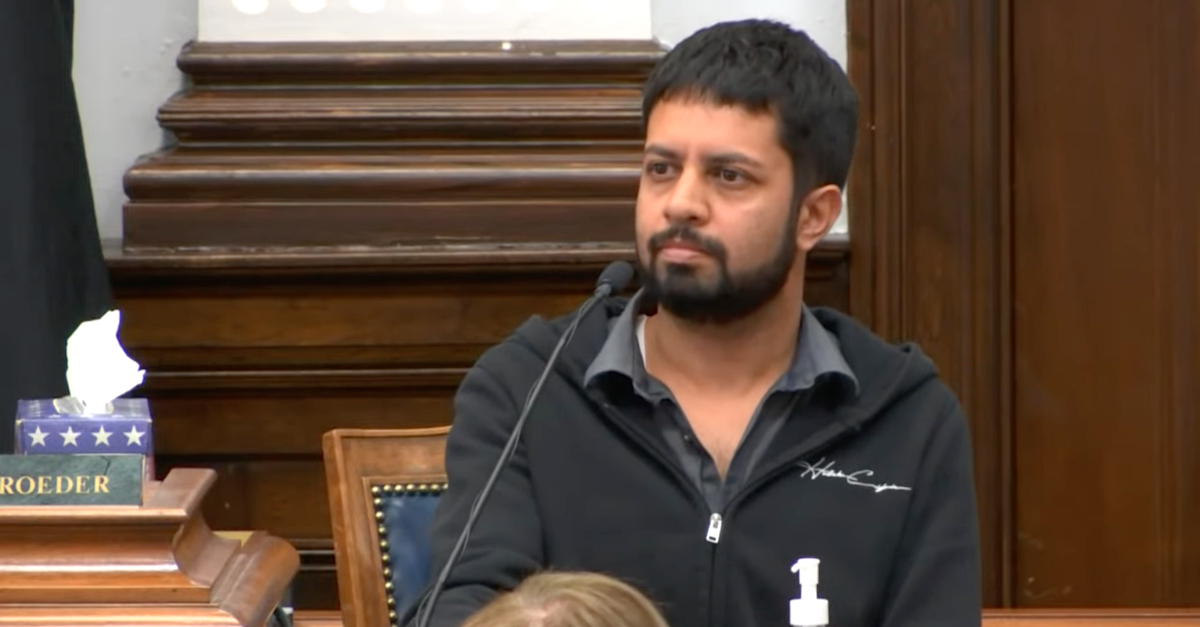 “Especially when they have guns and dress up right in front of me,” Sahil Khindri said. “I observed they were dressing up. For me, that was really impressive,” he added later.

He posed for a photo with the group but testified he did not communicate with them about protecting his business.

“They were saying that they were here to protect Kenosha,” Sahil Khindri testified. 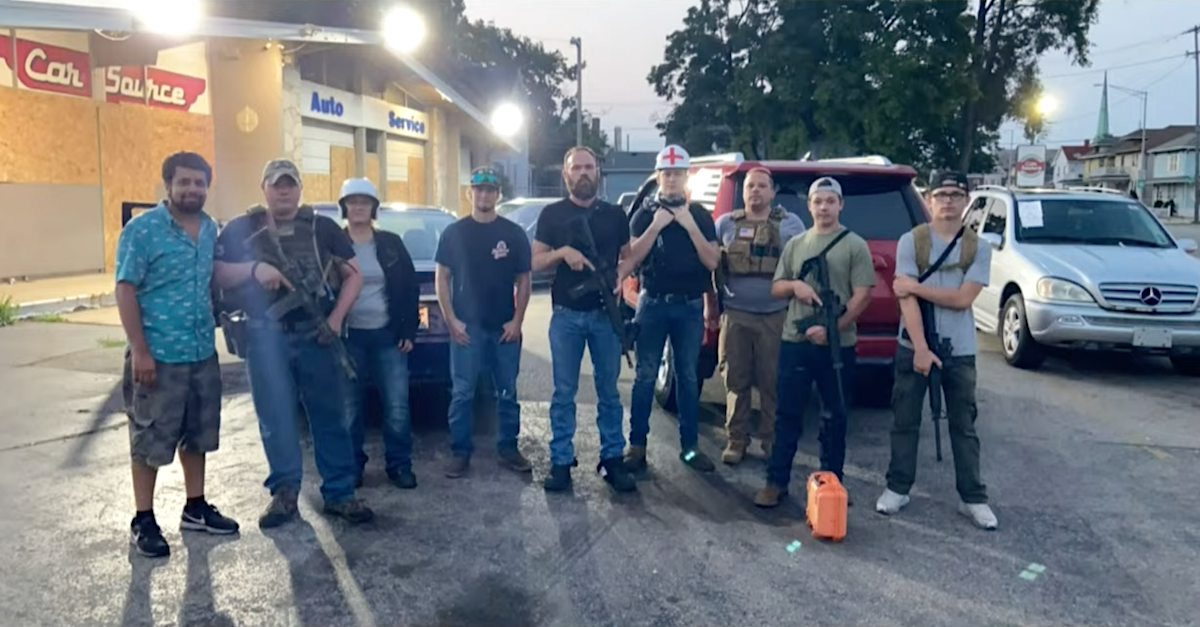 Sahil Khindri (far left) testified that he posed with Kyle Rittenhouse’s posse but claimed he did not give them permission to guard his family’s used car lot. Rittenhouse is at right in a green shirt standing behind an orange container on the ground. An individual identified as Nick Smith appears wearing a white had adorned with a red cross. (Evidence photo via the Law&Crime Network)

None of them said they were “specifically there for Car Source,” lead prosecutor Thomas Binger asked Khindri to confirm. Khindri agreed with Binger’s assessment of the matter.

Khindri added on re-cross that he was unaware members of the posse were at all of his family’s business locations. 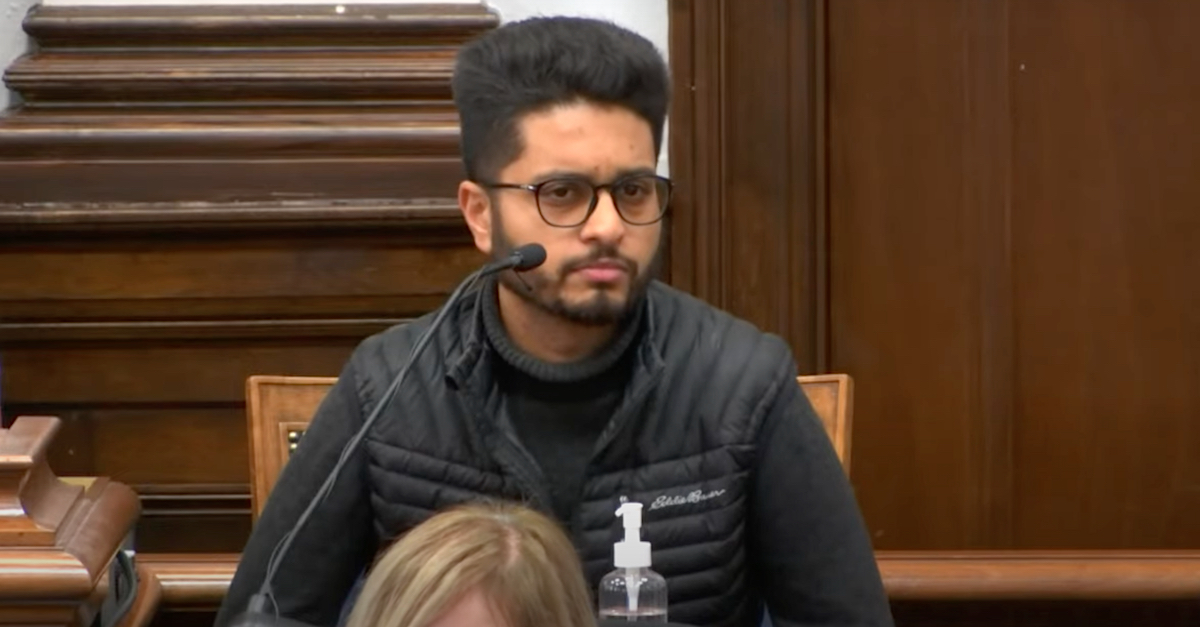 Sahil Khindri’s brother Anmol Khindri, who goes by the name “Sam,” testified that he handled inventory management for his family’s various car businesses and that his family moved considerable material to a separate storage facility after significant fire damage occurred on one lot prior to Aug. 25, 2020. He steadfastly claimed that he also gave no permission for anyone to secure his family’s property on Aug. 25.

“Did you ever have any discussions that day with anyone about protecting or guarding either of the Car Source locations or Car Doctor?” Binger asked.

Anmol Khindri testified that had no “contact of any kind” whatsoever with Rittenhouse on Aug. 25, 2020 save for a text message he received from Rittenhouse at 3:02 p.m.; he appears not to have replied to it.

Anmol Khindri said “hundred of thousands of people” had his personal cell phone number; many were sending him condolences.  He indicated that he apparently gave Rittenhouse his number earlier on in the mayhem. Rittenhouse, he testified, approached him about the possibility of raising money to help his family — but not about a security detail.

“Did you talk to him about protecting or guarding either one of the Car Source’s locations or Car Doctor?” Binger asked.

“I did not,” the witness testified.

“On Tuesday, Aug. 25, did you talk to anyone about guarding or protecting either of the Car Source locations or the Car Doctor?” Binger asked more broadly.

“I did not,” the witness said. 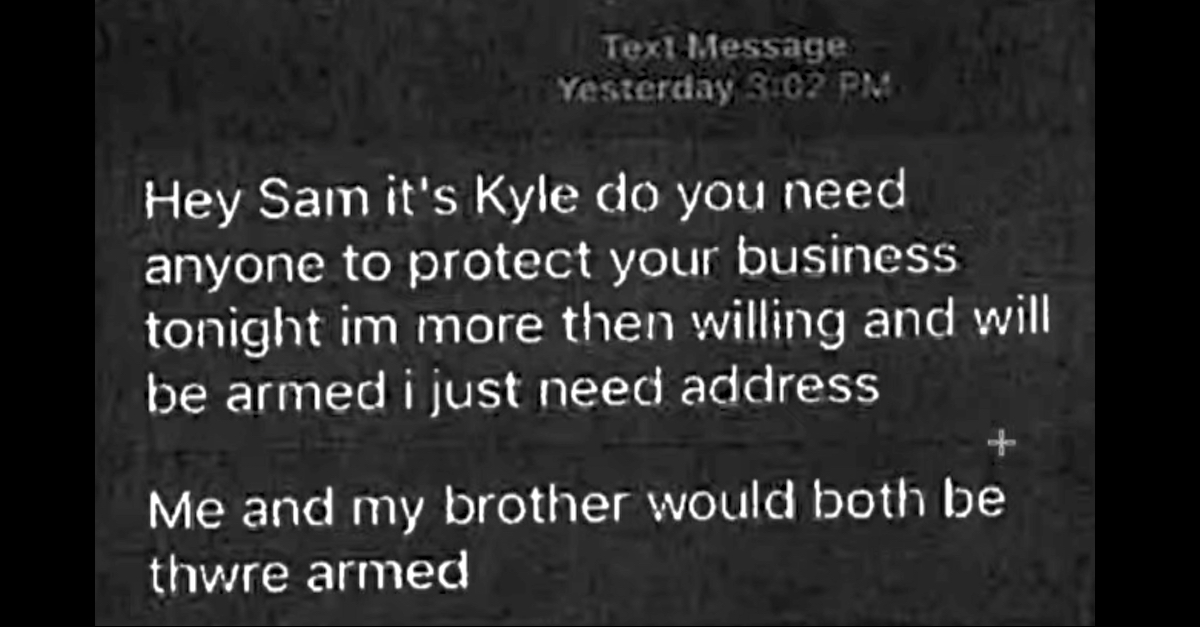 Anmol Khindri said he did not do any of the following for anyone who wished to guard his property: provide keys, offer money, pay money, give permission to be inside his buildings, or give permission for anyone to “guard or protect” the facilities. To the contrary, Khindri said he didn’t even know there were people “with guns who had taken it upon themselves to guard any of the Car Source locations or Car Doctor,” the latter being another business owned by his family which repaired vehicles but did not sell them.  He testified that he learned of the men’s presence by watching news reports.

Defense attorney Corey Chirafisi tried to deflate the testimony by asking Anmol Khindri if, in August 2020, he feared being sued if he allowed Rittenhouse and his posse onto his family’s car lots.

“No, sir,” the witness said — indicating he did not have such fears or concerns.

The witness said his family’s business lost “more than $100,000” but could not recall precise numbers. He indicated multiple times that his father handles the financial calculations and did not know details.

The defense noted that Dominick Black, the state’s first witness and the friend who bought the AR-15 Rittenhouse used in the deadly shootings, claimed he had permission from Anmol Khindri to occupy Khindri family properties.

“I did not give anybody permission,” the witness said.

“So, Mr. Black would be lying about that?” the defense asked.

The state objected, and the judge sustained the objection. The law dictates that any determination of whether Black was lying is for the jury to determine, not for another witness to opine about, the judge indicated.

Khindri said members of Rittenhouse’s group appear to have stacked tires onto the the cab of a pickup truck to reach the roof of his building. He testified that he never provided a ladder to anyone.

An increasingly agitated Chirafisi wondered why the witness claimed he didn’t want help.

“Were you just willing to let your property be damaged on the 25th?” defense attorney asked.

“After seeing the [previous] destruction, there was nothing I could do,” Anmol Khindri replied.

More than two dozen of the family’s cars had already reportedly been torched.

The witness repeatedly suggested he couldn’t understand some of the questions posed — further irritating Chirafisi.

The defense tried to use past media interviews — purportedly from Anmol Khindri — to suggest that insurance wasn’t paying for arson damages to the family’s vehicle inventory. However, the witness repeated that his father controlled the numbers and that he wasn’t aware of that side of the family business. He said the family did have insurance but stalled when asked for particulars. The defense seemed unnerved that the witness refused to corroborate past news reports that indicated $2.5 million in damages would not be covered by insurance. Anmol Khindri countered that some news reports also claimed he was dead — thus suggesting many news reports were inaccurate.

The witness also said two former employees from “years back” — at least one of whom, Nick Smith, appeared in the photo of his brother posing with Rittenhouse’s group — did not have permission to be on the property and did not have keys to any of the facilities. Smith was one of Dominick Black’s friends.