Brothers Who Say They Played a Role in Fake Attack on Jussie Smollett Can Sue Smollett’s Defense Attorney for Defamation: Judge 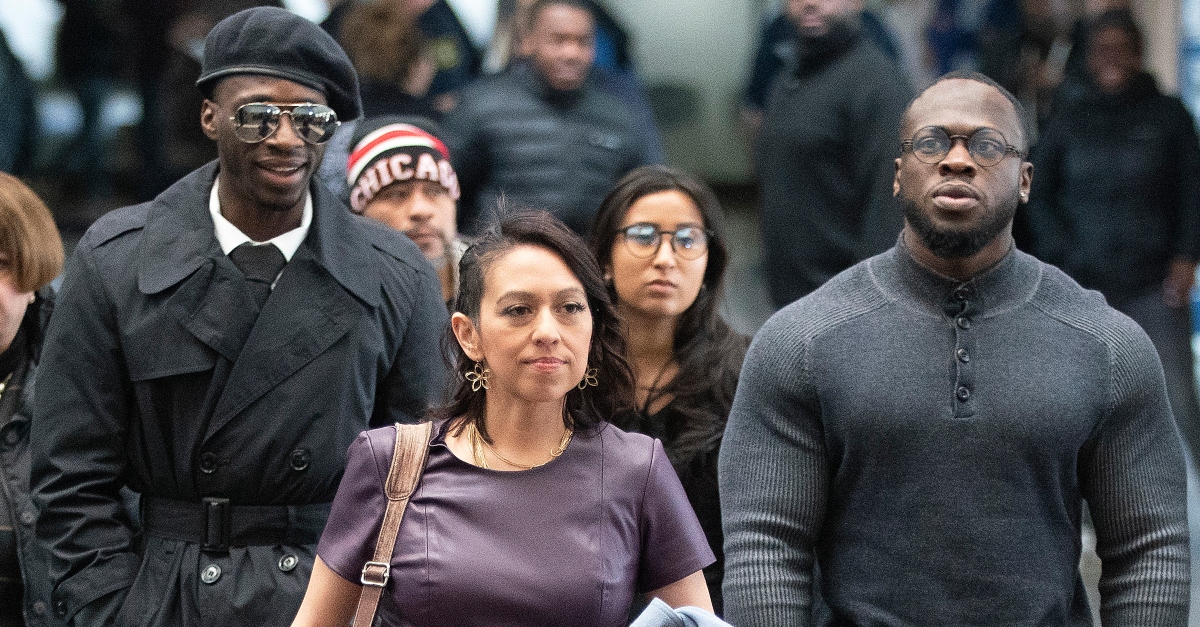 Two brothers who agreed to attack Jussie Smollett as part of what those brothers now say was a fake hate crime hoax can move forward with a defamation claim against one of Smollett’s attorneys, a federal judge has ruled.

“Mr. Smollett told Plaintiffs, in private, that he needed a favor from them: they were to help him stage a social media hoax and pretend to attack him,” the lawsuit says.  “Mr. Smollett’s motivation was simple. He wanted his employer and the public to notice and appreciate him as a successful Black, openly gay actor. So, Mr. Smollett directed every aspect of the attack, including the location and the noose.”

Smollett was charged, but the Cook County State’s Attorney’s Office dropped the matter in return for the forefeiture of Smollett’s bail money.  A special prosecutor resuscitated the case at the request of a retired judge and secured a trial by jury.  The subsequently empaneled jurors convicted Smollett, and he was sentenced on March 10 to serve 150 days in jail.  An Illinois appeals since released him from custody because his appeal will take longer to argue than his sentence was scheduled to last, Law&Crime recently noted.

That is the backdrop for the original lawsuit from the Osundairo brothers against the aforementioned defendants.  It reads, in part:

Mr. Smollett’s attorneys, faced with an outraged public, did not retreat after their success. Instead they doubled down, not simply affirming that Mr. Smollett was a wholly innocent victim, but that (among other accusations) Plaintiffs [the brothers Osundairo] unequivocally led a criminally homophobic, racist, and violent attack against Mr. Smollett. Defendants made these comments knowing they were untrue to distract from Mr. Smollett’s farce and to promote themselves and the Geragos & Geragos Law Firm. This vitriol against Plaintiffs is tortious and comprises the substance of the following allegations.

Specifically, the brothers pointed to Glandian and Geragos appearances on ABC’s “Good Morning America,” on NBC’s “Today,” and on a podcast as evidence of alleged defamation. 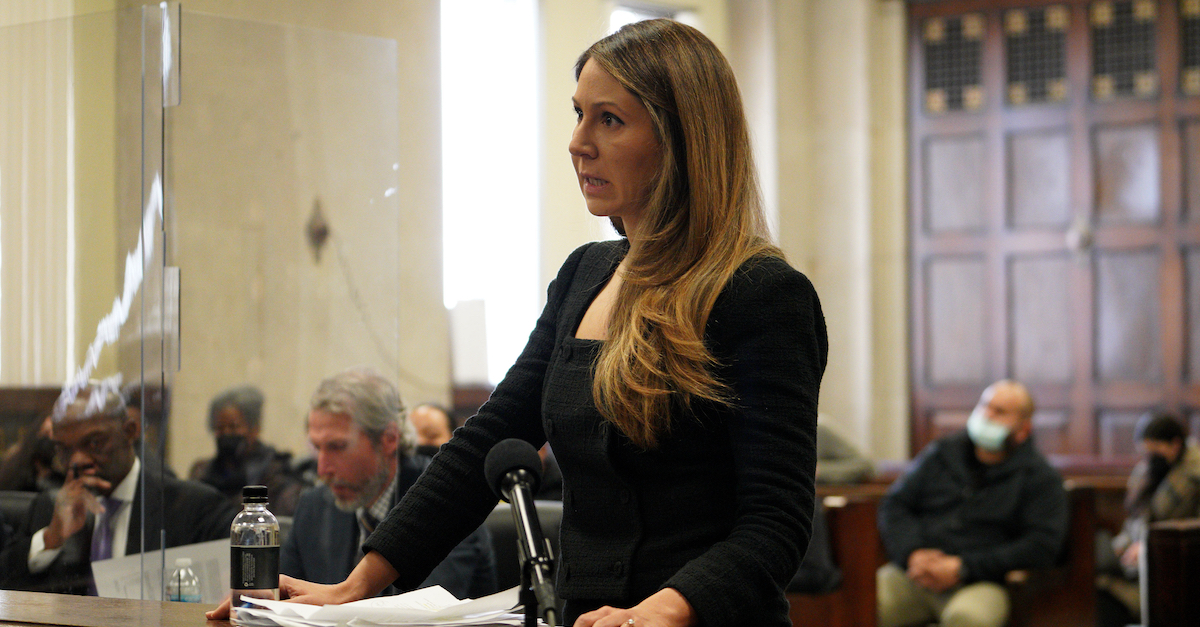 The lawsuit alleged the following five counts in this order:  (1) common-law defamation per se (against Glandian); (2) common law false light (also against Glandian); (3) common-law defamation per se (against Geragos, for allegedly speaking on a podcast and accusing the brothers of engaging in a “criminal” attack and committing “perjury”); (4) common-law false light (also against Geragos); and (5) respondeat superior (a principle which seeks to hold Geragos & Geragos as a corporate entity legally responsible for the alleged torts).

The complaint was filed April 23, 2019. The court threw out most of the plaintiffs’ claims back on March 17, 2020 — except for the comment about the defendants allegedly being in “whiteface.”  Accordingly, a more narrow amended complaint was filed June 11, 2020.

“Ms. Glandian falsely stated that Plaintiffs are involved in ‘illegal’ Nigerian steroid trafficking, and that these steroids help clients lose weight,” that amended complaint indicates.  “Plaintiffs do not use or distribute illegal Nigerian steroids. Ms. Glandian’s comments are patently false and defamatory.”

Glandian filed subsequent paperwork in an attempt to dismiss the case under Rule 12(b)(6) of the Federal Rules of Civil Procedure. 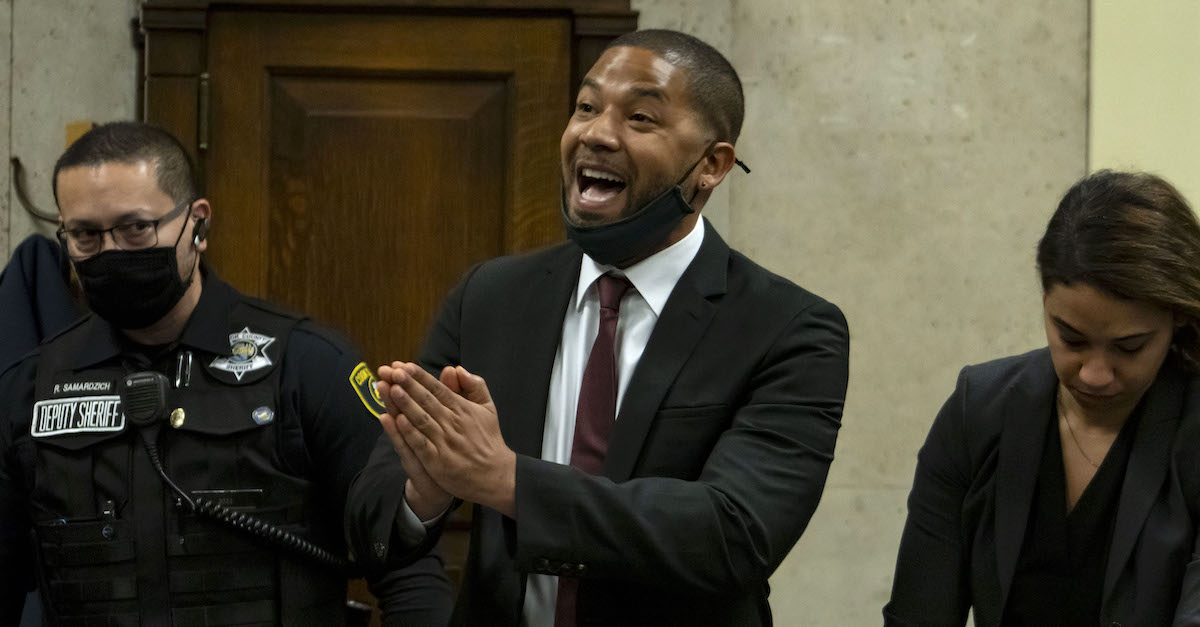 A judge issued an opinion and order on Thursday, March 17, 2022, which green-lit part of the action.  The document notes that Garegos (individually) and his law firm (as a corporate agent) were long ago dismissed as defendants and were included in the amended complaint by error. Glandian is the remaining defendant.

“A motion to dismiss tests the sufficiency of a complaint, not the merits of the case,” noted U.S. District Judge Mary M. Rowland of the Northern District of Illinois, Eastern Division.  And, here, Judge Rowland ruled that the complaint was sufficient to lay out a viable defamation claim.

Here’re the “Today” transcript at issue, as it is portrayed in the judge’s opinion:

Ms. [Savannah] Guthrie: According to the Court records, he – Smollett – was very clear with the police on the night of the attack that his attackers were white. He said they had masks on and gloves, but he saw their eyes and he saw the skin surrounding their eyes. Was that a false statement?

Ms. Glandian: . . . Just to be clear, he only saw one of the attackers, one of them he didn’t see. He saw one through a ski mask. Again he could not see their body. Everything was covered. And he [the attacker] had a full ski mask on, except the area around his eyes. He did tell the police that he – from what he saw, he thought it was pale skin or – white or pale skin was, I think what he said. . . .

Ms. Guthrie: But the Osundairo brothers, what are the chances that . . . [Smollett] saw someone with light skin?

Ms. Glandian: Well, you know, I mean, I think there’s—obviously, you can disguise that. You could put makeup on. There is, actually, interestingly enough, a video. You know, I think police did minimal investigation in this case. It took me all of five minutes to Google—you know, I was looking up the brothers, and one of the first videos that showed up, actually was one of the brothers in “whiteface” doing a Joker monologue with white makeup on. And so it’s not—it’s not implausible.

The judge interpreted the situation by weighing law and fact in this fashion:

In response to the original complaint, Glandian argued the “whiteface” statement could not constitute defamation per se because the statement was subject to an innocent construction. This Court denied the motion on those grounds. Defendant now argues that this statement is constitutionally protected opinion and that donning “whiteface” is not indicative of a hate crime. The Court disagrees.

Read in context, Glandian was pressed about the Plaintiffs being attackers, given Smollett’s description of the attackers as light skinned or white. In order to explain (not opine) how they could be attackers (as dark-skinned individuals), Glandian describes the use of make-up and bolsters her explanation with the fact that one of the Plaintiffs previously performed in whiteface—meaning he was experienced with make-up.

Plaintiffs have plausibly alleged that Glandian asserted to the Today audience that Plaintiffs committed the attack—despite their being dark skinned—with the help of lightening makeup. Given the context, a plausible interpretation of Glandian’s “whiteface” comment is that she was attempting to dispel the inconsistency in Smollett’s story (the attackers had light skin) and bolster her contention that the Plaintiffs (who are not light skinned) were Smollett’s attackers. Disputing that she ascribed any hate crime motive to Plaintiffs, Glandian asserts she only theorized about “the method by which Plaintiffs may have perpetrated the attack” (emphasis in original). Again, taken in context, Glandian was asserting Plaintiffs’ involvement in a racially motivated attack. Smollett’s report “led to international outrage, with near unanimous cries for the Chicago Police … to find and prosecute his attackers.” Explaining that the attackers were white, read in context, adds the implication that the attack was a hate crime. Based on the “whiteface” statement, Plaintiffs have plausibly alleged defamation per se and false light.

In short, the judge found that the “whiteface” comment qualified as defamation per se because it alleged that the brothers committed a hate crime — an illegal act — and was therefore actionable.

The judge then turned to the “steroids” comment. That section of the case was dismissed, Judge Rowland wrote, because the brothers Osundairo alleged a count of defamation per se — and “extrinsic evidence” was necessary to ascertain whether or not the “steroids” comment was true. Because extrinsic evidence was necessary to weigh the comment’s truthfulness, it could not be defamation per se — or, in other words, on its face.

“To be actionable as defamation per se the statement must directly or expressly accuse the plaintiffs of committing a specific crime,” the judge later noted. And, as such, the judge also dismissed the claims surrounding Glandian’s assertions that the brothers Osundairo had been lying during the probe — specifically, the judge rationed, because Glandian didn’t expressly accuse them of the crime of “perjury.”

Glandian is accusing Plaintiffs of lying generally and implying found magazines with missing pages and postage stamps in Plaintiffs’ apartment are relevant. Notably, Glandian does not directly or expressly accuse them of lying in a grand jury or under oath. Glandian also does not expressly or directly say that the brothers lied to law enforcement. Plaintiffs’ claims of defamation per se and false light based on Glandian’s statements regarding perjury or lying to law enforcement are dismissed.

The judge also dismissed a claim by the Osundairo brothers that Glandian defamed them by accusing them of “criminal battery.” That claim was based on “the overall message communicated by Glandian’s interviews,” not on Glandian’s specific statements, and therefore had to fail as a matter of law, the judge said.

The judge then recapped the ruling:

[Editor’s note: legal citations have been omitted from some quotes herein. The full quotes with citations are in the embedded document.]