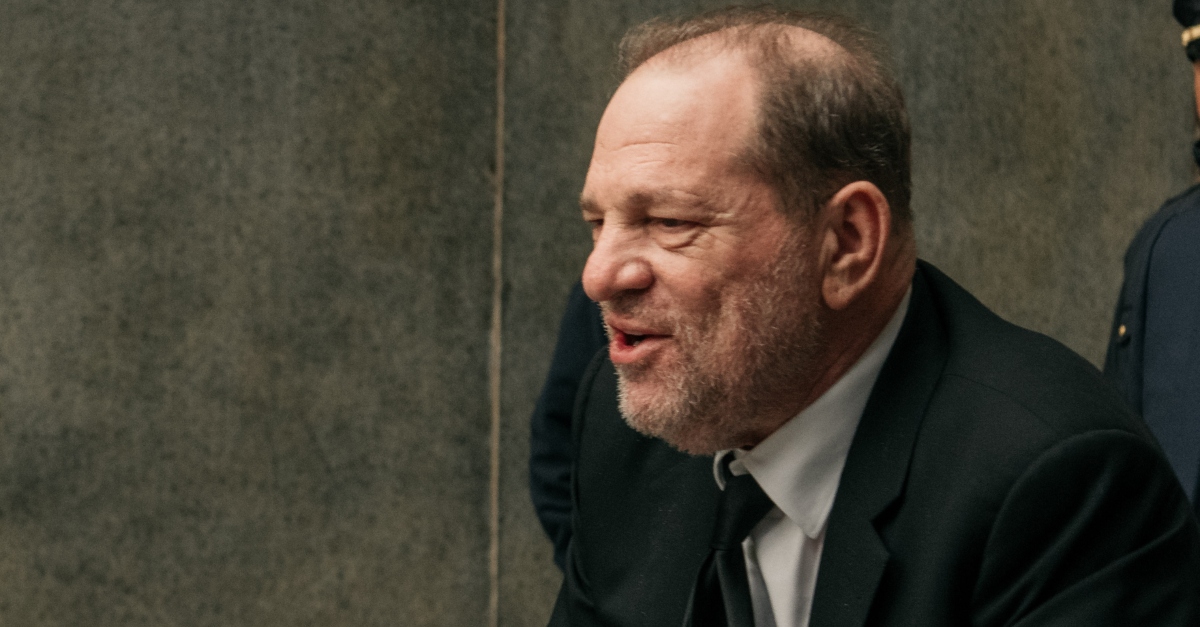 Deliberations continue Monday in the rape trial of defendant Harvey Weinstein and people are wondering what the jury’s notes might mean for the verdict. Law&Crime founder Dan Abrams predicted that jurors may acquit the defendant on the lesser charges, but that some are trying to find a way to convict the defendant on the most serious counts, which are buttressed by testimony from actress Annabella Sciorra.

The situation has Abrams thinking that Weinstein will be acquitted on at least one of the most serious charges.

This may seem counter intuitive legally but I believe that it’s likely jurors have acquitted #HarveyWeinstein on some or all of the lesser charges and that some are trying to find a way to convict on the most serious charges which also included the most persuasive witness. It . .

. . may not make legal sense since they would also need to believe one or both of the other accusers to convict on the most serious charge but based on their questions and strength of various witnesses it’s the only scenario that makes sense to me. #nooneknowsforsure

Weinstein is tried in the alleged 2006 sexual assault of former production assistant Mimi Haleyi, and alleged rape of former actress Jessica Mann. Sciorra testified that the defendant raped her in the early 1990s after he forced his way into her apartment. Jurors must follow a pretty convoluted set of instructions to decide the defendant’s fate.

EVERYONE who watches the Debrief should read the verdict sheet (attached here again) to understand what the jury is going through. https://t.co/gqS4tYkppR pic.twitter.com/PAVXqRDuq3

Count one is predatory sexual assault: Jurors can only find him guilty of this if they believe the allegations of both Haleyi and Sciorra.

Count two is criminal sexual act in the first degree. They only convict him of this if they believe Haleyi’s story, but not Sciorra’s. They cannot consider this if they already found him guilty of count one.

Count three is predatory sexual assault. Jurors must believe both Mann and Sciorra to convict. Also note that it’s kind of a package deal with count one because if jurors don’t believe Sciorra, then it’s an acquittal on both counts one and three. Jurors also would not consider counts four and five if they convict on count three.

Count four is rape in the first degree. Jurors must believe Jessica Mann to convict, but they can only consider this charge if they don’t believe Sciorra.

Count five is rape in the third degree. Jurors can only consider this if Weinstein is acquitted on counts three and four.

It’s comparatively a lot to parse through in just a one-page verdict sheet. Instructions, however, didn’t clarify what they must do if they deadlocked on any of the more serious charges.

#HarveyWeinstein Breaking: Jury sent note asking for guidance if they are hung as to Counts 1 & 3 (PSA) but unanimous on other counts. People rejected partial verdict. Judge instructed them to keep deliberating

#HarveyWeinstein the latest note could mean two things: they are ready to convict him of crim sex act and rape 1, both 5-25 years, and hung as to PSA or they haven’t decided three counts and are hung as to PSA counts

Abrams suggests that there’s a real possibility that jurors have decided to acquit Weinstein on the Jessica Mann case, and perhaps Haleyi case.

“To be clear, if they acquitted on the lesser offenses then theoretically they should be acquitting on the most serious charges regardless of what they think about Annabella Sciorra’s account,” he told Law&Crime. “But I wonder if some are looking for a way not to completely let him off the hook here because they believe Sciorra. I say this largely because Jessica Mann was the most problematic of the three and yet in their deliberations jurors seemed uninterested in hearing any of her testimony read back or clarified, but they did want to hear extensively from Haleyi and Sciorra. That makes me think the Mann charges may have been a relatively easy conviction or acquittal, and I find it hard to believe they easily convicted based on her testimony and yet were having a hard time with the two more powerful witnesses: Haleyi and Sciorra.”

“Any sane legal analyst would be agreeing that there must be convictions on the lesser charges if they are hung on the more serious ones but I’m betting that there will be an acquittal on the charges connected to Jessica Mann, 50-50 on an acquittal on Haleyi and now there are some who simply believe he is a ‘serial predator’ and want to find a way to convict based on Sciorra’s testimony,” he concluded.