Attorney: Weinstein’s ‘Perfect Storm’ of Health Problems Sends Him Back to the Hospital 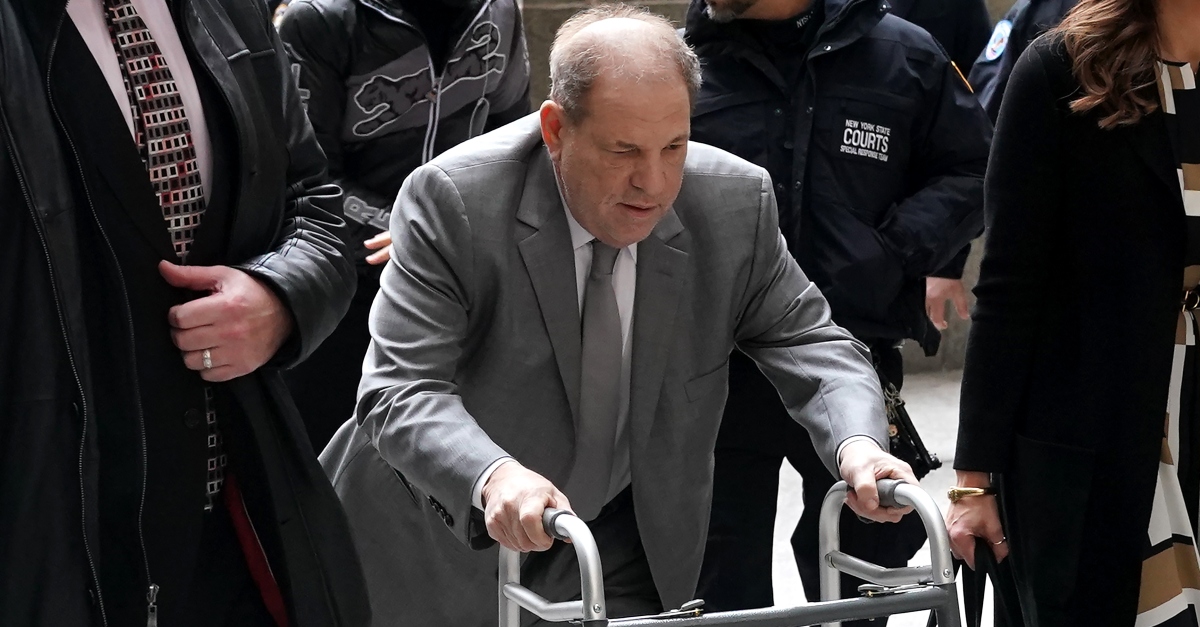 Convicted rapist Harvey Weinstein is returning to Bellevue Hospital, says one of his attorneys.

“After the sentencing yesterday, Harvey Weinstein was experiencing a [similar issue] with his blood pressure where it was elevated to dangerously high levels, coupled with the heart procedure that he had previously, and the concussion he’s being treated for, plus the spinal stenosis,” said lawyer Imran Ansari in a statement to the Law&Crime Network.  “Its a perfect storm health-wise for Harvey, so the doctor — in an abundance of caution and to ensure that Harvey is being treated properly, medically speaking — was transported to Bellevue so he could receive urgent medical care. He remains under the care of doctors within the Bellevue Hospital prison ward where his conditions are being monitored. The Department of Corrections [is] doing a great job monitoring Harvey’s condition and ensuring is receiving the appropriate medical care.”

The New York City Department of Corrections website, viewed by Law&Crime, shows that Weinstein is indeed at the Bellevue Hospital Prison Ward as of Thursday afternoon.

Weinstein spokesman Juda Engelmayer earlier told the Law&Crime Network that Weinstein would eventually be returned to New York City’s Rikers Island jail before being transferred to the New York State Department of Corrections to serve his prison sentence.  New York State will almost certainly receive Weinstein at its Downstate Correctional Facility in Fishkill, New York, his spokesman and attorneys have said, which is where the state prison system currently intakes all inmates from the New York City region. From Fishkill, Weinstein could be transferred to another New York State prison facility for permanent placement.  Downstate Correctional in Fishkill does contain medical facilities should Weinstein need them.

Weinstein had been seen almost always using a walker at his New York trial. He was first sent to Bellevue after he was found guilty last month of rape in the third degree against former actress Jessica Mann and criminal sexual act in the first degree against former production assistant Mimi Haleyi. Weinstein was acquitted of the more serious charges of predatory sexual assault.

Dozens of women have accused Weinstein of sexual misconduct, and some of them remarked bitterly on the defendant going to Bellevue instead of Rikers.

“This is a man who knows how to manipulate the press and clearly he’s done so with his iconic walker; let’s just say I know women who are literally dying who are also victims and I say let’s give them the help,” former actress and screenwriter Louisette Geiss told The Hollywood Reporter at the time. “If he’s got to go to the hospital it should be in jail, that kind of hospital, not one where he has his own suite.”

Weinstein left Bellevue for Rikers on March 5. A judge sentenced him on Wednesday to 23 years in prison for the rape and criminal sex act cases. The 67-year-old inmate, who turns 68 next Thursday, must register as a sex offender and submit to post-release supervision. His team has said it plans to appeal the conviction now that sentencing is final.

Weinstein also faces a pending case in Los Angeles on similar charges of rape and sexual assault. Prosecutors there announced Wednesday that they have begun the extradition process.

“I don’t believe Weinstein’s latest health concerns will impact his eventual return to California to face additional charges,” said Law&Crime Network analyst Julie Rendelman, a New York-based defense lawyer who is unaffiliated with the case. “It may certainly slow down the process but unless his condition worsens, extradition is inevitable.”

Sarah Puckett and Aaron Keller contributed to this report.