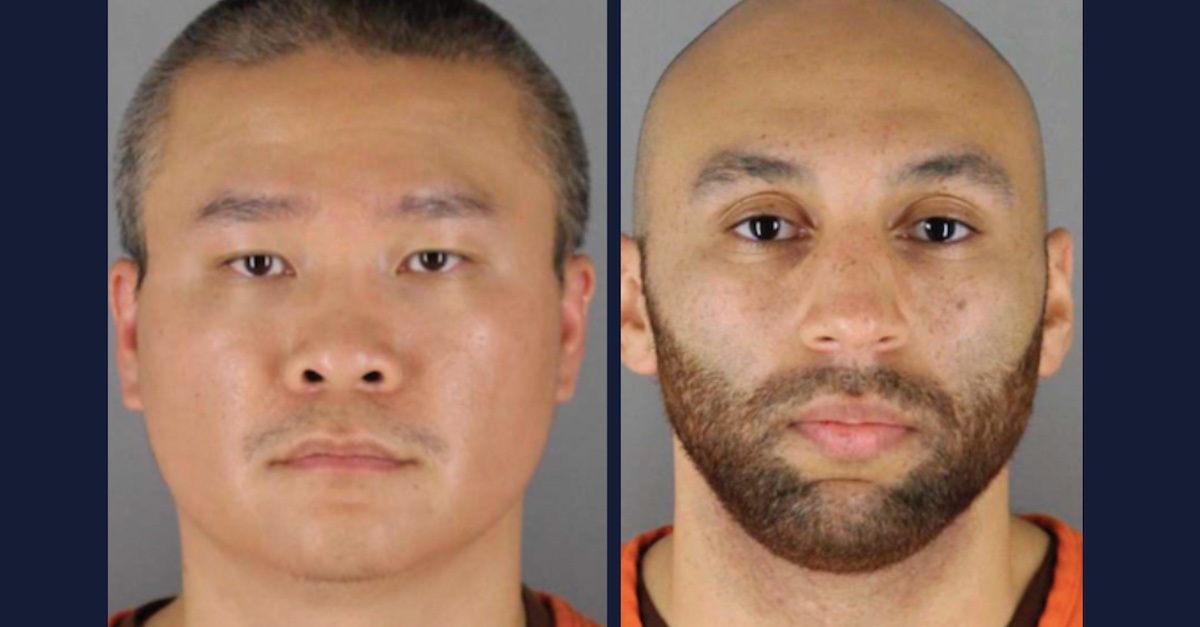 The final two former Minneapolis police officers due to be punished for violating George Floyd Jr.’s civil rights were sentenced to prison on Wednesday.

J. Alexander Kueng will spend 36 months (three years) behind bars in either Duluth, Minnesota, or Yankton, South Dakota, to be close to his family, a federal judge determined. He will surrender to the U.S. Marshas Service at 11:00 a.m. on Oct. 4 to begin serving the term.

Tou Thao will spent 42 months (three and a half years) in prison, the judge determined. The sentence will be served at the same facilities beginning at the same time.

Thao defense attorney Robert Paule argued that his client was a lesser participant in Floyd’s death because he wasn’t actively involved in the restraint.

U.S. District Judge Paul Magnuson declined to credit prosecutors who asked for an enhanced sentence due to Thao’s testimony during trial. The judge said he would not fault Thao for testifying in his own defense, according to notes from the sentencing hearing compiled by pool reporter Lou Raguse of Minneapolis NBC affiliate KARE-11.

Thao’s sentence was more strict than Kueng’s and Lane’s because he was more experienced than the other two and should have known to intervene, the judge determined.

Courteney Ross, Floyd’s girlfriend, criticized Thao for telling onlookers “this is why you don’t do drugs” as Floyd died. Ross characterized the words Thao used as callous.

“This is why you don’t violate a person’s civil rights,” Ross schooled Thao in a return play on his own words.

Magnuson noted that 744 people signed letters in support of Thao.

Thao spoke at length — for at least 20 minutes — but did not apologize to Ross or to Floyd’s family. Rather, he spoke of law enforcement corruption and of his own faith as a Christian.

“When my friends here scheme and lie, God knows,” he reportedly said, according to the pool notes from court.

“Being in law enforcement, I’ve never seen so much corruption early in this case,” he also said. “I thought this only happened in Hollywood.”

Kueng’s attorney described his client as a new officer who simply deferred to the authority of a much more senior officer, according to pool notes by Stephen Montemayor of the Minneapolis Star Tribune newspaper.

Magnuson said Kueng played an active role in Floyd’s death by holding him down for eight minutes while Chauvin murdered Floyd.

“To argue Mr. Kueng is something less than an average participant thus ignores the facts of the case,” Magnuson said, according to the pool notes.

Defense attorney Thomas Plunkett said the government sought “to deepen the tragedy by imposing harsh sentences” on his and the other officers involved.

Plunkett described Kueng as “the youngest and least experienced officer” involved “both in life and in police experience.”

The defense attorney characterized his client as a “nice young man who endeavored to help the community by taking on a difficult role.” Now, according to the defense, Kueng “is being sentenced for that how that turned out.”

“Someone can be a person” who “does good things and and has the right ambitions — but on one occasion has a catastrophic lapse that causes a person death,” said Assistant U.S. Attorney Manda Sertich. “Even if the death was unintended, a serious punishment is warranted.”

“This is a court of law; this is not a place of public perception, opinion, etc.,” Magnuson reportedly said while sentencing Kueng. “It will remain a court of law.”