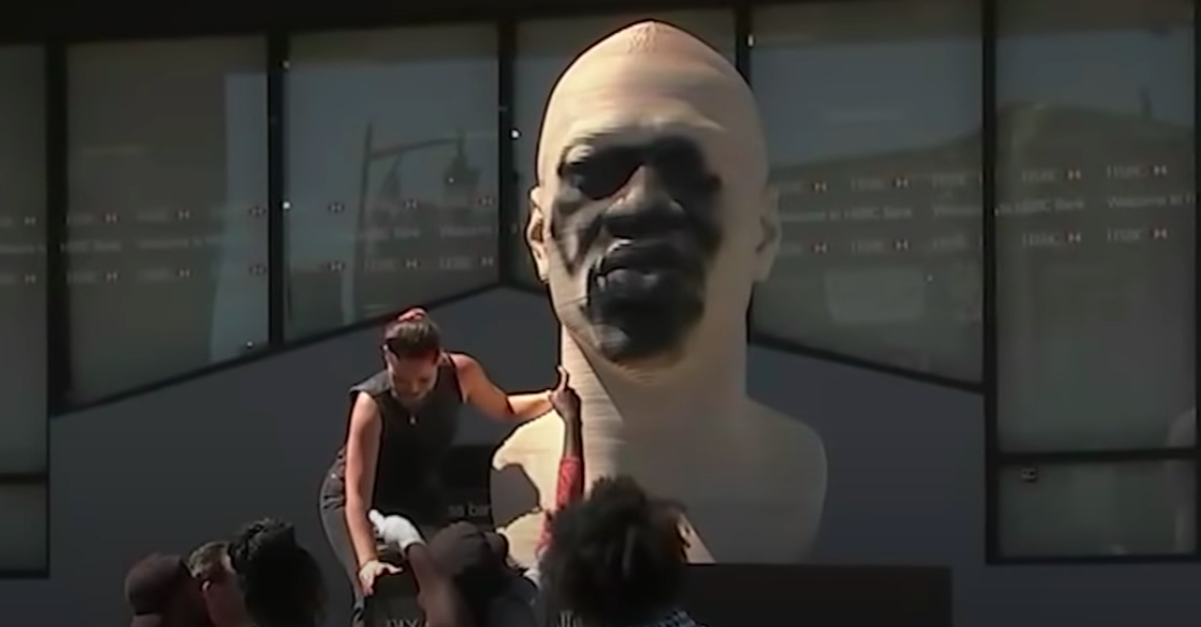 Volunteers clean the George Floyd statue in Brooklyn that was vandalized Thursday.

In New York, the vandals targeted a six-foot wooden bust of Floyd erected last week on Flatbush Avenue in Brooklyn. The face of the statue—from the eyebrows down to the chin—was covered in black paint.

The Task Force released photographs of four people believed to be responsible for the act of vandalism that occurred in the pre-dawn hours of Thursday morning. In a tweet, the Task Force explained that “black spray paint was used to deface the sculpture and cover text on the pedestal.”  A web URL for PATRIOTFRONT.US was then sprayed in white, the police said.

On 6/24/21 at 3:40 AM, four individuals defaced a George Floyd monument at 1545 Flatbush Ave, Bklyn. Black spray paint was used to deface the sculpture and cover text on the pedestal. “PATRIOTFRONT .US” was stenciled in white spray paint on the pedestal. INFO? ☎️1-800-577-TIPS pic.twitter.com/bnBwEraOWg

That website is linked to the group that also calls itself Patriot Front, a “white supremacist group” formed by “disaffected members” of Vanguard America in the wake of the 2017 Unite the Right rally in Charlottesville, Va., according to the Anti-Defamation League (ADL).

Embattled Gov. Andrew Cuomo on Thursday denounced the vandalism as an act of “cowardice” and said he had directed the New York State Police to assist the New York Police Department in the investigation.

“New York’s new monument to George Floyd, which was unveiled in Brooklyn just this past weekend on Juneteenth, is more than just a memorial for a father, a son, and a friend — it’s a testament to the grief, anger, and righteous energy that his murder sparked in our state and across the country. It’s a beacon for all who believe progress is possible, and in our ability to make it happen,” Cuomo said.

“And to the group of neo-Nazis who did this, I want to be absolutely clear: get the hell out of our state.”

I am directing the @nyspolice Hate Crimes Task Force to assist in the investigation of the defacing of the George Floyd monument in Brooklyn.

To the group of neo-Nazis who did this, I want to be absolutely clear: get the hell out of our state. pic.twitter.com/Mjkpn4lVLZ

Authorities in New Jersey said a statue of Floyd that was also erected on Juneteenth in front of Newark City Hall was similarly vandalized with white and black spray paint early Thursday morning and tagged with the Patriot Front website.

“This horrible act is the very reason that this statue needs to remain and be upheld,” Newark Mayor Ras Baraka said in a statement. “As this is not just about George Floyd, it’s a deliberate effort to push back against and ultimately dismantle systems of hatred, racism, and white supremacy.”