Why Derek Chauvin Might Get Acquitted of Murder | Law & Crime 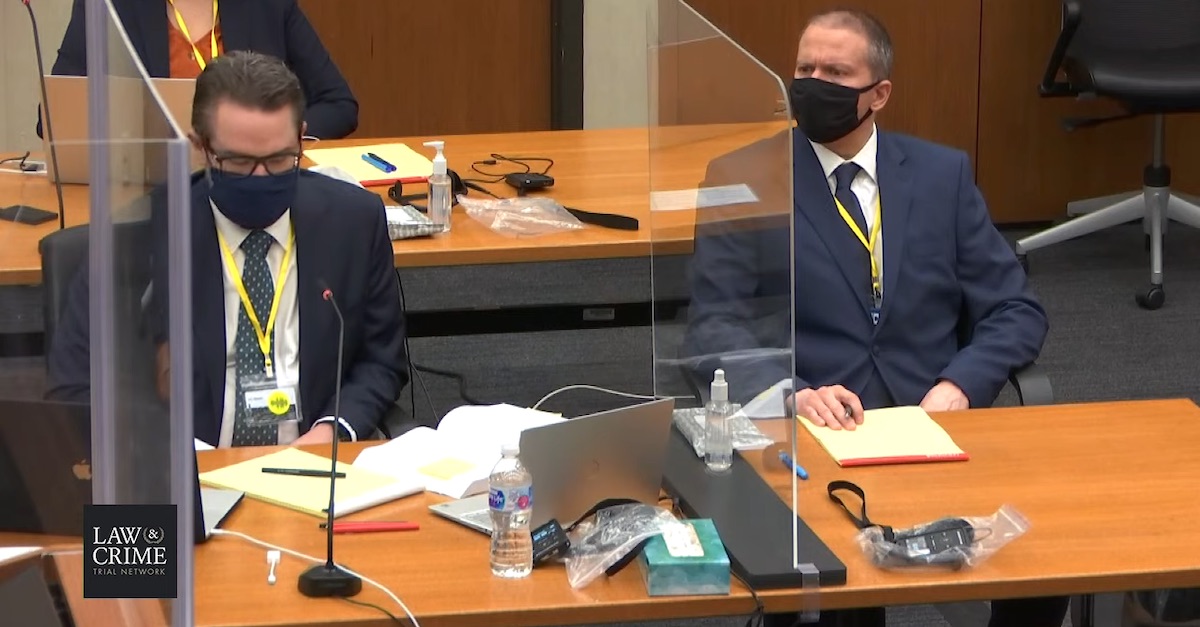 Jury selection for the prosecution of Derek Chauvin was supposed to begin on Monday in Minneapolis, but the proceedings hit a roadblock. The world, forever changed after watching the horrifying video of George Floyd’s last moments as Chauvin kneeled on Floyd’s neck, now looks on as Chauvin is made to answer for his actions. While attitudes about systemic racism may have shifted in the aftermath of Floyd’s death, the mechanics of criminal law have not. The video may well constitute ironclad proof that Chauvin’s conduct was reprehensible, but a murder conviction is anything but a slam-dunk. Here’s why.

Chauvin is charged with second degree unintentional murder and second-degree manslaughter. It’s not clear at this time whether a third-degree murder charge will be reinstated. Minnesota Attorney General Keith Ellison (DFL) officially brings the charges, and the lead prosecutor is assistant attorney general Matthew Frank.

As charged under the Minnesota statute, Chauvin is guilty of unintentional murder in the second degree if he caused Floyd’s death while committing or attempting to commit a felony offense other than criminal sexual conduct in the first or second degree with force or violence or a drive-by shooting. It’s alleged that Chauvin committed third-degree felony assault.

Those who watched the video might think causation is a no-brainer: Chauvin kneeled on Floyd’s neck, suffocating and killing him. However, proof beyond a reasonable doubt requires more, both in this trial and in just about every murder trial. Standard operating procedure is for a medical examiner to testify that whatever actions the defendant undertook were the medical cause of the victim’s death. As anyone who’s seen A Few Good Men enough times to remember lactic acidosis can attest, the science of death can cause major drama during a murder trial.

George Floyd underwent an autopsy. The county medical examiner listed the official cause of death as “[c]ardiopulmonary arrest complicating law enforcement subdual, restraint, and neck compression,” and concluded the manner of death was homicide. [Note that while the conclusion as to homicide is certainly relevant, the medical examiner’s opinion about manner of death is not the same thing as a jury’s determination of legal guilt.]

But that’s not the only thing the ME found. According to the autopsy report, Floyd died of a combination of causes. Floyd not only had underlying health conditions, but was also intoxicated with the drug fentanyl. What’s more, the ME found that Floyd had recently used methamphetamine.

To further complicate matters, Floyd’s family had their own medical analysis conducted, which led to slightly different results. Forensic pathologist Dr. Michael Baden–who is husband of Law&Crime Network host, criminal defense lawyer, and analyst Linda Kenney Baden—said that the cause of death was due to the compression of Floyd’s neck, interfering with blood flow and oxygen going to his brain. Echoing this report, Floyd family attorney Ben Crump has said, “The cause of death was that he was starving for air. It was lack of oxygen. And so everything else is a red herring to try to throw us off.”

Indeed, prosecutors will certainly try to convince the jury that Crump’s take is the right one. George Floyd wouldn’t be the first victim to die at the hands of another while also suffering from his own medical conditions. Generally, the legal principle is that “hastening” someone’s death is equivalent to “causing” their death.

Competing opinions about the science underlying Floyd’s death means multiple expert witnesses and lengthy scientific testimony. Dueling scientific experts is fertile ground for juror confusion and boredom; if the defense successfully raises enough questions about the medical cause of Floyd’s death, the questions alone could dictate an acquittal. After all, the jurors need not decide what was the certain cause of Floyd’s death. All that would be necessary to acquit Chauvin is that the jury find sufficient uncertainty to contradict proof beyond a reasonable doubt.

Causation isn’t the only major hurdle in the prosecution’s case either. The statute also requires proof of what Chauvin had been doing at the time he unintentionally caused Floyd’s death (remember, that criminal statutes must distinguish between those unintentional deaths we wish to criminalize and those that are just unfortunate accidents). Under the law, Chauvin is guilty if he was committing or attempting a felony offense.

Once again, this element promises to tease out the difference between general public opinion and precise legal findings. If Chauvin’s defense team can make a convincing case that he was acting reasonably given the situation, then restraining Floyd would not constitute a felony. It’ll all come down to the specific factual underpinnings of the circumstances. Jurors will consider the facts leading up to Chauvin’s restraint of Floyd. They’ll hear evidence about Chauvin’s moment-by-moment actions, his police training, and both the demands and the norms of police work.

It’s certainly relevant that the nation was traumatized after seeing the graphic footage of Floyd’s death. However, this case won’t be the first time a defendant introduces contextual evidence that could color a jury’s interpretation of actions caught on camera. Expect introductions of everything from Floyd’s personal history to use-of-force experts, all of which have potential to convince a jury that the prosecution’s case isn’t as air-tight as the headlines suggest.

Then there’s the third-degree murder charge.

Prosecutors had initially charged Chauvin with third-degree murder in addition to second-degree murder. However, Hennepin County District Court Judge Peter Cahill dismissed the third-degree murder charge for lack of probable cause, reasoning that a person cannot be guilty of that particular crime when their actions endangered just one person, as opposed to multiple people. Shortly thereafter, the Minnesota Court of Appeals ruled Friday that Cahill “erred” and had to reconsider reinstatement of the charge. On Monday, Cahill said he lacked jurisdiction to do so and that he was prepared to proceed with jury selection on the other charges. But prosecutors petitioned to the appeals court to halt jury selection.

“The State is fully ready to go to trial, but the trial must be conducted in accordance with the rules and the law,” AG Ellison said in a statement. “Now that Mr. Chauvin has stated his intention to appeal Friday’s Court of Appeals ruling to the Minnesota Supreme Court, as is his right, the district court does not have jurisdiction to conduct jury selection or hear and rule on other substantive matters in the trial. We have filed motion with the Court of Appeals to ensure that justice is pursued properly.”

Should the Minnesota Supreme Court ultimately decide to reinstate the third-degree murder charge, it gives prosecutors a very strong fall-back position. A prosecution for third-degree murder would only require proof that Chauvin caused Floyd’s death “by perpetuating an act eminently dangerous to others and evincing a depraved mind, without regard for human life.”

A ruling upholding the dismissal of the third-degree murder charge, on the other hand, would be a serious blow for prosecutors. Second-degree murder carries a potential penalty of 40 years, and third-degree murder carries one of up to 25 years. The maximum penalty for manslaughter is 10 years. If Chauvin were to be acquitted of murder but convicted of manslaughter, he might face around four years behind bars. However, even if found guilty of murder, Chauvin would not likely receive the maximum penalty for any of the relevant crimes. Rather, Cahill would likely follow sentencing guidelines and hand down a sentence unlikely to exceed 10 or 15 years.

[image via via Minnesota Department of Corrections]