The newly released photograph shows three fractures in Epstein’s neck. Baden, who has practiced medicine for nearly 60 years, says those three fractures likely would not have occurred via suicide and were much more consistent with a homicide determination.

Here’s the image in question, along with descriptions of what it shows: 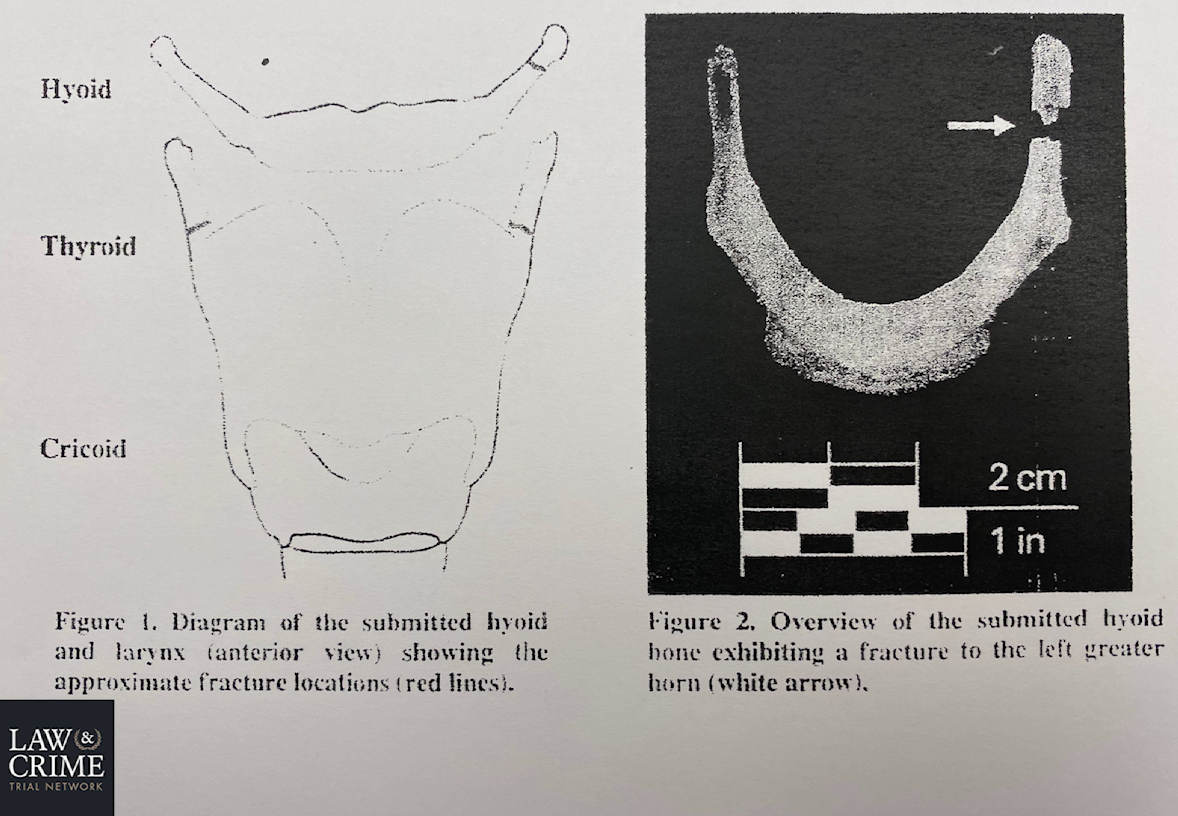 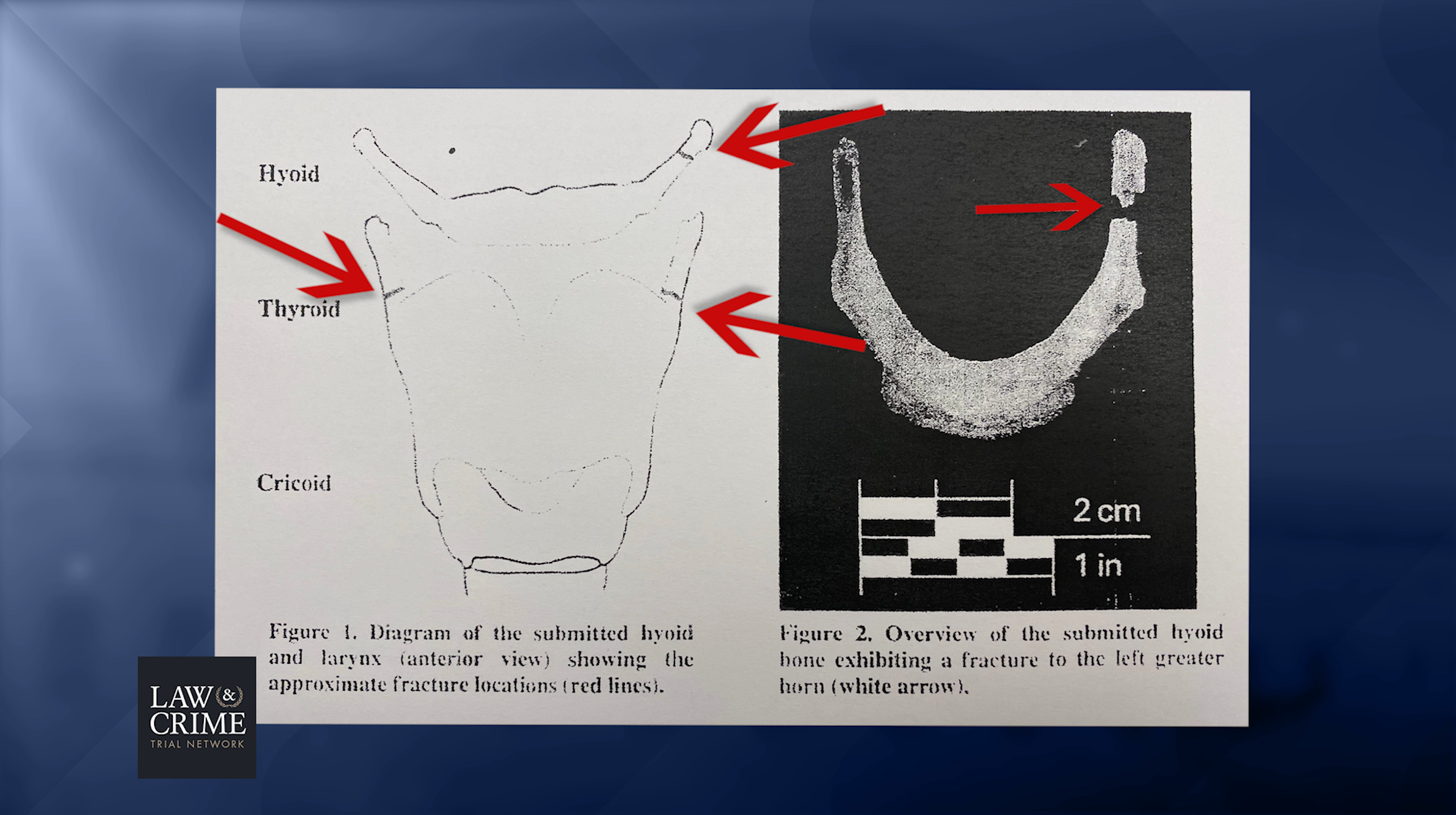 Baden shared his professional opinion as a board-certified pathologist as a guest on the Law&Crime Network on Wednesday. During that broadcast, he said that Epstein was more likely strangled than guilty of felo-de-se.

Baden was hired by Epstein’s brother Mark Epstein to observe the autopsy after the alleged sex-trafficker was discovered dead in his Manhattan prison cell on August 10–less than a week after he was taken off suicide watch by officials at the Metropolitan Correctional Center, which is administered by the federal Bureau of Prisons.

On August 16, New York City’s Office of Chief Medical Examiner issued a finding that determined Epstein’s cause of death was a “hanging” caused by “suicide.”

Baden pushed back against the city’s determination. He told the Law&Crime Network’s Brian Ross that the initial forensic pathologist who examined Epstein was “inconclusive as to whether it was a suicide.” Additionally, Baden said that a “higher-up” made the final decision by “checking the suicide box.”

The celebrated pathologist first rose to national prominence when he served as chair of the House Select Committee on Assassinations’ Forensic Pathology Panel which reviewed the Warren Commission‘s autopsy findings viz. the death of former president John F. Kennedy.

Baden was asked about the multiple fractures in Epstein’s neck during his Wednesday afternoon appearance on the Law&Crime Network. He said those fractures more likely evidenced homicide than suicide.

“This usually does not happen in suicidal hangings because the ligature goes up under the mandible–the jaw bone–which is a tough bone,” he said. “It doesn’t fracture. In manual strangulation–or ligature strangulation–fractures can occur.”

During that segment, he said that in several decades of examining human corpses, he’s never seen an instance in which an individual who allegedly committed suicide sustained two fractures in the thyroid cartilage and one fracture in the hyoid bone.

Those three fractures are extremely unusual in suicidal hangings and could occur much more commonly in homicidal strangulation. I’ve not seen in 50 years where that occurred in a suicidal hanging case.

Legal experts were summarily “stunned” by the lack of attention paid to that highest-of-profile federal inmate. Many commentators expressed outright doubt and disbelief that Epstein killed himself while awaiting trial as he was said to be armed with extensive knowledge of other powerful men who allegedly took part in a global elite conspiracy to traffic and rape young women and/or girls.

Skepticism further spiked when it was revealed that Epstein’s death had first been mentioned on the anonymous 4chan forum and that prison guards who were supposed to have been watching him allegedly falsified prison logs on the night of his apparent suicide.

Rumors of Epstein’s alleged activities on the so-called “Lolita Express” and his private island, Little Saint James, had been bandied about on the internet for over a decade. Those suspicions were further inflamed after Gawker published flight logs purporting to show that former president Bill Clinton was one of Epstein’s frequent guests.

In 2007, the U.S. Attorney for the Southern District of Florida quietly entered into a secret, much-derided non-prosecution agreement with Epstein which ensured the multimillionaire and his alleged co-conspirators would not be prosecuted federally in exchange for a guilty plea on run-of-the-mill state prostitution charges.

The man in charge of that investigation, then-federal prosecutor Alex Acosta (who would later serve as President Donald Trump‘s secretary of labor before resigning due to his involvement in the Epstein affair) would later say he was told Epstein “belonged to intelligence” and to keep the gloves on when handling the well-connected hedge fund manager–Acosta then refused to elaborate.

Epstein’s connections apparently got him a slap on the wrist and he served 13 months in a county jail and home detention for solicitation and procurement of minors for prostitution after he admitted to paying for nude massages that often turned sexual. Epstein’s alleged co-conspirators were all shielded from prosecution under the extraordinary and unprecedented agreement and an ongoing probe by the Federal Bureau of Investigation (FBI) was shuttered.

In late 2018, the Miami Herald‘s investigative reporter Julie Brown renewed interest in the Epstein scandal through the publication of her earth-churning “Perversion of Justice” series.

In that harrowing collection of exposé-after-exposé, Brown unearthed multiple courthouse documents that outlined the extent of the agreement between Acosta’s office and the dead pedophile–including the fact that the multi-millionaire was allowed to leave the jail and work from for much of the time under the auspices of “work release” during his uncharacteristically lenient sentence.