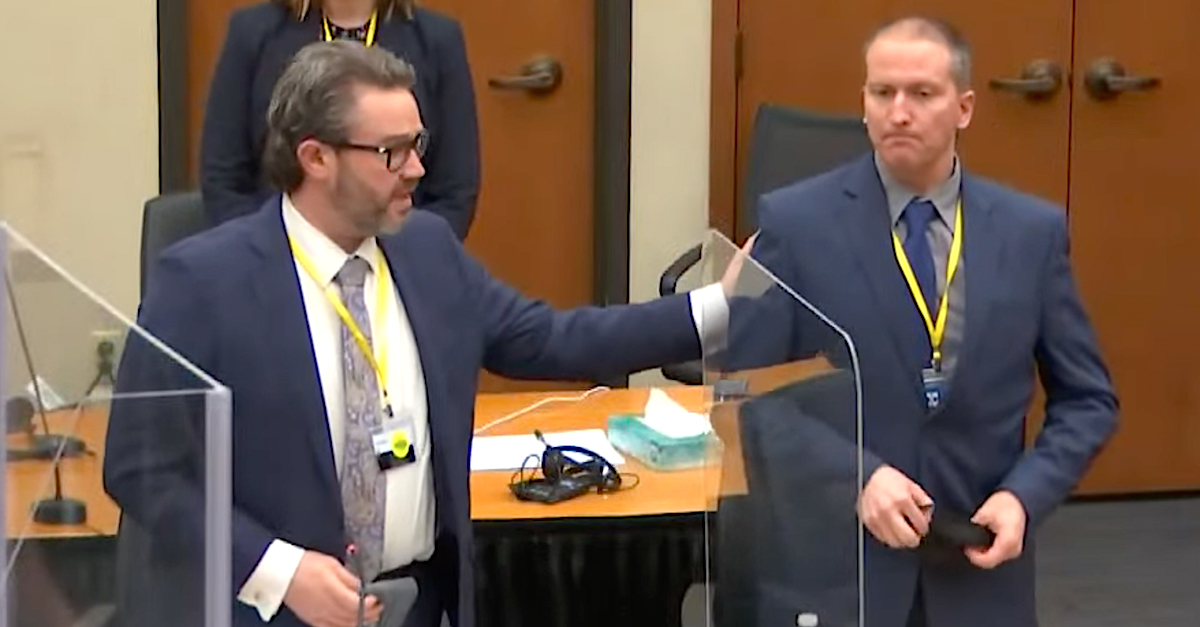 The attorney representing Derek Chauvin, the former Minneapolis police officer convicted of murder and manslaughter charges in the death of George Floyd, Jr., has asked the judge overseeing the matter to order a new trial. The four-page motion, filed Tuesday afternoon, asks in part for a “hearing to impeach the verdict” — an attempt to force jurors to explain, with some limits, what occurred during deliberations. It also alleges a litany of other deficiencies by the judge and, to a lesser extent, by prosecutors in the high-profile, highly watched proceeding.

As to the request to “impeach the verdict,” Chauvin’s attorney, Eric J. Nelson, explained in the motion that he believes “the jury committed misconduct, felt threatened or intimidated, felt race-based pressure during the proceedings, and/or failed to adhere to instructions during deliberations, in violation of Mr. Chauvin’s constitutional rights to due process and a fair trial.”

An underlying Minnesota Rule of Criminal Procedure states that “[a]t an impeachment hearing, jurors must be examined under oath and their testimony recorded” pursuant to the Rules of Evidence. The requisite Rule of Evidence provides more detail about the procedure at such a “hearing to impeach the verdict.” It reads:

Upon an inquiry into the validity of a verdict or indictment, a juror may not testify as to any matter or statement occurring during the course of the jury’s deliberations or to the effect of anything upon that or any other juror’s mind or emotions as influencing the juror to assent to or dissent from the verdict or indictment or concerning the juror’s mental processes in connection therewith, except that a juror may testify on the question whether extraneous prejudicial information was improperly brought to the jury’s attention or whether any outside influence was improperly brought to bear upon any juror, or as to any threats of violence or violent acts brought to bear on jurors, from whatever source, to reach a verdict, or as to whether a juror gave false answers on voir dire that concealed prejudice or bias toward one of the parties, or in order to correct an error made in entering the verdict on the verdict form. Nor may a juror’s affidavit or evidence of any statement by the juror concerning a matter about which the juror would be precluded from testifying be received for these purposes.

The bulk of the motion is premised on a Minnesota Rule of Criminal Procedure which allows defense attorneys to ask for, and judges to grant, “a new trial on the issue of guilt or the existence of facts to support an aggravated sentence, or both.” The relevant rule allows seven possibilities for such an order:

1. The interests of justice;
2. Irregularity in the proceedings, or any order or abuse of discretion that deprived the defendant of a fair trial;
3. Prosecutorial or jury misconduct;
4. Accident or surprise that could not have been prevented by ordinary prudence;
5. Newly discovered material evidence, which with reasonable diligence could not have been found and produced at the trial;
6. Errors of law at trial, and objected to at the time unless no objection is required by these rules;
7. A verdict or finding of guilty that is not justified by the evidence, or is contrary to law.

Nelson further alleges that trial judge Peter Cahill abused his discretion multiple times, including (a) by denying a defense request for change of venue; (b) by denying a previous motion for a new trial based on the effects of pretrial publicity; and (c) by failing to sequester the jury.

Pausing briefly in a rebuke against the judge, Nelson said (d) that prosecutors “committed pervasive, prejudicial prosecutorial misconduct” by “disparaging the Defense; improper vouching; and failing to adequately prepare its witnesses.”

Then, Nelson returned his focus on the judge by arguing that the court (e) should have ordered Floyd’s friend, Morries Hall, to testify; (f) failed to adequately explain the law to the jury; (g) permitted the state to present “cumulative evidence;” (h) allowed the state to ask leading questions of witnesses on direct examination; and (i) “failed to order that a record be made of the numerous sidebars that occurred during the trial.”

“The cumulative effect of the multiple errors in these proceedings deprived Mr. Chauvin of a fair trial, in violation of his constitutional rights,” Nelson said. He then quoted a Minnesota appeals court case to argue that “when the cumulative effect of numerous errors — even if, alone, the errors are harmless — constitutes the denial of a fair trial, the defendant is entitled to a new trial” (internal punctuation omitted).

The terse motion also asks the court for additional time to fully brief and argue the legal points raised therein.