Jon L. Schoenhorn, the attorney for Connecticut criminal defendant Michelle Troconis, filed motions on Tuesday claiming the state withheld exculpatory evidence, demanding that charges be dropped, arguing certain charges were based on false information in an affidavit, and asserting that certain conditions of Troconis’s release shoulder be removed.

Troconis is charged with helping hide the evidence that her then-boyfriend Fotis Dulos murdered his estranged wife Jennfer Farber Dulos on May 24, 2019. The case now stretches into the middle of its second year. The alleged killer died by suicide, and recurring efforts to find the victim’s body have so far turned up nothing. That just leaves Troconis (who has pretty much disowned her now-dead ex-boyfriend), and Fotis Dulos’s friend and attorney Kent Mawhinney  facing charges in the alleged murder conspiracy.

Schoenhorn, representing Troconis, now takes aim at the affiant whose statements led a judge to issue a warrant for Troconis’s arrest. He argues that the affiant mislead a judge in writing that Fotis Dulos drove a black Ford Raptor, “stopping at over thirty locations along a more than four mile stretch of Albany Avenue between Baltimore and Edward Streets.” This was apparently meant to mislead the judge into thinking that Dulos discarded evidence at 30 locations, but video reviewed by authorities only showed him making three stops on Albany Avenue, according to the motion.

Also, the defense said that the affiant omitted the fact that video only showed the male occupant of the vehicle stepping out — never the woman. The defense also maintained that the affiant was being misleading by saying Troconis refused to cooperate even though a detective noted that she consulted with her then-attorney at the time.

“The arrest and prosecution is based on evidence unconstitutionally obtained by law enforcement that constitutes the ‘fruit’ of unlawful searches and seizures, as evidence[d] by separate pending motions to suppress filed by the defendant,” the motion states.

The exculpatory evidence motion continues a theme from last year, when Schoenhorn described Mawhinney as a jailhouse informant. Schoenhorn is maintaining that authorities are keeping Troconis’s defense in the dark about what promises law enforcement made to Mawhinney in return for his alleged cooperation. From one of the documents filed Tuesday (emphasis ours):

In further support hereof, the undersigned represents that he has reviewed the nearly three hours of police interview conducted with cooperating co-defendant and jailhouse informant Kent Mawhinney held at the Department of Public Safety’s polygraph unit in Meriden on August 31, 2020, and it is readily apparent that: (1) Mawhinney expected specific consideration from the state in exchange for “cooperation,” verbally stating in response to a question that he was motivated by his desire to be released from custody (“I want out!”), while continuing to deny any involvement in a criminal conspiracy; (2) that subsequent thereto, the state – without objection agreed to the change in conditions for release and then convinced the court, without hearing, to reduce the bond to the amount proposed by Mawhinney’s attorneys; and (3) four law enforcement officers participating in the session with Mawhinney (in addition to his lawyers) took and shared contemporaneous notes during the questioning (see attached Exhibit A). There is still no answer to defendant’s query why Mahinney’s interrogation occurred at the State Police polygraph unit in Meriden, and what promises were made to him.

This is exhibit A included in the motion: 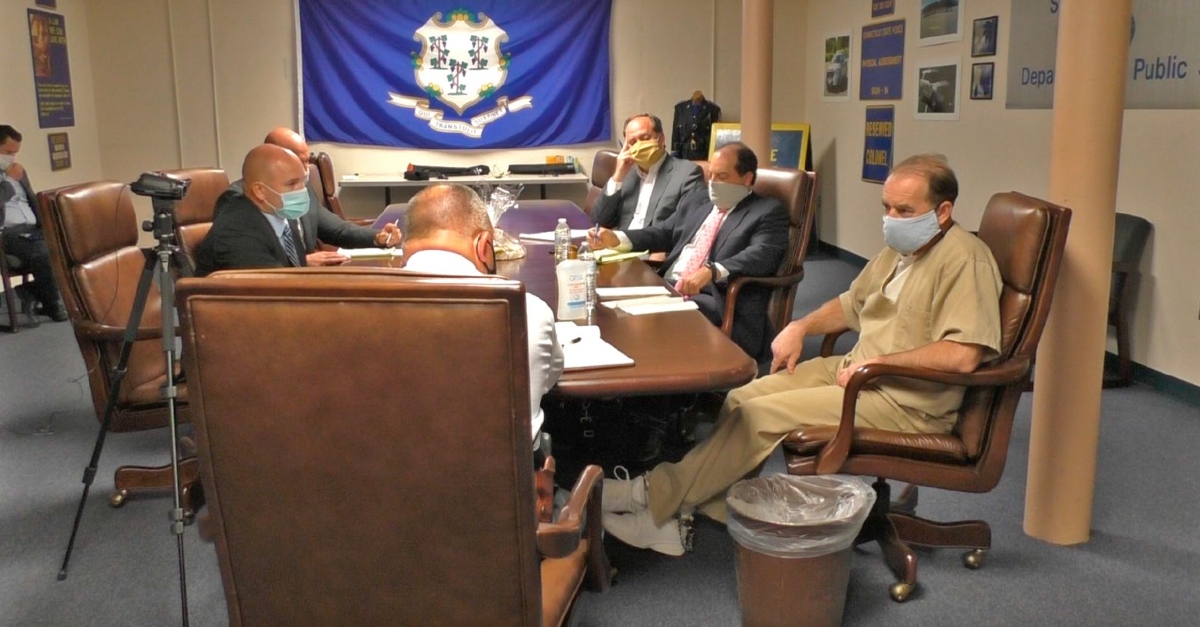 Now the Troconis defense is moving for sanctions against the state.

Mawhinney’s defense did not immediately respond to a Law&Crime request for comment. Neither did prosecutors.

Schoenhorn also argues against electronic and GPS monitoring, asserting this constitutes both punishment, and unreasonable search and seizure.

Michelle Troconis: Motion to Dismiss by Law&Crime on Scribd

Michelle Troconis: Motion for Modification and Conditions for Release by Law&Crime on Scribd

Michelle Troconis: Motion to Compel – Mawhinney by Law&Crime on Scribd

[Image of Troconis via The Law&Crime Network/Pool]