‘Brought the Government to a Screeching Halt’: Judge Sentences Former School Board President to 60 Days for Jan. 6 Capitol Breach 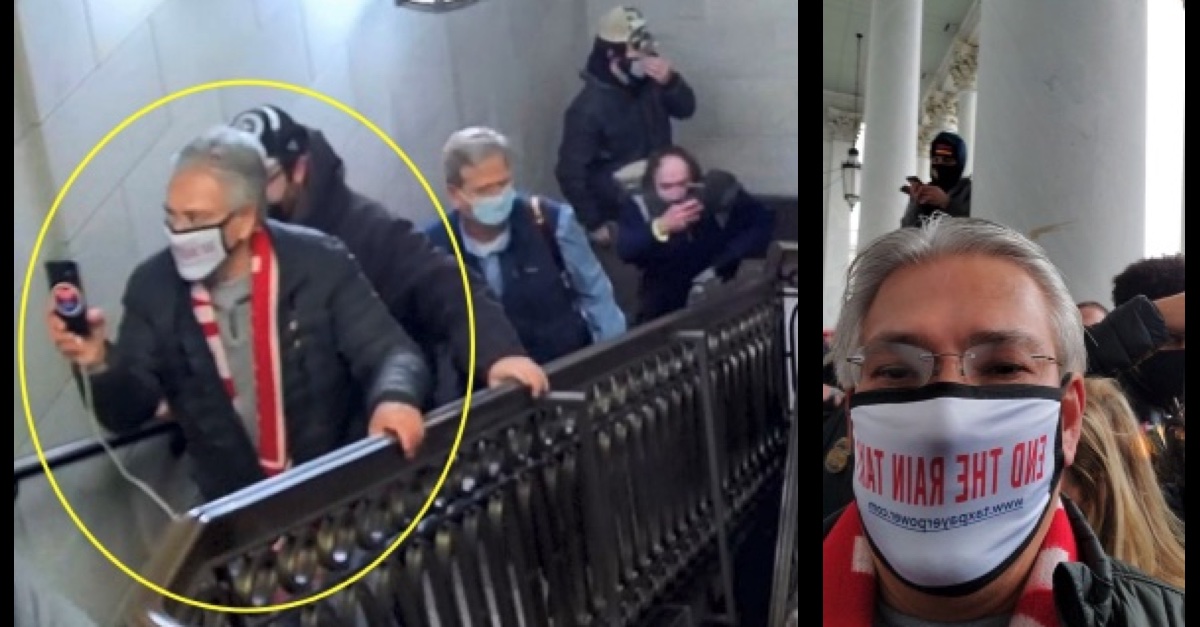 The Pennsylvania man who recorded himself entering the Capitol building on Jan. 6 after two officers near him were assaulted has been sentenced to 60 days in prison—more than four times the two weeks the government had requested.

U.S. District Judge Royce Lamberth told Frank Scavo, a former school board president who organized charter buses to take people to the Capitol for the Jan. 6 Donald Trump rally, that he needed to be held accountable for his actions on that day.

“I give you credit for what you did right,” said Lamberth. “[But] without you and other people who participated in this, this whole event … would not have happened, and it brought the government to a screeching halt that day.”

Prosecutors asked for 14 days of incarceration for a misdemeanor count of parading, demonstrating or picketing inside a Capitol building. Scavo was not accused or convicted of the assaults surrounding him. Lamberth’s sentence goes far beyond the recommended sentence.

After Jan. 6, Scavo gave multiple interviews to local media about his participation in the Jan. 6 Capitol breach, and also made multiple social media posts, including expressing delight that the riot delayed the electoral college certification of the 2020 presidential election results. He also made his Facebook profile picture a satirical cartoon of him driving a “Sedition Express” bus, adding that he was a “tour guide of the Capitol.”

Prosecutors said Scavo’s post-Jan. 6 actions indicate he didn’t grasp or accept the seriousness of the events and his participation in them.

In speaking to Lamberth, Scavo said that he regrets his actions on that day and talked about recent volunteer work he has done, including picking up trash along the highway and serving food at a soup kitchen, as a way of making amends.

“I have tried to engage in several activities in and around Scranton to demonstrate my commitment to public good,” he said.

Scavo and his lawyers also emphasized how Scavo cooperated with authorities once he learned he was under investigation.

“I provided them with my cell phone and videos I had taken on Jan. 6 at the Capitol,” Scavo said. “I worked with my lawyers to minimize the effort the court system would have to put into my case.”

But according to Lamberth, it wasn’t enough.

“The consequences and the seriousness of the consequences to the nation of what happened here has to be weighed in the balance” of determining the sentence, Lamberth said.

Lamberth also saw red flags in Scavo’s sentencing memo, which implied that Scavo entered the Capitol building through open doors, suggesting that there were no attempts to stop him and others who breached the Capitol that day.

“I was concerned about the response you filed to the government’s sentencing memo because it looked to me like a quibble,” Lamberth said to defense attorney Ernest Preate Jr. “It looked to me dangerously like what the defendant [Jacob] Chansley had said to me at the outset of his case, that he walked in open doors. Your client did not walk in an open door. It was opened, but it was opened by other demonstrators.”

In a letter he read out loud to Lamberth in court, Scavo said that he was only in front of the doors to the building taking pictures of himself when the crowd surrounded him, forcing him in.

“The mob surrounded me,” Scavo said, saying that he couldn’t get out of the crowd because of his “small size.”

“How he didn’t turn around and leave is still a problem for my thought process,” Lamberth also said.

During the hearing and in filings, the government had pointed out that Scavo took a video of himself saying “Here we go” before entering the Capitol, where he spent around 10 minutes roaming the building. He had also been near, and perhaps witnessed, assaults on police officers trying to control the crowd.

In addition to the 60 days in prison, Lamberth imposed a $5,000 fine on Scavo, the maximum allowed under the offense to which Scavo pleaded guilty.

Lamberth said he will allow Scavo to surrender to authorities after the new year.

“From the point the gig was up, you’ve done everything you could,” Lamberth said to Scavo at the end of the hearing. “Good luck to you.”