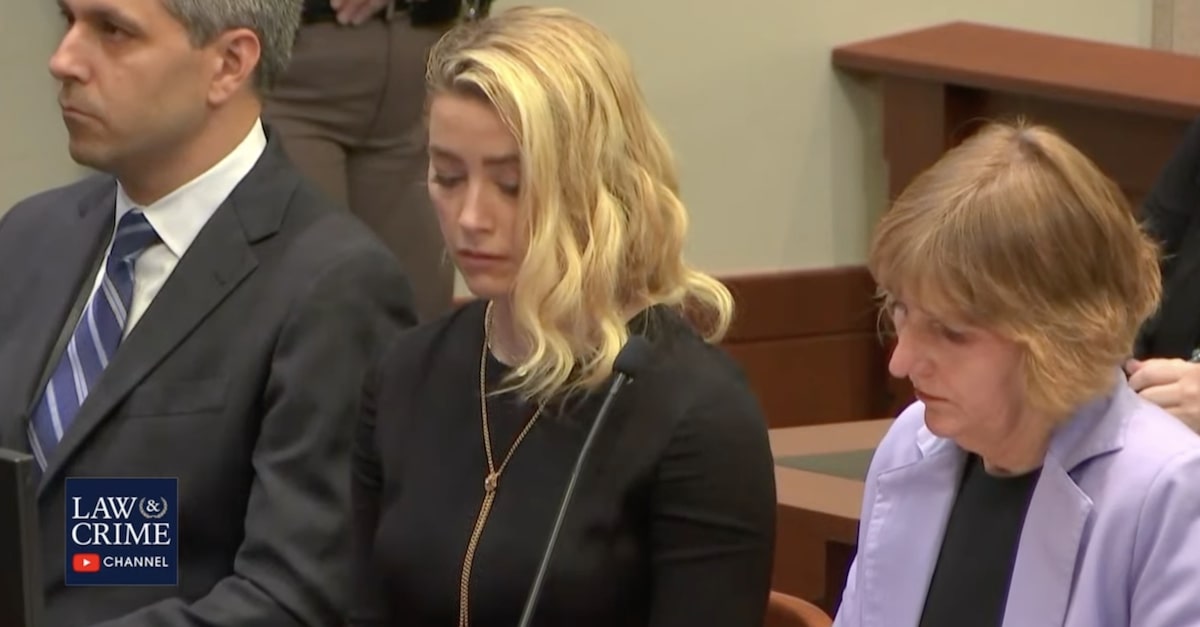 Amber Heard looks downcast during the recitation of the jury’s verdict in favor of Johnny Depp. (Photo via Law&Crime Network)

A Virginia judge refused to set aside a verdict forcing Amber Heard to pay $10.35 million to her ex-husband Johnny Depp in defamation damages based on claims that a juror who wasn’t summoned sat on the panel.

“Defendant does not allege Juror 15’s inclusion on the jury prejudiced her in any way,” Fairfax County Circuit Court Judge Penney Azcarate wrote in a three-page order, with two pages of exhibits. “The juror was vetted, sat for the entire jury, deliberated, and reached a verdict. The only evidence before this Court is that this juror and all jurors followed their oaths, the Court’s instructions, and orders. This Court is bound by the competent decision of the jury.”

After the trial, Heard’s attorneys claimed to have learned that Juror 15 was born in 1970, but the person summoned for duty was born in 1945. That would have made the summoned juror 77 at the time of the trial, her lawyers asserted.

Heard’s attorney Elaine Bredehoft supplied no evidence that Juror 15 was biased against her client in any way.

“The parties also questioned the jury panel for a full day and informed the Court that the jury panel was acceptable,” Azcarate wrote. “Therefore, due process was guaranteed and provided to all parties in this litigation. Voir dire was conducted in a fair and impartial manner, with the Court and both parties examining the potential jurors. There is no evidence of fraud or wrongdoing.”

“Further, the Defendant was provided the jury list five days prior to the commencement of trial and knew or should have known about the mistake at any time during the seven-week pendency of this trial,” her order continues. “She had every opportunity to object to or to voir dire on the issue.”

Depp sued Heard over a 2018 Washington Post editorial under the latter’s byline. Heard described herself as a “public figure representing domestic abuse.” The op-ed did not mention Depp’s name but alluded indirectly to her filing for a restraining order two years earlier. The Pirates of the Caribbean actor sued under the doctrine of defamation by implication.

In post-trial motions, Heard’s legal team challenged the verdict on numerous grounds, including the controversy around the jury. Azcarate’s ruling provides written reasoning only as to that issue.

The judge cited the Virginia code for the proposition that the alleged discovery about the juror did not provide grounds to attack the verdict.

“Any error in the information shown on such copy of the jury panel shall not be grounds for a mistrial or assignable as error on appeal, and the parties in the case shall be responsible for verifying the accuracy of such information,” the commonwealth’s relevant code states.

The jury also ruled that Depp defamed Heard to the tune of $2 million when his lawyer Adam Waldman said that the Aquaman actress and her friends set Depp up by calling police and roughing up the property.  Despite that win for heard, the awards were, to the tune of several millions of dollars, largely in Depp’s favor.

Depp and Heard’s press representatives declined to comment on the ruling.