Amber Heard Says Social Media ‘Hate and Vitriol’ Made Johnny Depp Verdict Preordained: ‘How Could They Not Come to That Conclusion?’ 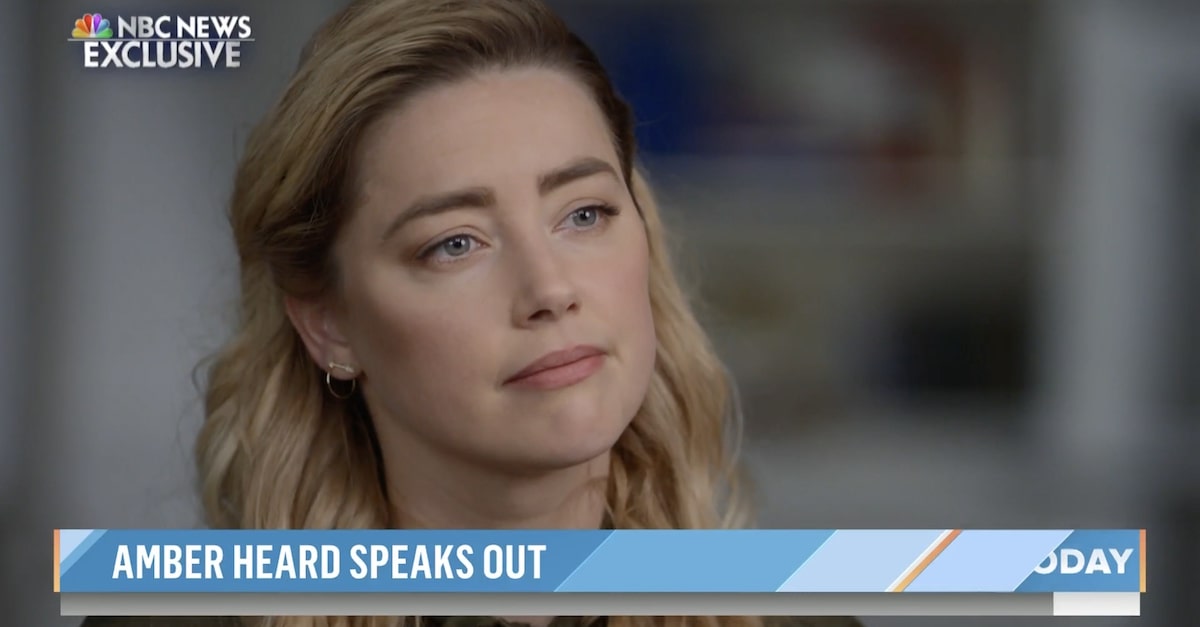 Actress Amber Heard blamed the relentless social media attacks against her for her defeat in her defamation battle against ex-husband Johnny Depp.

With the bulk of Twitter and TikTok joining Depp’s witnesses in depicting her as a liar, Heard told NBC’s Savannah Guthrie of the jury: “How could they not come to that conclusion?”

“They had sat in those seats and heard over three weeks of non-stop, relentless testimony from paid employees [of Depp] and toward the end of the trial, randos, as I say,” Heard said with a laugh.

Earlier this month, a Virginia jury returned a verdict overwhelmingly in Depp’s favor, accepting each of the Pirates of the Caribbean actor’s defamation allegations and granting him $15 million. That award was later reduced to $10.35 million to comport with the state’s cap on punitive damages.

Jurors credited only one of Heard’s counterclaims, which related to a statement Depp’s attorney Adam Waldman made about the Aquaman actress’s friends. Heard received far less in damages: $2 million.

Heard’s attorney Elaine Bredehoft promised to appeal. In a previous interview with Guthrie, she claimed evidence proving her client’s allegations was wrongly “suppressed” and that jurors were tainted by the media firestorm surrounding the case. Unflattering hashtags propagated throughout the trial, including #WeJustDontLikeYouAmber, #AmberHeardIsAnAbuser, and #AmberTurd, a reference to Depp’s allegation that Heard defecated on a bed as a practical joke.

“Even somebody who is sure I’m deserving of all this hate and vitriol, even if you think that I’m lying, you still couldn’t tell me—look me in the eye and tell me—that you think on social media there’s been a fair representation,” Heard told the network. “You cannot tell me that you think that this has been fair.”

Heard’s team has been quick to note the discrepancy between the U.S. and U.K. verdicts. In Virginia, Depp sued Heard over a 2018 op-ed published in The Washington Post stating that she became “a public figure representing domestic abuse” the year she sought a restraining order against him. Depp, who has vehemently denied those allegations, has cast Heard as the abuser.

By contrast, the London case arose after Depp sued The Sun, a British newspaper, over an editorial flatly calling him a “wife beater.” A high court judge in that case found that characterization “substantially true,” believing 12 out of 14 alleged incidents of domestic violence. The judge also disbelieved that Heard ever soiled the marital bed, blaming that incident on a Yorkshire terrier with bowel control issues from eating Depp’s cannabis.

Bredehoft noted that the Virginia jurors were not informed about the U.K. judge’s ruling, though they heard about the existence of those proceedings throughout the U.S. trial.

In an interview with Law&Crime, Depp’s lawyer Benjamin Chew criticized Bredehoft for impugning the jury.

“It seemed to cast aspersions on the jurors’ integrity because as you know they took an oath not to watch social media, and there’s no reason to believe that they didn’t,” Chew said. “So to hear such a baseless claim was disappointing.”

#JohnnyDepp attorney #BenChew expressed disappointment with #AmberHeard attorney #ElaineBredehoft‘s comments that the jury was tainted by publicity in an interview with Law&Crime’s Jesse Weber. pic.twitter.com/iseP8iNgjT

The U.K. trial also featured more permissive rules regarding the admission of evidence, as that case did not have a jury. Chew called it “absurd” for Heard’s legal team to cast admissibility requirements for evidence under the U.S. system as a scheme to suppress facts.

“As you know, there are rules of evidence, and both sides had evidence that was excluded for proper evidentiary reasons,” Chew told Law&Crime Network host Jesse Weber, who is also an attorney.

At one point in her interview, Heard suggested the jurors were starstruck by her more famous ex-husband.

“I don’t blame them. I actually understand,” she said. “He’s a beloved character, and people think they know him. He’s a fantastic actor.”

Guthrie pushed back that jurors’ job is to avoid being “dazzled” and examine the facts and evidence. Her full interview with Heard is expected to air on Tuesday and Wednesday on the TODAY show and in an hour-long special on Friday on Dateline.