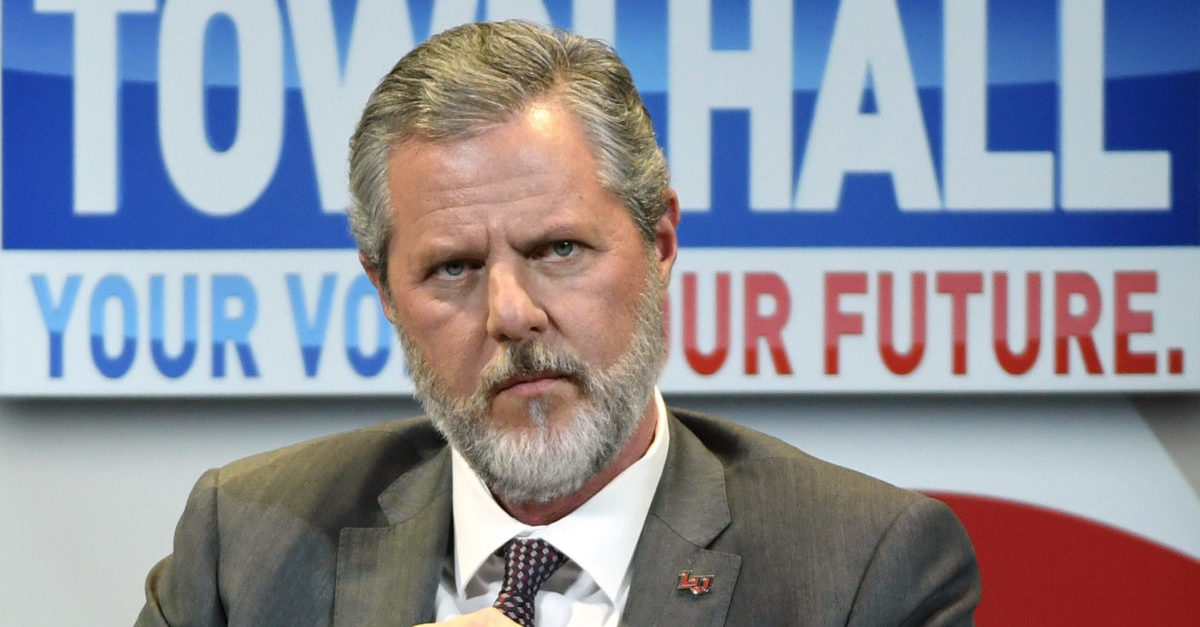 Liberty University, the private Evangelical Christian college in Lynchburg, Va., has successfully sought arrest warrants against a ProPublica reporter and a New York Times photographer who were on campus recently to document the university’s response to the COVID-19 pandemic. But will this case actually go somewhere? Legal authorities indicate that the reporters have decent arguments to make in their defense, and there’s no guarantee a prosecutor will give Falwell’s gripe serious consideration.

Liberty, per NBC News, has kept its campus open — but not completely open — as the coronavirus swept across the land. Liberty University President Jerry Falwell Jr., said international students who could not return home were allowed to remain on campus, but the rest of Liberty’s students were attending classes remotely. The New York Times reported otherwise and said some students were called back to clean out their rooms. The Times report generally characterizes Falwell’s response to the virus as vacillating in general and alarming to several nearby officials, whom it characterized as “furious.”

As to the arrest warrants sworn out against the two journalists, Fallwell said that “[w]hen people are coming from known hot spots, we feel we owe it to our students and our parents not to let that happen … [t]he only way to send the message is to let them know they will be prosecuted.” Falwell also said that other universities have remained conditionally open for some students and that his college was being picked on because of his support for President Donald Trump.

The New York Times, in its updated report which now reflects that a Liberty student has actually tested positive, noted that several students who returned to Liberty’s campus were from the New York city area. So, Falwell’s claim that the New York Times should be barred because it might be spreading the virus seems dubious at best.

“It’s going to be an ugly legal fight, I’m sorry to say,” Falwell told conservative radio host Todd Starnes in a Wednesday conversation detailed by the Lynchburg, Va. News & Advocate. “But I feel like they’ve forced us into a corner and I don’t think God wants Christians to sit back and not protect what they believe in.”

At first blush, this might look like a battle which pits the First Amendment against the First Amendment. Liberty University has a right to assemble and worship, and reporters have a right to assemble and report. With the right to report the news is a concomitant right to gather it. That right has been discussed in many court cases over the years, including Branzburg v. Hayes at the U.S. Supreme Court: “without some protection for seeking out the news, freedom of the press could be eviscerated.” But Hayes in 1972 also presented a time-tested list of areas where news reporting can be hindered, such as judicial deliberations and the meetings of private organizations.

While there is a general constitutional right to gather the news, the news may not be gathered everywhere. Exactly where the news is gathered is at issue here.

Under Virginia law, trespassing occurs where:

[A]ny person without authority of law goes upon or remains upon the lands, buildings or premises of another … after having been forbidden to do so, either orally or in writing, by the owner, lessee, custodian, or the agent of any such person, or other person lawfully in charge thereof, or after having been forbidden to do so by a sign or signs posted … at a place or places where it or they may be reasonably seen.

There is wiggle room in that statute for the journalists to defend themselves. The first legal question is whether signs were posted at the Liberty University campus. If Liberty is like almost every other campus everywhere, signs were probably posted. The next legal question is whether any of the people the reporter or photographer interviewed agreed to allow the journalists to accompany them. The New York Times report mostly quotes students, parents, and faculty who have spoken on social media; the ProPublica report presents in-person interviews and observations about dorms and the university’s student union building — places where students might legally be deemed ‘lesees’ and thus legally able to consent to the presence of visitors.

The case, assuming prosecutors move it forward, will almost certainly be a test of those facts and that statute. There is no true First Amendment defense to trespass. A 1939 California case which alleged trespass against journalists ended not because the journalists had a right to steal a photo of a suicide victim from her home but because the plaintiff in the case, the victim’s husband, could not prove it was the journalists took it. (The police apparently also had the same photo.) The court explained why the plaintiff lost his trespassing case:

In the case before us there is no evidence to refute the inference that the [Los Angeles] Examiner obtained its “copy” of the likeness of plaintiff’s wife by preparing its own picture of such likeness from the photograph while the latter was in the custody of the Los Angeles police. At the trial plaintiff did not choose to place upon the witness-stand any witness from the police department as to whether the photograph was taken by the police or was in their possession as contended by defendant.

An outlying Florida case from 1976 found no trespass where a news photographer was invited to take pictures at a deadly fire scene where the fire marshal’s official photographer ran out of film and the marshal needed evidence.  However, another Florida case in 1976 was more caustic when it determined a news crew did commit trespass when it followed a team of 50 officers who were executing a midnight search warrant on school grounds. The authorities were investigating allegations that students were locked up for days and that “rampant sexual conduct” was occurring between students and faculty. Even though the authorities invited the news crew to come on the raid, the court said the situation was something out of Hitler’s playbook:

To uphold [the reporters’] assertion that their entry upon [school’s] property at the time, manner, and circumstances as reflected by this record was as a matter of law sanctioned by “the request of and with the consent of the State Attorney” and within the “common usage and custom in Florida” could well bring to the citizenry of this state the hobnail boots of a nazi stormtrooper equipped with glaring lights invading a couple’s bedroom at midnight with the wife hovering in her nightgown in an attempt to shield herself from the scanning TV camera. In this jurisdiction, a law enforcement officer is not as a matter of law endowed with the right or authority to invite people of his choosing to invade private property and participate in a midnight raid of the premises.

In 1999, the U.S. Supreme Court cleaned up the matter nationwide when it held that it is a violation of the Fourth Amendment for officers to invite journalists into private homes while executing a warrant — unless journalists are actually helping with the execution. In so holding, the Court cited a now-famous 1604 case out of England: “the house of every one is to him as his castle and fortress, as well for his defence against injury and violence, as for his repose.”

It remains to be seen whether the local prosecutor will actually move forward with the case. Per the local newspaper:

Lynchburg Commonwealth’s Attorney Bethany Harrison said Thursday that Liberty police did not consult her office before asking a magistrate to approve the charges and prosecutors have not decided whether to pursue the case. As of Thursday, no charges have been formally filed in court.

“I don’t have enough information to give an informed comment at this time,” Harrison said of the trespassing allegations.

As the New York Times and ProPublica reports suggest, Liberty University is Jerry Falwell Jr.’s castle, the New York Times itself is “conspicuously unavailable” in the library, and trespassing charges can be brought against reporters. Don’t expect a First Amendment defense to work here. Arguing consent or a lack of signage might.