An Impeachment of Andrew Cuomo Will Be a Giant Mess. Here’s Why. 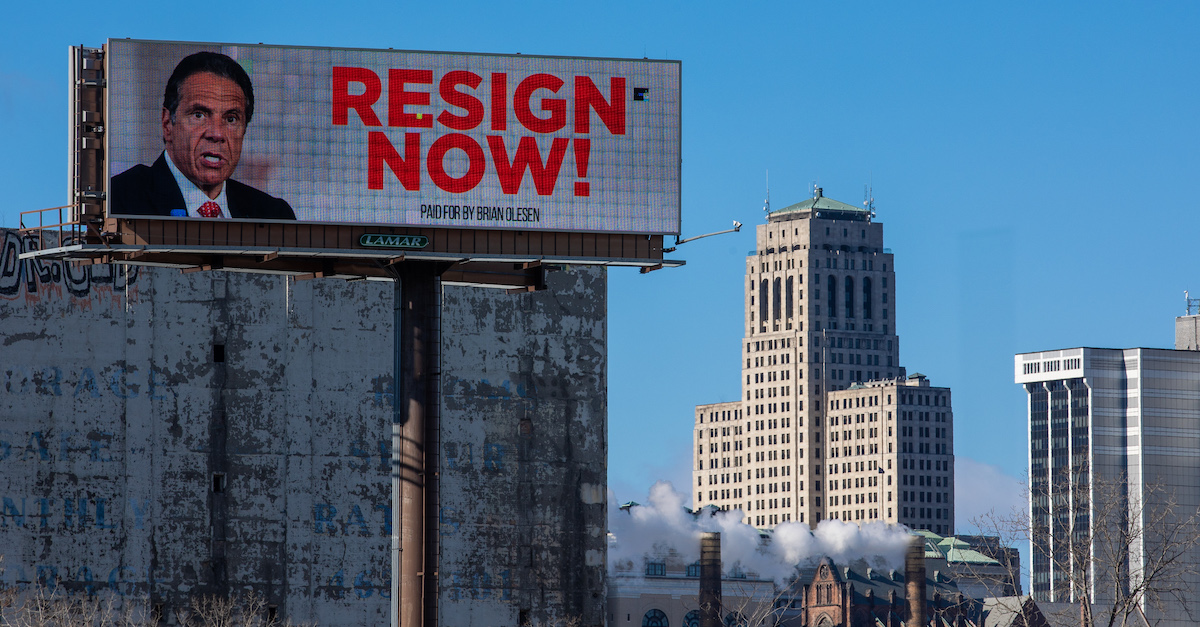 The New York State Assembly announced Thursday that it will begin an “impeachment investigation” into New York’s sitting governor, Andrew Cuomo. Any attempt to impeach the Democrat will proceed against the backdrop of the two-front war in which the second-generation governor is already embroiled. While it may sound like Cuomo is about to suffer a dramatic end to a storied political career, the reality promises a jumbled legal-political mess, supersized to a degree custom-fit for New York.

Remember the incessant debates over whether Donald Trump’s actions were really “high crimey and misdemeanory” enough for impeachment? New York doesn’t even have that standard.

The New York constitution has been rewritten multiple times. The 1777 version said “mal- and corrupt conduct.” The 1821 version said “high crimes and misdemeanors,” just like the U.S. Constitution—but that’s not the current version. The one New York is using now lays out the process for impeachment, but not the basis for it.

1/ Also, if you think the federal constitution’s impeachment standard is ambiguous….
The New York Constitution has NO standard for impeachment at all. None. It says the state’s Assembly (equivalent of the House) has the authority to impeach. But it doesn’t say what for. https://t.co/ksEvPTvaJg

While the state’s constitution doesn’t specify what kind of conduct is impeachable, there is a separate New York statute that refers (albeit obliquely) to what would count.

Section 240 of the New York Judiciary Law reads as follows (emphasis ours):

“The court for the trial of impeachments has power to try impeachments, when presented by the assembly, of all civil officers of the state, except justices of the peace, justices of justices’ courts, police justices, and their clerks, for willful and corrupt misconduct in office.”

During both of Trump’s impeachments, many Republicans argued that any malfeasance by the president did not rise to the level required by federal law. By contrast, New York’s utter lack of criteria creates far more ambiguity, certain to be politically exploited by both supporters and opponents.

True, the Empire State impeached one of its 56 governors, but that was Governor William Sulzer back in 1913. Sulzer, who had served as a U.S. Congressman for years prior to becoming governor, was elected with the support of Tammany Hall. Not long into his term, Sulzer broke with Tammany, and his impeachment for misuse of campaign funds followed shortly thereafter. Sulzer retained popularity after his impeachment, and was elected to the New York State legislature just months later.

Although Sulzer was removed from office following his impeachment, his legacy isn’t one of a corrupt official with whom the law finally caught up. Rather, scholars generally hold up the Sulzer impeachment as one more casualty of the Tammany Hall political machine. Bottom line: the one impeachment that has actually happened in New York isn’t likely to serve as much of a precedent for Andrew Cuomo’s fate.

Impeachment alone would strip Cuomo of power. He’d get it back only if and when acquitted at trial. https://t.co/ksEvPTvaJg

Impeachment under New York law parallels federal impeachment in that impeachment is the bringing of charges (as compared with the finding of guilt, which occurs only after a trial). What’s different, though, is that a New York governor immediately loses the authority of their office at the point of impeachment. This means Lieutenant Governor Kathy Hochul would automatically become acting Governor during Cuomo’s impeachment trial, if there is one. If Cuomo were to be acquitted, he would regain the governorship for the remainder of his term. If convicted, he would be automatically removed.

In this regard, the procedural rules in New York mean that impeachment carries very high stakes. Removing Cuomo from office, even temporarily, is not a consequence legislators will take lightly. Doing so during an unprecedented global pandemic for which New York is (or at least was) at the epicenter ratchets things up another notch.

4. There’s always the chance Cuomo could be criminally prosecuted.

Cuomo is already the subject of a federal investigation for his handling of COVID-19 data in nursing homes. New York State Attorney General Letitia James is conducting a separate investigation into multiple sexual harassment allegations against the governor. [Sexual harassment is not a crime, but rather a civil offense. However, there are numerous criminal sexual offenses under New York law (see: latest allegation), many of which would depend on similar evidence.]

Although sitting presidents are immune from criminal prosecution, the same is not true for sitting state governors. Certainly, if any of the allegations against Cuomo result in criminal charges, that prosecution would likely take precedence over an impeachment in order to preserve Cuomo’s due process rights.

This prosecution-versus-impeachment joust is exactly what’s going on with South Dakota’s Republican Attorney General Jason Ravnsborg. Ravnsborg is charged with multiple misdemeanors for his role in the death of Joseph Boever. Ravnsborg had been driving on U.S. Highway 14 in Sept. 2020 when he hit and killed 55-year-old Boever; Ravnsborg told police he believed he had run into a deer until returning the next day and finding Boever’s body in a roadside ditch.

The South Dakota House of Representatives initiated impeachment proceedings against Ravnsborg, but then voted to halt those proceedings until the criminal charges are resolved.

If either the nursing home or NYAG-appointed investigations of Cuomo results in criminal charges, any impeachment in New York would likely take a similar back seat to a prosecution.

5. If impeachment does proceed against Cuomo, how would it work?

Currently, the New York Assembly has 150 seats, 106 of which are controlled by Democrats. There are 43 Republicans and one independent. Although there is reason to believe some Democrats would support a Cuomo impeachment, votes from 35 members of the governor’s own party is a tall order (but not necessarily an insurmountable one).

If the Assembly did pass the impeachment resolution, the next step would be a trial in the state Senate. The entire 63-member Senate would preside over the trial, with the exception of Majority Leader Andrea Stewart-Cousins (D), and Lt. Gov. Kathy Hochul, as both are in the line of succession for the governorship.

In addition, all seven judges of New York’s highest court (the Court of Appeals) preside over the trial. All seven judges were nominated by Cuomo during his time as governor.

A conviction requires a two-thirds supermajority after trial. Democrats control the New York Senate with a 43-20 majority over Republicans. If convicted, Cuomo would be removed from office and barred from ever holding public office in New York. He could, however, hold office in another state or in the federal government.

An impeachment of Andrew Cuomo would likely create multiple procedural battles (for which the governor would retain his own private counsel) before it even begins to address nursing homes or sexual harassment. Even in the unlikely event the matter proceeds to a full trial and vote, the chances of enough Democrats voting to convict appear slim.

As for Cuomo? He’s said quite clearly, “There is no way I resign.”