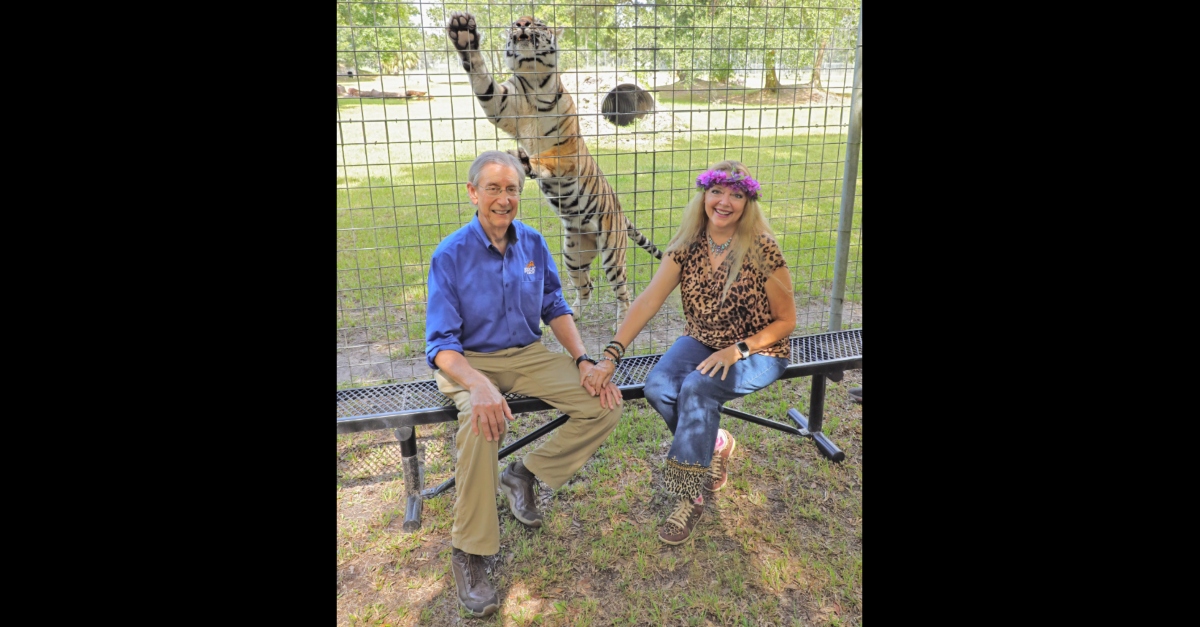 A lawsuit filed by the children of Carole Baskin’s former husband has been updated with numerous allegations weeks after Baskin moved to dismiss the case, in part, because it was so vague.

Jack “Don” Lewis, Carole’s former husband, went missing in 1997, and was officially presumed dead by a court in 2002. Lewis’s daughters Donna L. Pettis, Lynda L. Sanchez, and Gale L. Rathbone—along with his former assistant Anne McQueen—filed an Amended Complaint on Tuesday in their August lawsuit, seeking to obtain more information about Lewis’s life and death. Baskin, who was a subject of the Netflix show Tiger King, has repeatedly denied having anything to do with Lewis’s disappearance.

In her earlier motion to dismiss the case, Baskin called out the plaintiffs for having “vaguely allude[d] to some form of unidentified ‘wrongdoing’ by Baskin and others.”  Now, it appears, the plaintiffs and their attorney John Phillips were happy to oblige by adding some juicy specifics—74 pages worth, if you count the exhibits.

We’ve reviewed that newly-amended complaint, and it’s a lot. Here are 10 of the most outrageous allegations (emphasis on allegations) against Baskin.

1. She said Don Lewis was the target of witchcraft.

According to the amended complaint, Baskin has claimed that witches or demons were attempting to take Don Lewis’ soul through infidelity.

“Don would never consort with witches, if he knew up front what they were from the start but Don’s security is money and this demon has used his own insecurities to draw him to trust and believe [a woman with whom Lewis allegedly had an extramarital affair] who makes money for him,” Baskin allegedly said.

2.  She wanted to divorce Lewis for being “evil.”

Plaintiffs alleged that Baskin accused Lewis of threatening to poison all the cats with antifreeze; in retaliation, she conditioned granting him a divorce on his undergoing an Alzheimer’s test to prove that he was, “sane, and just evil.”

3.  She said cats peed on her phones.

According to details in the filing, on the night before Don Lewis disappeared, Baskin’s car broke down. She contacted local law enforcement to rescue her. When asked why she hadn’t call her husband instead, Baskin claimed that “cat urine destroyed their bedroom phones.”

4.  She told everyone that Lewis had been trying to kill her.

Plaintiffs pointed to a video diary entry in which Baskin said that Lewis tried to kill her and her family by screwing the windows of mobile homes shut, and trying to hit her by swinging a tree from a crane.

5.  She broke into an office and stole important documents.

The amended complaint alleged that Baskin started taking action to take over Lewis’s assets the moment Lewis left for his alleged trip to Costa Rica. Among other things, Baskin is said to have broken into Lewis’s office and physically removed the contents of several file cabinets along with some personal property.

6. She already admitted that she’d been lying about Anne McQueen.

The recent filing laid out some of the backstory between Carole Baskin and Anne McQueen — Lewis’s former assistant.  Back in 1998, Baskin publicly apologized to McQueen as the two settled a defamation case McQueen had filed against Baskin. Baskin had publicly accused McQueen of fraud, theft, and involvement in the death of Don Lewis; when they settled the case for $50,000, Baskin made a full and formal apology in front of a notary.

7.  She forced people to cover up her forgeries.

According to the plaintiffs, Baskin used a fraudulent power of attorney to accomplish some of her misdeeds. For example, the name of Susan Bradshaw, one of the purported witnesses to Lewis’s will – was forged. Bradshaw now says she went along with Baskin’s story because, “Carole had me backed against a wall at the time and from fear of her then I signed a statement swearing it to be my signature even though it wasn’t. Bradshaw continues to claim that Baskin “forges signatures all the time,” that she’s “been threatened.”

8. She dared people to check under her septic tank for Lewis’s body.

In response to some theories that Lewis’s body is buried under a septic tank, Baskin allegedly advanced a rather messy timeline. Despite statements to the contrary, “evidence revealed the septic tank was installed around the time Don Lewis disappeared after Carole Baskin categorically stated it was not.” Baskin and her current husband also offered “potentially illegal gambling” by challenging anyone who is sure Lewis’ body would be found beneath the septic tank to put up $100,000.

“If Don’s not there we get their $100k,” said Baskin.” If Don is there, they get our money. It would be money well spent, if by some miracle someone managed to kill and bury him there, just to have closure.”

9. She’s got a meat grinder big enough to use on her husband’s body.

There has been public speculation that Don Lewis’s body was put through a meat grinder. Baskin herself addressed these claims with media, denying even owning anything larger than a very small meat grinder. According to the new filing, though, Big Cat Rescue has a meat grinder “far bigger than the one Baskin admitted to owning.”

10. Her behavior on Dancing with the Stars is making everything worse.

Per the amended complaint, during her appearances on Dancing with the Stars, Baskin has repeatedly been “complicit with jokes about Don Lewis’ death.”

For example, Baskin said nothing when show judge Derek Hough mimicked a viral Baskin-inspired Tik Tok, singing, “Carole Baskin, ya danced that with Pasha, you smacked it.” The original version had said “Carole Baskin killed her husband, whacked him. Can’t convince me that it didn’t happen. Fed him to Tigers, they snackin’.” She was similarly silent when Bruno Tonioli said, “you didn’t quite kill the paso doble, it was kind of sedated,” and, “went along with the joke on Good Morning America,” that she’d “really kill it next week.”