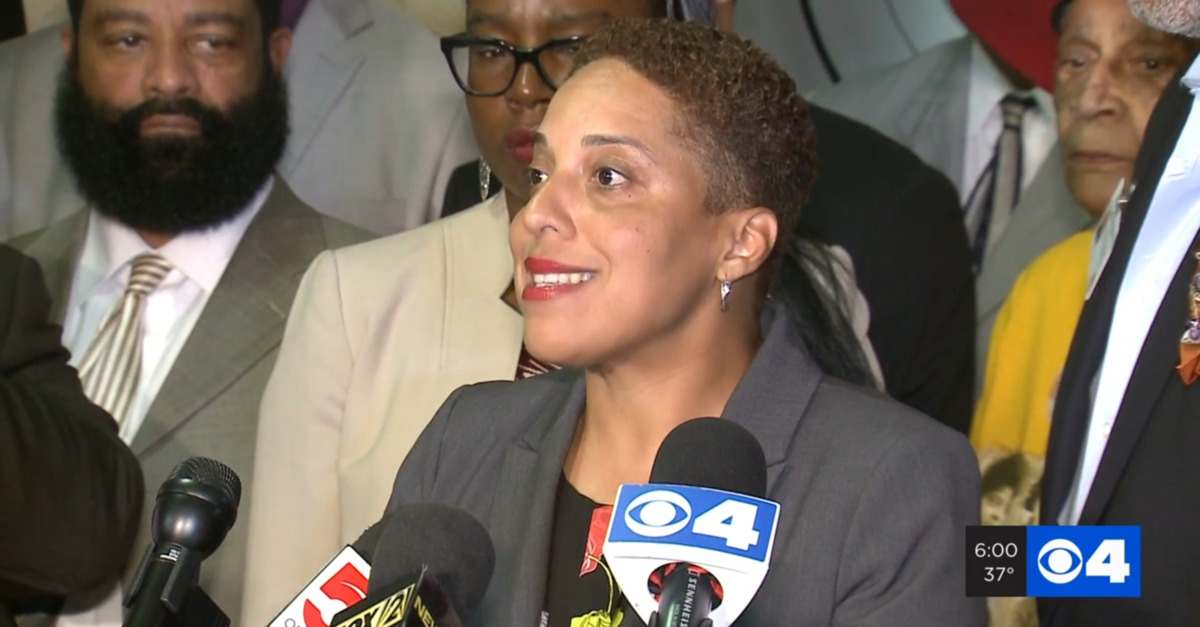 St. Louis Circuit Attorney Kim Gardner plans to file a federal civil rights lawsuit against the city she serves, as well as a powerful police union there, alleging a campaign of racism and a conspiracy intended to frustrate progressive reforms.

“As a reformer and black woman, I represent a clear threat to the police union and political establishment that are determined to preserve the status quo in St. Louis — a status quo that benefits the few in power at the expense of the many,“ Gardner said in a statement obtained by ABC News. “This lawsuit is a signal that the voice and will of the people of St. Louis, who have fought tirelessly to change a broken criminal justice system, will not be stifled.”

According to local CBS affiliate KMOV, the lawsuit takes aim at the “entrenched interests” of the City of St. Louis and alleges violations of the Ku Klux Klan Act of 1871 in addition to more standard civil rights violations.

The lawsuit names the city of St. Louis, the St. Louis Police Officers Association [(SLPOA)], its business manager, Jeff Roorda, and Gerard Carmody, a special prosecutor who indicted an investigator hired by Gardner. It also names Carmody’s son and daughter, who helped in his investigation, and a former police officer who sued over Gardner’s use of private attorneys related to Carmody’s investigation.

The planned filing is believed to be the first of its kind targeting a police union. Such unions are traditionally reactionary and conservative political entities which often oppose criminal justice reform measures whether state, local or federal in nature.

The lawsuit reportedly calls out the SLPOA as a corrupt and racist organization which strives to protect dirty and racially-bigoted officers.

According to the filing, the SLPOA “has gone out of its way to support white officers accused of perpetrating acts of violence and excessive force against African American citizens.”

Individual cops expressing racist attitudes and anti-black sentiment in particular are also highlighted in the lawsuit, including an in incident in which an officer “posted a photograph on Facebook of an African American police officer standing with two African American demonstrators, calling the officer ‘Captain ‘Hug a Thug’ and a disgrace to the uniform.'”

One Facebook post by a Missouri police officer appeared to joke favorably about the death of African-Americans as some sort of zero-sum game between black people and police.

According to Gardner’s suit, the officer in question “offered to sell a t-shirt emblazoned with the words, ‘Black Lives Splatter, because Blue lives matter.'”

I’m not sure what the hell is going on in our country these days. I just drove by an authentic Mexican restaurant in town; and there were white guys putting on a new roof, cutting the grass and doing landscaping.

Gardner was instrumental in the 2018 resignation of then-GOP governor Eric Greitens. As Law&Crime previously reported, her office was the first to look into allegations that Greitens took a sexually compromising photo of a woman during a bondage session and then threatened to share that photo publicly if she ever exposed their kink-filled trysts.

Gardner publicized her lawsuit as a strike across the bow of a corrupt criminal justice establishment that allegedly lives in fear of the wrath and retribution meted out by organized cops. In an interview with the Associated Press, she said:

This is about the will of the people being silenced by a concerted effort to stop reform in the city of St. Louis, and this has to be addressed. This is saying, “No more are we going to let the powerful few who want to hold onto the status quo prevent an elected prosecutor from doing her job.”