Jeffrey Epstein Victim Virginia Giuffre Says She ‘May Have Made a Mistake,’ Dismisses Lawsuit Against Alan Dershowitz ‘Without Costs’ 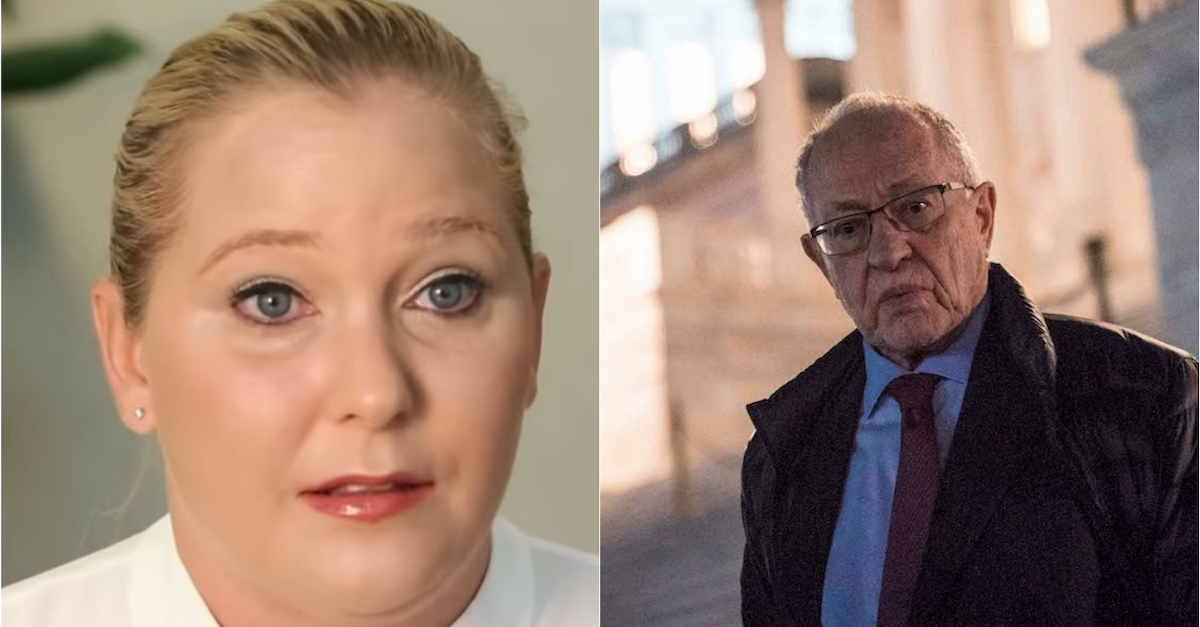 Jeffrey Epstein survivor Virginia Giuffre said that she “may” have made a mistake when she claimed she was instructed to have sex with Harvard Law professor emeritus Alan Dershowitz, as the parties agreed to permanently dismiss their lawsuits against each other on Tuesday.

“I have long believed that I was trafficked by Jeffrey Epstein to Alan Dershowitz,” Giuffre wrote in a statement, accompanying the dismissal. “However, I was very young at the time, it was a very stressful and traumatic environment, and Mr. Dershowitz has from the beginning consistently denied these allegations. I now recognize I may have made a mistake in identifying Mr. Dershowitz. This litigation has been very stressful and burdensome for me and my family, and we believe it is time to bring it to an end and move on with our lives.”

The stipulation of dismissal agrees to put an end to four separate lawsuits — Giuffre’s defamation claims, Dershowitz’s countersuit, and the retired professor’s wrangling with Giuffre’s lawyer David Boies — “without costs or award of fees to either party.”

“As I have said from the beginning, I never had sex with Ms. Giuffre,” Dersowitz wrote. “I have nevertheless come to believe that at the time she accused me she believed what she said. Ms. Giuffre is to be commended for her courage in now stating publicly that she may have been mistaken about me. She has suffered much at the hands of Jeffrey Epstein, and I commend her work combating the evil of sex trafficking.”

The surprising development was revealed in the form of a one-paragraph filing stating that Giuffre and Dershowitz “hereby stipulate that said action be dismissed with prejudice and without costs or award of fees to either party.”

“All rights of appeal are hereby waived,” the stipulation of dismissal concluded.

The dismissal spells an abrupt end to litigation trickling through federal court since 2019. After Giuffre claimed that she was instructed to have sex with Dershowitz, he called her a “certified, complete, total liar.” That remark led Giuffre to file defamation claims, and Dershowitz responded in kind for Giuffre’s accusations of sexual misconduct.

Dershowitz, who was formerly Epstein’s lawyer, repeatedly denied Giuffre’s claims over the years, including on the Law&Crime Network.

In addition to Giuffre v. Dershowitz, the statements also allude to the litigation between the retired professor and Boies, in a high-profile rivalry between two powerful attorneys that captivated the legal community. Dershowitz walked back some of his heated allegations against Giuffre’s lawyer.

“I also now believe that my allegations that David Boies engaged in an extortion plot and in suborning perjury were mistaken,” Dershowitz wrote.

“I agree with Mr. Dershowitz and Ms. Giuffre that the time has come to end this litigation and move on,” he wrote. “I know that Alan Dershowitz has suffered greatly from the allegation of sexual abuse made against him – an allegation that he has consistently, and vehemently, denied. I also know that this litigation has imposed, and continues to impose, a significant burden on Ms. Giuffre.”

All of the parties agree that the resolution “does not involve the payment of any money by anyone or anything else.”

Much has changed in the Epstein saga since Giuffre first filed her case. Prosecutors from the Southern District of New York charged Epstein and his now-convicted accomplice Ghislaine Maxwell with sex trafficking. Epstein was found dead in his jail cell before trial, but Maxwell faced a jury that found her guilty of crimes that led to her 20-year sentence. Giuffre wrote a victim impact letter urging a harsh sentence.

As recently as July, Giuffre indicated she intended to testify against Dershowitz at trial.

Before the dismissal of the Dershowitz litigation, Giuffre filed and settled a separate lawsuit against the U.K.’s Prince Andrew — one that ended with a confidential settlement.