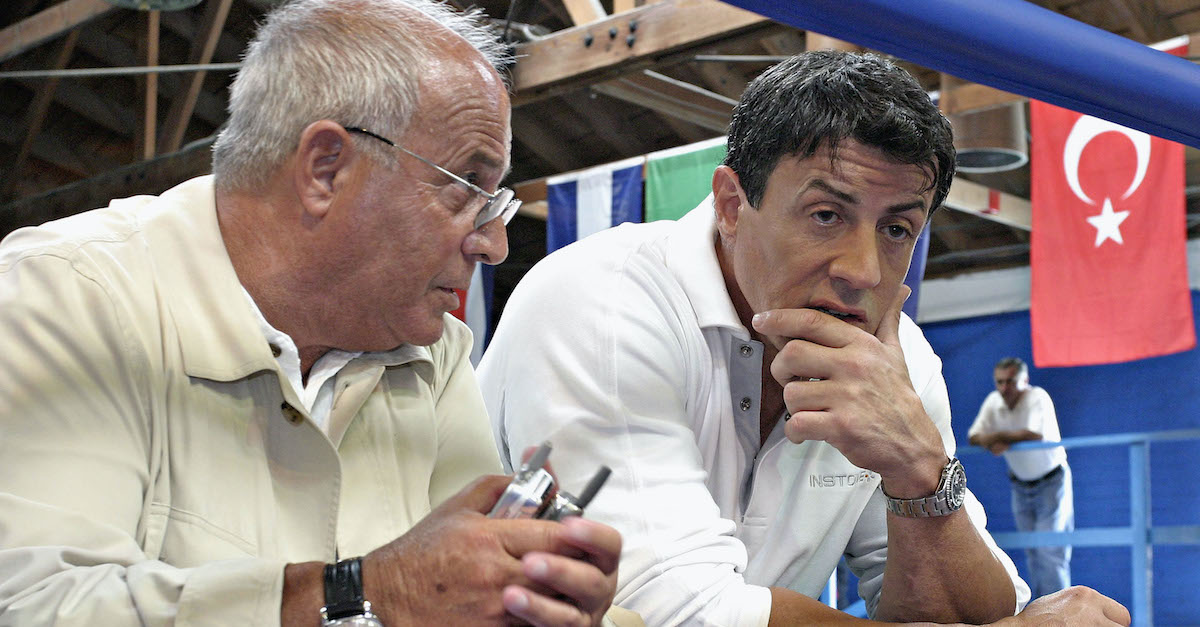 Actor Sylvester Stallone (R) and Jeff Wald (L), producer of “The Contender” attend the Casting Call For The Unscripted Drama “The Contender” on May 25, 2004 at La Brea Boxing in Los Angeles, California.

A Hollywood producer who has managed numerous stars is suing the backers of his latest venture, American Cherry, for failing to pay him to produce it. Jeff Wald, 76, claimed that NYLA Media Group (a.k.a., NYLA Productions), its founder Louis Arriola, Arriola’s daughter Taryn Arriola, and NYLA CEO Cameron Mitchell conspired to commit fraud against him and breached a contractual agreement.

The lawsuit, filed in the Superior Court of the State of California by attorney Barry Morris on Wednesday, began by chronicling Wald’s production resume and associations with various stars over the last five decades:

Plaintiff JEFF WALD is 76 years old and has been in the entertainment business for over 50 years. As a producer, plaintiff has produced 2300 hours of documentaries, television shows, miniseries, and movies, including 2 Days in the Valley. As a personal manager, plaintiff WALD has nurtured the careers of Sylvester Stallone, Miles Davis, Oscar Brown Jr., Roseanne Barr, Mike Tyson, Donna Summer, Crosby Stills and Nash, Helen Reddy, the Turtles, Deep Purple, Chicago, James Brolin, Tiny Tim and others too numerous to mention. He was appointed to the 1984 Olympic Committee by Mayor Bradley, he was a delegate for Jerry Brown to the 1976 Democratic National Convention and for Ted Kennedy in 1980, he has been on the Board of Directors of Cedar-Sinai and the Betty Ford Clinic, and he was named Humanitarian of the Year by the City of Hope.

Wald claimed that Louis Arriola “represented himself as being an honest and successful businessman, someone who could be trusted, someone who would live up to oral agreements.” Wald alleged that he later learned this was no so. He said he “never” would have done business with Arriola if he had known that the defendant was convicted of felony mail fraud in 2009.

Instead, according the lawsuit, Wald obtained a script in 2017 for a project then-named Fishbowl. He claimed an agreement was reached with the defendants in 2019 to turn the script into a film called American Cherry.

IMDB currently says the movie is in the post-production stage. “Set in middle America, a small town, low-income suburbia,” the description of the movie reads.

The plaintiff claimed that he fulfilled his own contractual obligations related to producing the film, but only ever received $25,000 of the $100,000 that the defendants agreed to pay. Wald cited a Memorandum of Understanding, which was included in the suit as an exhibit.

Wald then cited an anecdote involving actress Marissa Tomei to support the notion that Arriola “had champagne tastes which he attempted to satiate with a self-imposed beer budget.” The plaintiff claimed he successfully recruited Tomei to be in the movie at a significantly cheaper rate than she normally charges, but said those efforts were ultimately to no avail:

As an example of the former, plaintiff JEFF WALD recruited Marissa Tomei, who agreed to be in the film for $300,000 instead of her usual
$1,000,000 plus fee; she was rejected by defendants ARRIOLA as being too expensive. Rather than raise his budget or lower his “standards.” Defendant LOUIS ARRIOLA decided to “shoot” the bearer of bad tidings and refused to pay plaintiff JEFF WALD the rest of his contractual fee.

Wald said he spent several weeks of time on set to keep up his end of the bargain. He claimed the defendants, even after being confronted about lack of payment, have not compensated him for his services:

Defendant LOUIS ARRIOLA’s false promise that he would plaintiff JEFF WALD for his services as a producer and subsequent refusal to
honor that contractual promise constituted an “unfair practice” within the meaning of that term as used by Civil Code §3345 in that it “caused one or more senior citizens…to suffer loss…of income.”

The plaintiff is suing for damages in the amount he says he is owed plus any other damages the court may award. He also wants the costs of the lawsuit covered.

Law&Crime reached out to the defendants for comment. Andrew Brettler and Paul Sorrell, attorneys for the defendants, said in a statement that their clients “dispute and deny that any monies are owed to Mr. Wald.”

The attorneys noted that a counterclaim had been filed against Wald “asserting causes of actions against him for fraudulent inducement and breach of contract.”

“NYLA seeks recovery of all monies it previously paid to Mr. Wald, plus punitive damages, as a result of his tortious conduct,” the lawyer continued.

The cross-claim alleged that Wald is the one who acted fraudulently to “capitalize” on “non-binding discussions” about his “potential involvement with a film in order to extract unwarranted and unjustified payments”:

Wald has already fraudulently obtained $25,000 from NYLA, and now seeks additional unjustified compensation despite the fact that he expressly committed to provide his services for a flat fee of $25,000. The simple fact is that Wald never intended to comply with any of his promises to NYLA concerning the film. In addition to fraudulently obtaining NYLA’s agreement to his involvement — which he uses to claim additional sums that no one agreed to pay — Wald harassed employees, vendors and others associated with the film and thereby undermined and impeded production. Furthermore, Wald failed to perform the basic tasks he was hired to perform, such that he failed to provide material consideration to support any agreement pursuant to which he claims payment. Wald’s tortious conduct and breaches of contract are unconscionable and expose him to substantial compensatory and punitive damages.

The attorneys argued in response to Wald’s allegations that the Memorandum of Understanding was “never meant to be legally binding” and that Wald knew it.

“The proposed terms set forth in the MOU were subsequently changed in material respects, based on further discussions between the parties and a substantial modification of the proposed budget. Wald was well aware that the MOU was not intended to be legally binding on NYLA or anyone else,” the filing said.

What’s more, the cross-claim alleged, Wald was sent a “revised proposal” saying that he would be paid “a flat fee of $25,000 for his services (in addition to potential contingent compensation based upon occurrence of certain events that never materialized).”

The contingency? Attracting “Tier 1” talent for the film. Recall: Wald claims he recruited such talent (e.g., Marissa Tomei) but said Arriola et al. didn’t want to pay. The cross-claim said that, to the contrary, Wald failed to “attract and retain ‘Tier 1’ talent to act in the Picture.

“Indeed, the only ‘actor’ he brought to the Picture was his unexperienced daughter; he secured no ‘Tier 1’ talent as agreed. Wald’s conduct caused significant delays in the production and became a major impediment to morale,” the filing said, also accusing Wald of Wald falling asleep on set during production.

Wald is now himself being sued for breach of contract, in addition to fraudulent inducement of contract.

Read the complaint and the counterclaim below:

cross-claim against Jeff Wald by Law&Crime on Scribd