‘He Sent the Gestapo’: Armed Officers Raid Home of Florida Data Scientist Who Said She Was Fired for Refusing to Manipulate COVID-19 Data 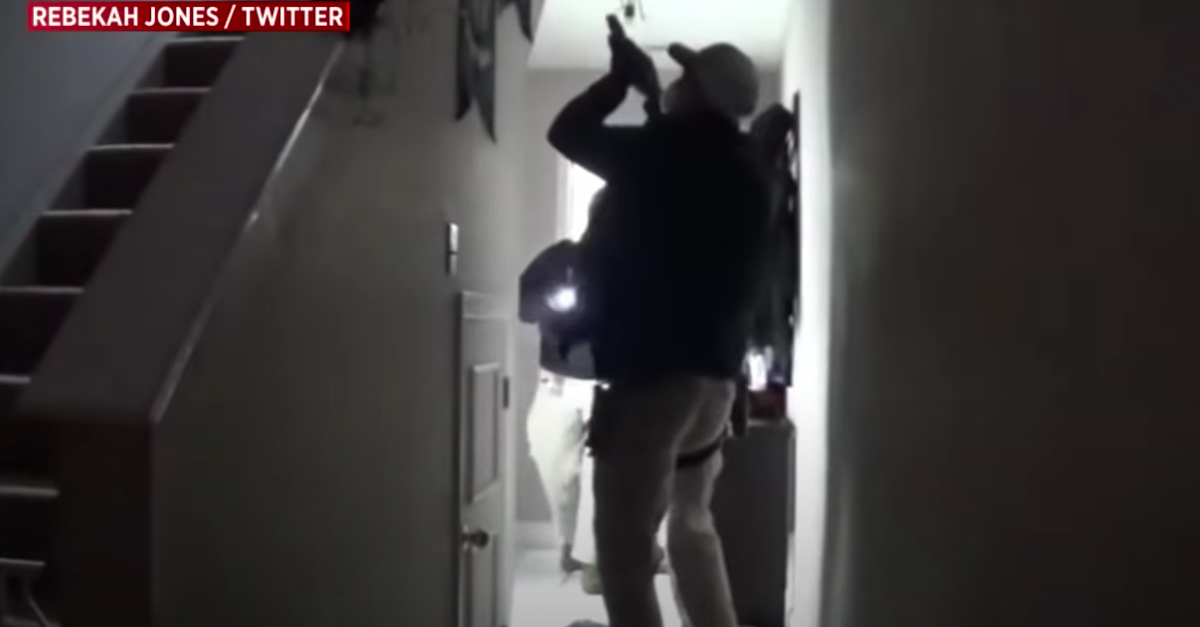 The Florida Department of Law Enforcement (FDLE) in Tallahassee on Monday raided the home of Rebekah Jones, a former state data scientist who had accused state officials of attempting to manipulate coronavirus statistics before she was fired by Gov. Ron DeSantis in May.

Jones’s security camera footage from 8:30 a.m. shows approximately 10 FDLE agents entering her house through the front door with guns brandished as they escorted Jones out of the house and asked who else was in the home. She told the officers that her husband and two children were inside. The officers then repeatedly shout “search warrant” and order the other occupants to come out of the house. You can hear Jones yell several times that the officers pointed their guns at her two-year-old daughter and eleven-year-old son.

1/
There will be no update today.

At 8:30 am this morning, state police came into my house and took all my hardware and tech.

They were serving a warrant on my computer after DOH filed a complaint.

The officers were serving a warrant for Jones’s electronic equipment obtained after the Department of Health (DOH) filed a complaint related to an unauthorized user accessing DOH’s messaging system last month. A message sent through the system urged employees to “speak up before another 17,000 people are dead.”

“They took my phone and the computer I use every day to post the case numbers in Florida, and school cases for the entire country. They took evidence of corruption at the state level. They claimed it was about a security breach. This was DeSantis. He sent the gestapo,” Jones tweeted following the raid.

They took my phone and the computer I use every day to post the case numbers in Florida, and school cases for the entire country.

They took evidence of corruption at the state level.

They claimed it was about a security breach.

He sent the gestapo.

Earlier this year, Jones was serving as the department’s data manager when she claimed that the Deputy Secretary for Health instructed her to “manipulate” the coronavirus case data the state was using to justify lifting its stay-at-home orders early, the Tampa Bay Times reported in May.

“Shamarial Roberson, Deputy Secretary [for] Health, asked me to manipulate the data to mislead the public to support reopening mostly rural counties after the preliminary plan was already drafted and about to be presented,” Jones said in the statement to the newspaper.

Jones added that she refused to comply with the order. “Otherwise, I’d still have my job,” she said.

Despite her ouster from state government, Jones continued to be a thorn in the side of the DeSantis administration, setting up her own website and Twitter account that independently published coronavirus statistics and issued warnings which she says are more accurate than the data released by the state.

In a statement, FDLE said they knocked on Jones’s door and called her but she “refused to come to the door for 20 minutes and hung-up on agents.”

Appearing on CNN Monday evening, Jones said based on what FDLE took from her home, she doesn’t think she is the target of the state’s investigation, but critical information about a whistleblower who’s provided her information from inside the government is contained on her confiscated phone.

“On my phone is every communication I’ve ever had with someone who works at the state, who has come to me in confidence and told me things that could get them fired or in trouble like this,” Jones said. She then warned her sources that “if he doesn’t already know, DeSantis will soon know that you’ve been talking to me.”

Gov. "DeSantis needs to worry less about what I'm writing about and more about the people who are sick and dying… doing this to me will not stop me from reporting the data. Ever."
– FL data scientist Rebekah Jones on having her home raided as part of a cybercrime investigation. pic.twitter.com/ztbqdKjwYv