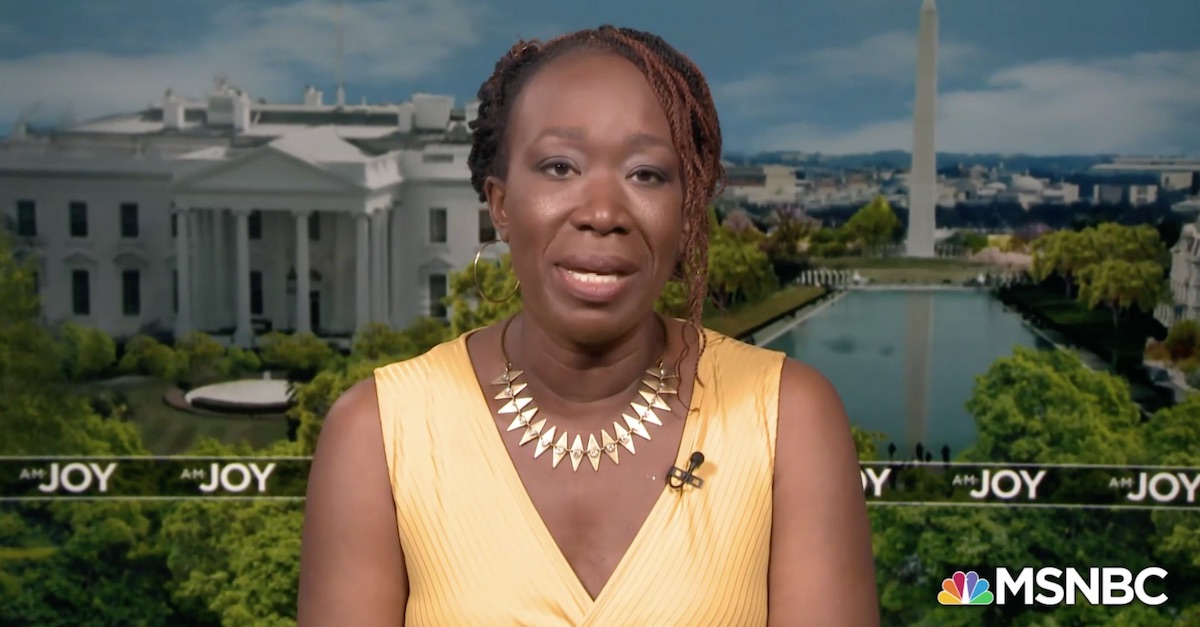 Days after we learned Joy Reid was taking the nightly time slot formerly occupied by Chris Matthews on MSNBC, a federal appellate court has revived a defamation case against the ascendant cable news anchor.

The dispute stems from a 2018 city council meeting, a photograph, and the ensuing reaction to that photograph on social media—a photo Reid played a role in propelling to viral status.

The U.S. Court of Appeals for the Second Circuit on Wednesday vacated a lower court’s dismissal of Roslyn La Liberte’s defamation claim against Reid, finding that the dismissal was erroneous:

United States District Court for the Eastern District of New York (Irizarry, Ch. J.), which both dismissed her defamation claim against Joy Reid under Rule 12(b)(6) and “struck” the claim under California’s Anti-Strategic Lawsuits Against Public Participation (anti-SLAPP) statute. We VACATE that judgment and REMAND the case for further proceedings consistent with this opinion.

We hold (for the first time) that California’s anti-SLAPP statute is inapplicable in federal court because it conflicts with Federal Rules of Civil Procedure 12 and 56. We also vacate the dismissal of the defamation claim under Rule 12(b)(6). As to one of the statements at issue, the court erroneously deemed La Liberte to be a limited purpose public figure (and accordingly dismissed for failure to plead actual malice); as to the other, the court mischaracterized it as nonactionable opinion. We affirm the district court’s conclusion that Reid does not qualify for immunity under section 230 of the Communications Decency Act.

At some point during the Council Meeting, La Liberte was photographed interacting with a fourteen-year-old teenager who appears to be (and is) Hispanic (the “Photograph”). (See App. at 265.) The Photograph showed La Liberte with her mouth open and her hand at her throat in a gagging gesture.

(App. at 67.) The Photograph went viral. The next day, Joy Reid, a personality on the MSNBC cable station, retweeted (i.e., shared) the Vargas tweet to her approximately 1.24 million followers. (La Liberte is not alleging defamation by Reid as to that communication.)

Later that same day (June 29), Reid posted the Photograph on her Instagram with the following caption:

He showed up to a rally to defend immigrants . . . . She showed up too, in her MAGA hat, and screamed, “You are going to be the first deported” . . . “dirty Mexican!” He is 14 years old. She is an adult. Make the picture black and white and it could be the 1950s and the desegregation of a school. Hate is real, y’all. It hasn’t even really gone away.

But, the court noted, the teenager, when interviewed later about this, said La Liberte didn’t use racial slurs and called their discussion  “civil.”

Two days later (July 1), Reid published another post about La Liberte, this time on Instagram and Facebook. This post juxtaposed the Photograph of La Liberte with the 1957 photograph showing one of the Little Rock Nine walking past a screaming white woman. Reid added the following caption:

It was inevitable that this [juxtaposition] would be made. It’s also easy to look at old black and white photos and think: I can’t believe that person screaming at a child, with their face twisted in rage, is real. By [sic] every one of them were. History sometimes repeats. And it is full of rage. Hat tip to @joseiswriting. #regram #history #chooselove (the “July 1 Post”) (App. at 87.)

La Liberte hired a lawyer, who contacted Reid on July 2 to demand that she take down the posts and apologize. Reid responded that evening by removing them from her accounts and issuing the following statement: “It appears I got this wrong. My apologies to Mrs. La Liberte and [the teenager].” (App. at 116.)

The July 1 post referenced above will continue to be relevant moving forward. Per the court:

Readers who were unfamiliar with the June 29 Post could still interpret the July 1 Post to mean that Liberte engaged in racist conduct. The Little Rock encounter is a “matter[] of common knowledge rationally attributable to all reasonable persons.” Bartholomew, 17 Cal. App. 5th at 1226-27. Far from an obscure episode, it is a landmark event in one of the most vital historic developments of twentieth-century America, and the 1957 photograph is an indelible image of it. Presumably, that is why and how Reid used it.

Moreover, even those with an impoverished frame of reference could interpret the post as accusing La Liberte of engaging in racist conduct. There was no need for “extrinsic aid beyond [a reader’s] own intelligence and common sense.” Id. at 1226. The 1957 photograph shows a white woman “screaming at a [Black] child, with [her] face twisted in rage.” (App. at 87.) When viewing that image next to La Liberte’s Photograph and reading Reid’s comment that “[h]istory sometimes repeats,” a reader could believe that La Liberte had likewise engaged in racist conduct. And Reid “is liable for what is insinuated, as well as for what is stated explicitly.” Bartholomew, 17 Cal. App. 5th at 1227. Because that accusation is capable of being proven or disproven, the district court erred by characterizing the July 1 Post as nonactionable opinion.

“[La Liberte’s] claim as to this post should proceed to discovery,” the circuit court ruled.