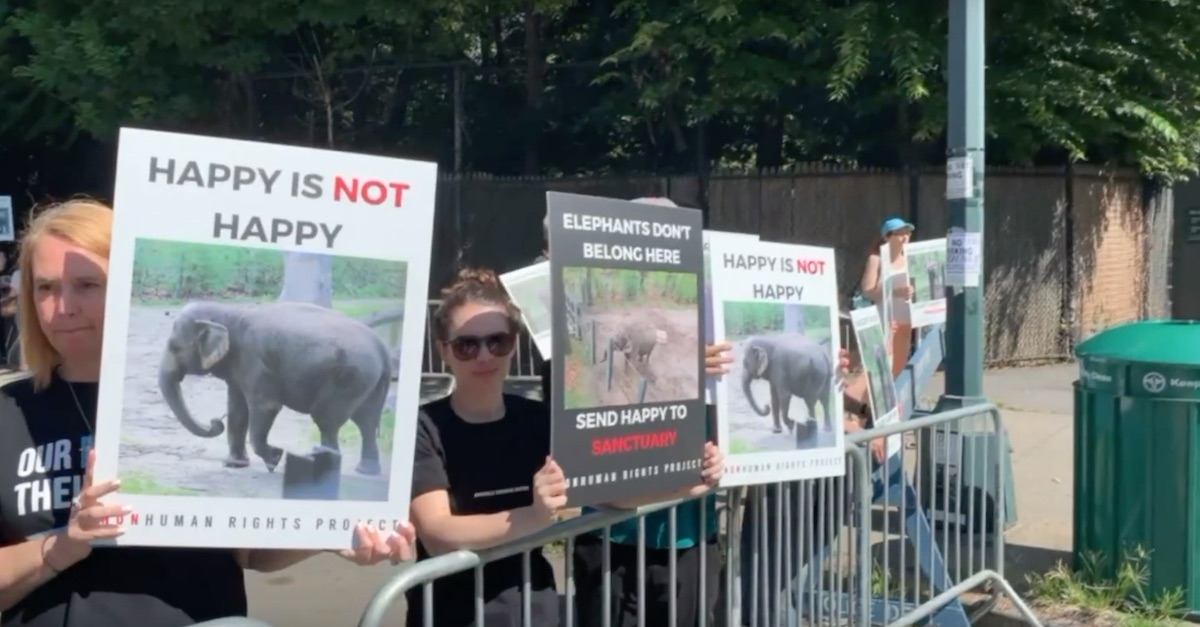 An animal rights organization that sued the Bronx Zoo in the hopes a judge would declare an elephant named Happy a person is probably unhappy right now. The Bronx County Supreme Court dismissed Nonhuman Rights Project’s (NhRP) lawsuit on Wednesday, meaning the elephant will remain at the zoo.

As you can see in the image above and the video below, activists firmly believe that Happy, an Asian elephant, is unhappy, “unlawfully imprisoned” and ought to be set free.

The central purpose of habeas corpus is to release autonomous beings from illegal imprisonment. As an autonomous self-determining nonhuman, Happy is entitled to immediate release from unlawful imprisonment. In accordance with its duty to reexamine the common law in light of scientific discovery, evolving standards of morality, public opinion, and experience, this Court should recognize that Happy is a “person” with the common law right to bodily liberty protected by the common law of habeas corpus as a matter of liberty, equality or both, and order her immediate release. As Happy should not be released to the wild or onto the streets of New York, this Court should order that she be sent to a sanctuary that will provide her with the ability to exercise her autonomy to the fullest extent possible, which the NhRP suggests is the Performing Animal Welfare Society in California. In keeping with the language and spirit of Judge Fahey’s concurrence: “The issue whether a nonhuman animal has a fundamental right fundamental to liberty protected by the writ of habeas corpus is profound and far-reaching. It speaks to our relationship with all the life all around us. Ultimately, we will not be able to ignore it.”

The petition wasn’t ignored, but it was dismissed.

Director of the Bronx Zoo and EVP of Zoos & Aquarium at the Wildlife Conservation Society Jim Breheny celebrated the court’s decision, calling the legal action “ill-conceived.”

“The court rejected NhRP’s ill-conceived attempt to have an elephant at the Bronx Zoo, Happy, declared a ‘person,’ entitled to protection under the writ of habeas corpus. In doing so, the court supported the Bronx Zoo’s legal position and we believe this decision is in Happy’s best interests,” Breheny said before noting that NhRP keeps attempting to have animals declared as persons. “This marks the 24th judge in New York to rule against NhRP as it attempts to advance its agenda to extend human protections to animals. In this case, NhRP tried to use the common law writ of habeas corpus, an important legal protection for unlawfully imprisoned human beings. NhRP’s continued failed attempts to grant habeas corpus to animals demeans all the people who have sought such relief.”

“This is the fifth case NhRP has lost seeking legal personhood for animals,” the statement continued. “All four Departments of the New York State Supreme Court, Appellate Division have ruled against NhRP. Their repeated use of the legal system is wasteful and self-serving.”

Breheny also denied allegations that the elephant has been neglected or isolated.

“From the beginning, the information perpetuated by NhRP about Happy has been inaccurate, misleading or simply false, and they knew it,” he concluded. “In fact, Happy is not kept in isolation – she has contact with another elephant; Happy is not languishing; Happy is not kept indoors for half the year; Happy is well cared for by professionals with decades of experience.”