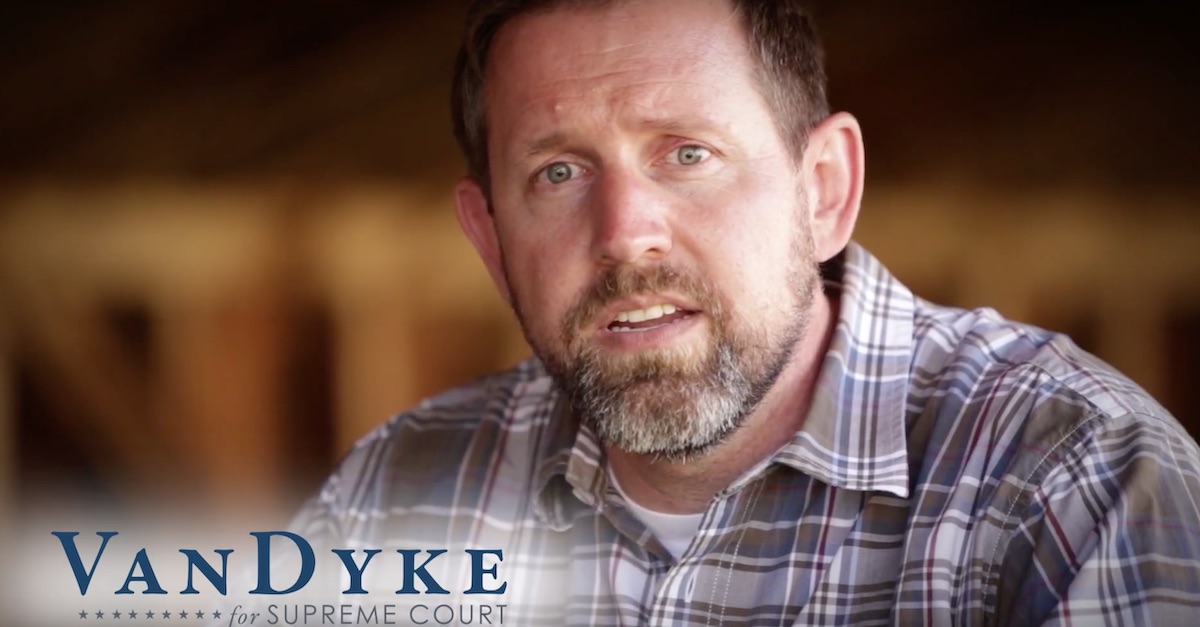 A federal judge appointed by President Donald Trump authored something just shy of a dissent in a federal immigration case while invoking the pop singer Meatloaf and one of his better-known songs.

“I suppose one might argue that two out of three ain’t bad,” U.S. Circuit Judge Lawrence VanDyke wrote. “But even Meatloaf would find fault with our [immigration precedent] rule.”

The case is stylized as Sanchez Rosales v. Barr and concerns two Mexican nationals who broached the idea of applying for green cards with “a non-attorney notario named Carlos Lewis.” After that, Lewis filed asylum applications without consulting his clients and they were both ordered to appear for an immigration hearing in 2014.

Lewis advised them not to attend that hearing and they were ordered to be deported. Effectively, the duo followed their advocate’s legal advice and suffered the consequences for that error.

A motion and appeal of the deportation proceedings were timely filed and each was subsequently rejected by the Board of Immigration Appeals (BIA). Lewis, the plaintiffs insist, helped craft each of those failed attempts–himself failing to note his initial advice to not attend the hearing that prompted the deportation order in the first place.

After obtaining proper legal counsel, Israel Sanchez Rosales and Maria Antonia Martinez Hernandez Sanchez were finally able to mention that Lewis advised them against attending the original hearing. But the BIA again rejected their motion–claiming the plaintiffs had been unable to show “that they were prejudiced by ineffective assistance or fraud” and that they also failed to show “their return to Mexico would result in exceptional and extremely unusual hardship for their . . . children.” Notably, the couple’s children are U.S. citizens and live in the United States.

The U.S. Court of Appeals for the Ninth Circuit ruled in the couple’s favor–finding that the BIA made a clear error of law.

Choe-Groves, a Barack Obama-appointed judge, actually sits on the U.S. Court of International Trade but was “sitting by designation” here.

While not a strictly a more typical dissent or concurrence, VanDyke signed off “dubitante” in order to doubt the holding in the case.

“The majority opinion correctly concludes that circuit precedent compels our result in this case,” he began, before citing the relevant precedent and admitting that it controls. “I write separately because that precedent is silly and well illustrates our court’s nasty habit of muddying immigration law and holding the BIA—an appellate body—to stilted standards to which we would never subject ourselves.”

VanDyke went on to note that the Ninth Circuit’s immigration jurisprudence on Fifth Amendment issues is somewhat all over the place because the precedents are based on an out-dated–repealed–law and a similar case that runs counter to the decision the court reached. He also cited another fairly recent Ninth Circuit decision on similar questions that reached the exact opposite decision.

Here’s a tidy summary of those cases:

To sum up, a dubious and incomplete picture of BIA precedents was ratcheted into a rule supposedly meant to replicate exactly what the BIA was doing. Now, we’re applying that rule to reverse the BIA for not doing the thing they apparently did so often we decided to do it, too. And we have to apply it even though this court in Singh-Bhathal rejected an ineffective assistance claim indistinguishable from the one in this case. As my colleague remarked about another anomalous rule in a different corner of our immigration law, the rule our panel is forced to apply in this case—like so many of our court’s immigration precedents— is “dumb, dumb, dumb.”

“This type of absurdity is regular fare in our immigration cases,” he opined. “Our circuit’s immigration jurisprudence is a hot mess. It’s sharply at odds with the text and purposes of immigration law.”

In an unforced fit of judicial realism, however, VanDyke spoke one of the tell-tale secrets about how U.S. judges actually interpret the law:

[O]ur jurisprudence betrays the nasty habit of acknowledging only those precedents that support the needs (and desired result) of the moment—that being to overturn the BIA.

VanDyke was nominated for the lifetime judgeship in September of 2019. A controversial series of reports ensued after the American Bar Association rated him “not qualified” and cited evidence that VanDyke might not be “fair to persons who are gay, lesbian, or otherwise part of the LGBTQ community.” Conservatives called that a “political drive-by shooting,” and VanDyke tearfully denied the accusation of bigotry during confirmation hearings. VanDyke was then confirmed by the U.S. Senate in December of 2019.