They Were ‘Literally in Bed Together’: Murder Defendant Demands New Trial Due to Judge’s Sexual ‘Affair’ with Prosecutor 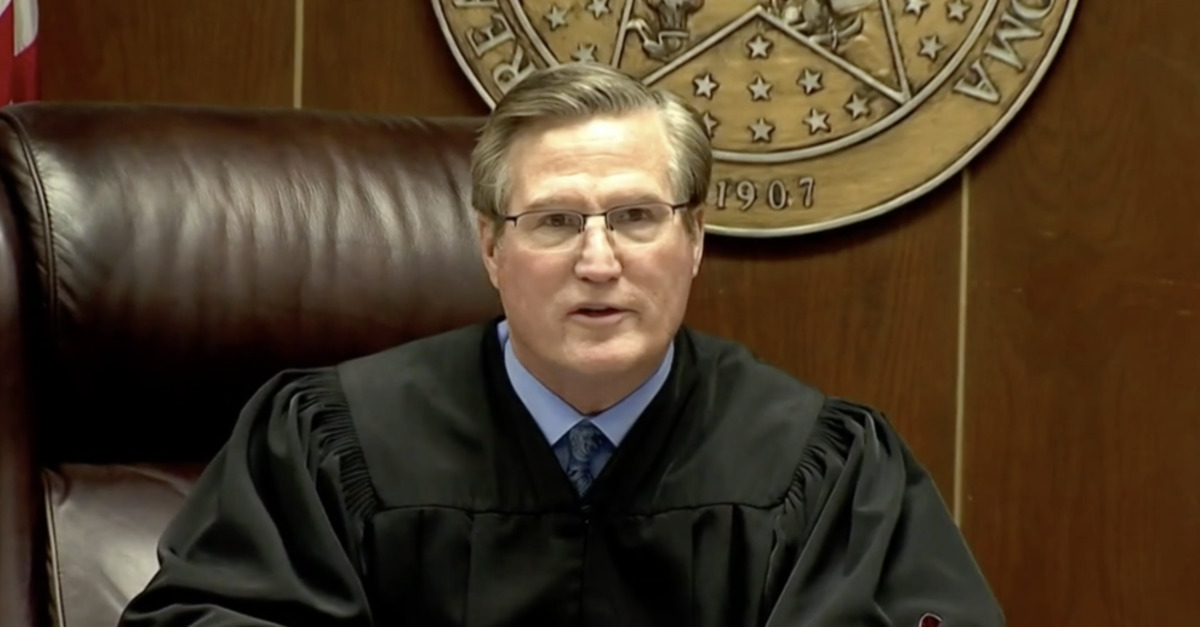 A former judge from Oklahoma who reportedly admitted to having a sexual “affair” with at least one prosecutor who appeared before his court earlier this year is now facing scrutiny from a defendant whose trial the judge oversaw.

Onetime Oklahoma County district judge Tim Henderson, 63, claimed consensual “sexual conduct” with the prosecutor had no bearing on the high-profile case of Robert Leon Hashagen III, who was convicted of murder in the first degree by jurors in Henderson’s court on Feb. 2.  That’s according to reports from The Oklahoman of Oklahoma City.

The since-retired judge also admittedly carried on sexually with at least one other female prosecutor in the same office, the reports indicate.  But there are even more accusers.

Hashagen was tried over a 2013 burglary gone awry that led to the death of 94-year-old gardener and birdwatcher Evelyn Goodall.  The defendant now says he deserves a new trial due to the judge’s conduct with the prosecutor.

“It is no exaggeration to state that the very integrity of the judiciary in Oklahoma is at stake here,” attorney James Lockard argued in a brief obtained by The Oklahoman. “If a man can be convicted and sentenced to die in prison at a trial before a judge and prosecutor who were literally in bed together, then no citizen of Oklahoma can or should expect to get a fair trial in any Oklahoma court.”

“We can’t have faith that the verdict is a fair one,” Lockard argued at an evidentiary hearing earlier this week. That hearing was ordered by the Oklahoma Court of Criminal Appeals in October.

“The allegations contained in the motion for new trial strike at the heart of an accused’s constitutional due process right to a fair trial before a fair tribunal,” the appeals court previously ruled, per The Oklahoman.

A state judicial complaint investigator learned that Henderson “on numerous occasions” called one prosecutor into his chambers, kissed the prosecutor, grabbed the prosecutor’s “breasts and buttocks,” and even “got [the prosecutor] to the floor and ‘dry humped'” the attorney, just one in a series of search warrants alleges.

A second accuser also came forward. The documents say both women ultimately reported that Henderson inserted his “fingers in the vagina of both women.”

Investigators learned that Henderson used a Hotmail account to prevent his wife from seeing his communications with the women, the documents indicate.

Another document goes into additional and explicit detail as relayed by one of the accusers:

She was an attorney and worked in Henderson’s courtroom for a few years when she was a new lawyer, beginning in 2015. The first year Henderson was like a mentor to her. He reviewed case law with her and was encouraging. He was well-liked and well-respected by everyone.

The first time he touched her was in spring 2016. Individual 1 was in the courtroom at the end of the day and as Henderson walked by, he ran his hand across her butt. She was shocked and left. She was shaken. She convinced herself it must have been a mistake.

The next week, Henderson called her to his office. He shut door, turned her around, kissed her and put her hand on his erect penis (over the clothes). He told her he’d wanted to do that for a while. She left, feeling terrified about what he did, the power he had in the courtroom and legal community. She had been a lawyer only one year and she thought her career would be over.

From the summer of 2016 up until summer 2018, Henderson had Individual 1 come to his office multiple times a month to meet with him privately. Sometimes he did not do anything inappropriate. Other times, he shut the door and touched her breasts over her clothes and under her clothes. He would sometimes strip down to his white brief style underwear. He lay on top of her and “dry humped” her. There were times Henderson “fingered” her at this location and other locations he instructed her to go to.

“She did not want to engage in anything Henderson did,” an Oklahoma State Bureau of Investigation agent wrote in documents. “But the longer the touching went on, the more trapped she felt — like it was too late to get out of it. He also frequently mentioned he always had a gun with him — in his office, in the courtroom, and outside the courthouse.”

The document then detailed allegations from a second accuser:

She was a new lawyer when she was assigned to Henderson’s courtroom in 2019. He was very tough, but well-respected and well-known in the legal community. He was like a mentor to her. He critiqued how she did in the courtroom, gave her case law to study, and was supportive of her career.

After being assigned to Henderson for several months, with nothing inappropriate occurring, in late January or early February 2020, the situation changed. He began hugging her — at first side-to-side and then face-to-face. In February 2020, after a DUI case, Individual 2 was in Henderson’s office and complained about the attorney on the other side. He hugged her and said something like, “Yeah, he’s a real pain in the ass” and grabbed and squeezed her buttocks. She left and got in the elevator, tearing up. She was shocked and didn’t know what to do. She didn’t feel like she could tell anyone because of who he was.

From there, it progressed to more hugs and touching on her back or waist. She did not initiate anything and did not want him to do that. She kept thinking she could handle it and no one needed to know. She did not want rumors going around about her and for her career to be ruined.

The judge says he did nothing wrong viz. the interests of justice or with regard to the women.

“At all times during the Hashagen case I maintained my role as a neutral and detached judicial officer,” Henderson wrote in a statement to the investigating authorities. “My rulings were fair and supported by the evidence and facts presented by the attorneys.”

According to the married ex-cop, prosecutor, and judge, his so-called affair with the prosecutor who worked on Hashagen’s case included “sexual conduct in my office, in her apartment and in hotel rooms secured by and paid for by” the prosecutor herself.

His attorney claims to have incriminating emails from the ADA where she asks him “to do various sexual things” as well as nude photos sent to the judge.

“We have nothing to hide,” Henderson’s attorney Tracy Schumacher said in May. “This isn’t a whodunit. It’s a what is it. The DNA isn’t going to tell them if it was consensual or not consensual.”

“Did he have affairs with those two prosecutors?” she added. “Absolutely, he did. Consensual affairs.”

The defense attorney said a total of four women have made similar allegations against Henderson.

The former jurist’s admitted sexual escapades have, so far, resulted in a second review of a case by the Oklahoma Court of Criminal Appeals.

A man convicted of selling drugs last year recently complained on appeal that Henderson lacked impartiality “because he was sexually assaulting or having an affair with the prosecuting attorney in this case.”

“No reasonable person would believe after these allegations have come to light that there is not actual bias,” the man’s attorneys wrote. “At the very least there is definitely an appearance of bias.”