Rep. Scott Perry Is the Only GOP Congressman Named So Far for Allegedly Seeking Trump’s Pardon. Here’s Why He Might Have Wanted One. 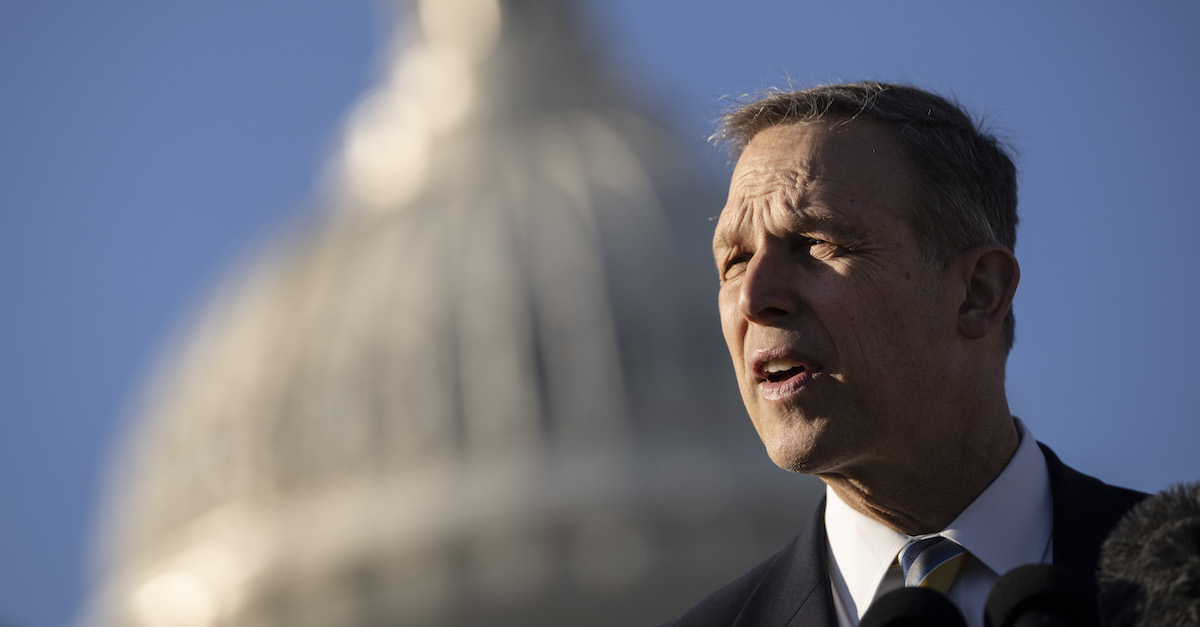 Rep. Scott Perry (R-Penn.) speaks during a news conference with members of the House Freedom Caucus outside the U.S. Capitol on Feb. 28, 2022 in Washington.

During the debut public hearing of the Jan. 6 Committee, Rep. Liz Cheney (R-Wyo.) asserted that multiple GOP Congress members sought Donald Trump’s pardon in connection with the attack on the U.S. Capitol, but she only called out one by name: Rep. Scott Perry.

“As you will see, Rep. Perry contacted the White House in the weeks after January 6th to seek a Presidential Pardon,” Cheney declared in her opening statement. “Multiple other Republican congressmen also sought Presidential Pardons for their roles in attempting to overturn the 2020 election.”

Perry’s press secretary Jay Ostrich calling the allegation a “ludicrous and soulless lie” in an email to Law&Crime.

The Los Angeles Times reported that Cheney has proof for her claim, and her press office did not immediately respond to Law&Crime’s press inquiry. But the committee’s letters to Perry show why they believe he may have sought the 45th president’s protection. One of those documents largely focuses on Perry’s alleged attempt to have Trump-loyalist lawyer Jeffrey Clark lead the Department of Justice.

“We have received evidence from multiple witnesses that you had an important role in the efforts to install Mr. Clark as acting Attorney General,” Jan. 6 Committee Chair Bennie Thompson (D-Miss.) wrote in a letter on Dec. 20, 2021.

“We are also aware that you had multiple text and other communications with President Trump’s former Chief of Staff regarding Mr. Clark—and we also have evidence indicating that in that time frame you sent communications to the former Chief of Staff using the encrypted Signal app,” the Dec. 20 letter stated. “Mr. Clark has informed us that he plans to invoke his 5th Amendment right against self-incrimination in anticipation of a deposition to be conducted by the Committee. When Mr. Clark decided to invoke his 5th Amendment rights, he understood that we planned to pose questions addressing his interactions with you, among a host of other topics.”

Former federal prosecutor Mitchell Epner, a partner at the firm Rottenberg Lipman Rich PC, reviewed the committee’s letter and identified a few statutes that might have concerned Perry.

The first may have been obstruction of justice, “depending upon what he actually did with regard to the attempt to replace the acting Attorney General,” Epner said.

Since the Signal app allows for disappearing messages, Epner noted, another possible statute of concern could have been the Presidential Records Act, which requires presidential papers to be archived and not destroyed.

It is likewise possible Perry had concerns about conspiracy to defraud the United States, a statute that a federal judge found that Trump and his lawyer John Eastman “likely” violated.

Though it would have been a “stretch,” Epner said, Perry could have been concerned with the same statute deployed against the Proud Boys and the Oath Keepers: seditious conspiracy.

Perry, a retired Pennsylvania Army National Guard brigadier general, has a business background, but if he sought counsel from a criminal defense attorney, the lawyer could have advised him to seek a more blanket pardon.

“If you get a pardon from the president, saying anything that you’ve done from Election Day and now, that covers a multitude of sins,” Epner said.

This past April, CNN reported that Perry sent Trump’s chief of staff Mark Meadows a text just days after the 2020 election urging him to reverse or delay the certification of President Joe Biden’s victory. That message echoed baseless claims about voting machines.

“From an Intel friend: DNI needs to task NSA to immediately seize and begin looking for international comms related to Dominion,” Perry wrote to Meadows on Nov. 12, five days after the election was called for Biden.

“In addition, we have information indicating that you communicated at various relevant times with the White House and others involved in other relevant topics, including regarding allegations that the Dominion voting machines had been corrupted,” the Dec. 20 letter stated.

That communication sought Perry’s voluntary cooperation with the committee’s probe.

After Perry declined, the committee issued subpoenas to him and four other members of Congress: Minority Leader Kevin McCarthy of California and Reps. Jim Jordan of Ohio, Andy Biggs of Arizona, and Mo Brooks of Alabama.

Read the committee’s letter from last year, below: