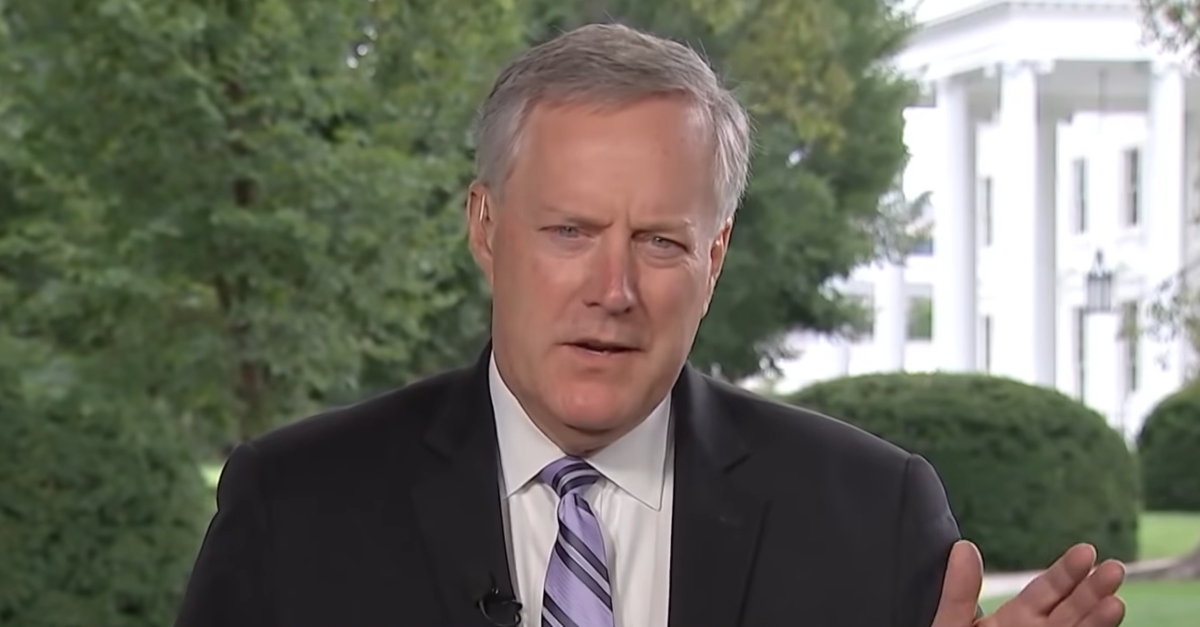 In late October, U.S. District Judge Carl Nichols, a Trump appointee, found that he did not have subject matter jurisdiction to weigh into the dispute between Meadows and the Committee. Meadows asked the judge to reconsider that decision and stay his prior ruling in order to maintain the status quo.

But Nichols found that putting a hold on his October opinion would not affect the stay of play.

“Because the Congressional Defendants (for whatever reason) did not pursue affirmative claims against Meadows, the Court’s dismissal of Meadows’s claims does not obligate him to take any action,” Nichols wrote. “And because Meadows never sought (and thus the Court never granted) preliminary injunctive relief against the Congressional Defendants, the dismissal of his claims does not allow those Defendants to take any action that they were prevented from taking by Court order.”

The Committee sought Meadows’s testimony, documents, and cell phone records, which were being held by Verizon.

“As for Verizon, it has never been a party to this litigation, and thus the Court has never ordered Verizon to take or refrain from taking any action,” Thursday’s ruling states.

On Sept. 23, 2021, the Jan. 6th Committee issued a subpoena to Meadows, telling him the panel found “credible evidence of your involvement in events within the scope of the Select Committee’s inquiry.”

“It appears that you were with or in the vicinity of President Trump on January 6, had communications with the President and others on January 6 regarding events at the Capitol, and are a witness regarding activities of that day,” the committee’s chairman, Rep. Bennie Thompson (D-Miss.), wrote at the time. “Moreover, it has been reported that you were engaged in multiple elements of the planning and preparation of efforts to contest the presidential election and delay the counting of electoral votes. In addition, according to documents provided by the Department of Justice, while you were the President’s Chief of Staff, you directly communicated with the highest officials at the Department of Justice requesting investigations into election fraud matters in several states.”

Citing reporting by Reuters and ProPublica, the Committee added: “We understand that in the weeks after the November 2020 election, you contacted several state officials to encourage investigation of allegations of election fraud, even after such allegations had been dismissed by state and federal courts, and after the Electoral College had met and voted on December 14, 2020.”

“Moreover, at least one press report indicates you were in communication with organizers of the January 6 rally, including Amy Kremer of Women for America First,” it continued, referring to the longtime tea party operative.

Meadows fought the subpoena in court later that year, but the Jan. 6th Committee’s tenure is likely drawing to a close in the wake of the midterm elections. Republicans narrowly notched a majority of the House of Representatives, and with that control, they will likely disband the committee.

House Republicans already signaled plans to turn to other investigations, including of President Joe Biden and his son Hunter Biden.