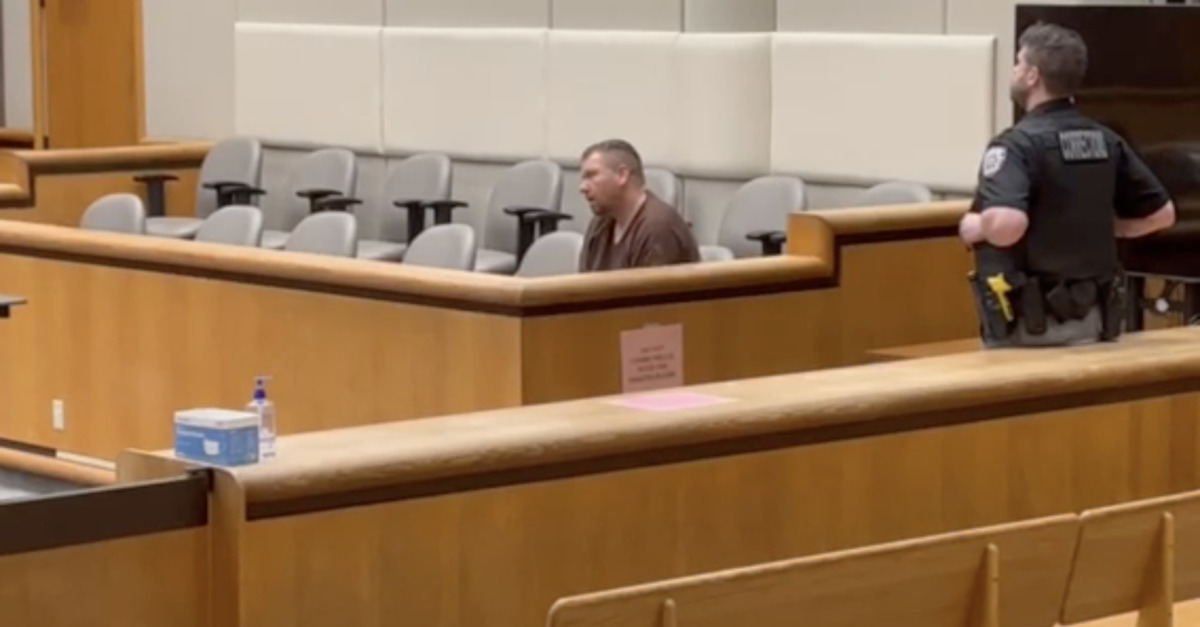 Christopher Calvert, 44, stands accused of murder in the first degree over the brutal killing of beloved 76-year-old symphony musician Clayton “Clay” Wick in Kennewick, Wash. The victim is believed to have died either late last month or sometime earlier this week — the first week of May.

According to court documents obtained by Pasco, Wash. CBS affiliate KEPR, Wick was killed in his own home and his blood was found in several rooms and on several items throughout the residence.

Blood stains, smears, and spatter were found on both levels of Wick’s home, law enforcement reportedly wrote. A trail of blood led from a landing near the kitchen down to the basement. Smears of blood reportedly caked the stairs all the way down. At the bottom of that trail, those documents said, was a large pool of blood. The victim’s body was found hidden under a blanket in the basement laundry room, the documents are said to indicate.

Police believe Wick was beaten and stabbed. Three bloody knives, a fire poker, and a wrench were reportedly found spread about his home.

“We believe that Mr. Wick’s death was caused by a violent assault and blunt force trauma, but an autopsy will further reveal in the future his actual cause of death,” Kennewick Police Department Lieutenant Jason Kiel said. “It was a violent scene and like I said before there was a substantial amount of evidence.”

Kennewick is the largest of the three cities that make up the Tri-Cities region in the eastern part of the Evergreen State.

An earlier story by Yakima, Wash. NBC affiliate KNDO cited the KPD as saying over a month’s worth of evidence had been collected in the case since the victim’s body was discovered on May 3, 2022.

Court records cited by the Tri-City Herald allege the killer placed pieces of cardboard on top of some of the blood in an effort to avoid stepping on it.

That apparent care with the crime scene allegedly didn’t extend to what occurred after the murder, police say. The defendant was arrested after allegedly being spotted driving Wick’s green Honda CRV on Thursday, May 5, 2022 after leading authorities on a chase through Skamania, Wash., The Columbian reports.

While a motive was initially elusive in the case, according to law enforcement, authorities now believe Wick’s killing may have been a convoluted attempt at extracting revenge over a recent job loss.

To be clear, Wick is not currently believed, at least not publicly as of this writing, to have had any role over Calvert being fired from the farm in Hermiston, Ore. where he previously worked. Rather, that farm is owned by Darren Cox, a close friend of the deceased man.

According to the Herald, court documents cite a friend of the defendant saying he offered to help Calvert sabotage Cox’s sprinklers. Calvert allegedly told his friend that he had done better than that.

“Chris had told him that the guy had no family, so no one will know,” those records say. “He added that he had even met Clayton Wick at Darren’s farm in the past and he knew that Clayton was a very nice man and could not believe what Chris had done.”

“You know how hard it is to kill someone with a butter knife?” the defendant allegedly asked his friend rhetorically.