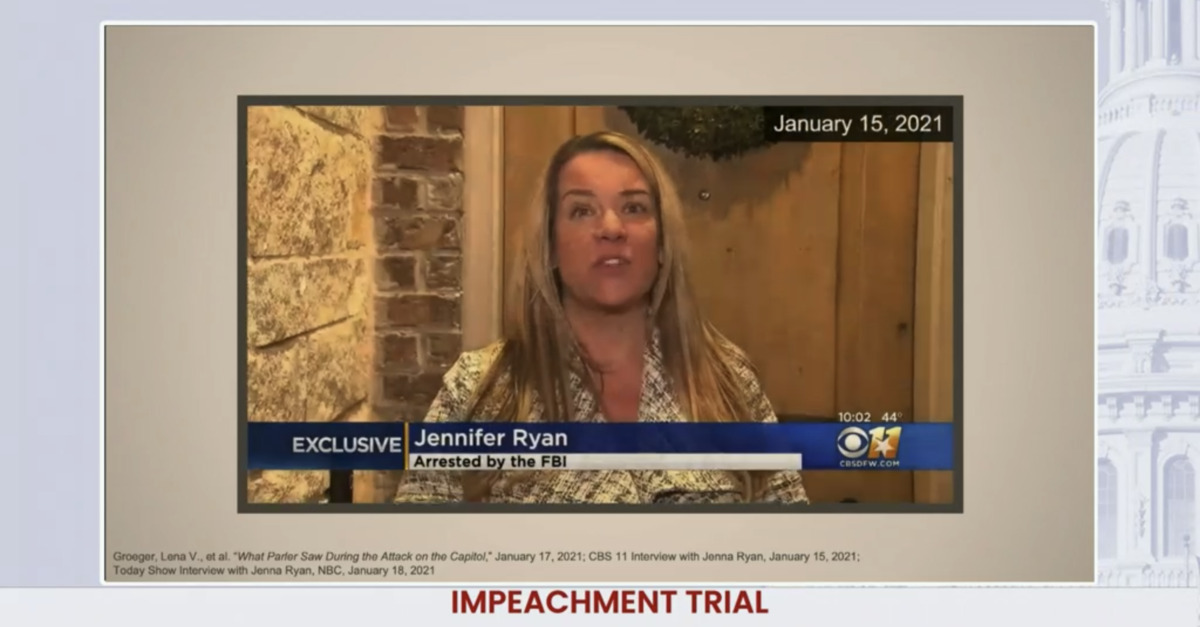 That accounting of her actions, offered to a news reporter in service of an ultimately unsuccessful and highly public plea for a presidential pardon, came immediately after Ryan was charged with entering restricted grounds and disorderly conduct on Capitol grounds over her participation in the pro-Trump Jan. 6 attack on the U.S. Capitol.

Ryan became something of a meme for ridiculing online critics who salivated for her to be arrested, for her actions leading up to the siege, and after she was charged. Democrats insist that Ryan is actually not so unique at all — at least not in terms of what got her to the Capitol on that fateful day.

“President Trump, once again, failed us,” Neguse said, addressing the senators-jurors. “Because when the violence erupted—when we and the law enforcement officials protecting us, protecting you, were under attack, as each of you were being evacuated from this chamber from a violent mob, as we were being evacuated from the House—he could have immediately and forcefully intervened to stop the violence. It was his duty as commander-in-chief to stop the violence. And he alone had that power. Not just because of his unique role as commander-in-chief but because they believed that they were following his orders. They said so.”

The Colorado Democrat then played a montage of pro-Trump rioters who implicitly and explicitly made clear their allegiance.

“We were invited by the president of the United States!” another man screams through an amplified public address system.

The montage then cuts to two clips of Ryan.

After speaking with the local, Fort Worth-based outlet, Ryan then sat down for a lengthy interview with NBC News’s Cynthia McFadden. During that interview, she expressed pride in her actions but again made clear that she believed she was following orders.

The impeachment managers highlighted that interview as well: “President Trump requested that we be in D.C. on the sixth.”

Neguse then picked up the thread.

“You heard it from them,” he said, “They were doing what he wanted them to do. They wouldn’t have listened to you, to me, to the vice president of the United States who they were attacking. They didn’t stop in the face of law enforcement—police officers fighting for their lives to stop them. They were following the president. He alone, our commander-in-chief, had the power to stop them. And he didn’t.”