Texas Real Estate Agent Who Requested Insurrection Pardon Says She Went to D.C. Because a ‘Cute Guy’ Asked Her. He Got with Another Woman. 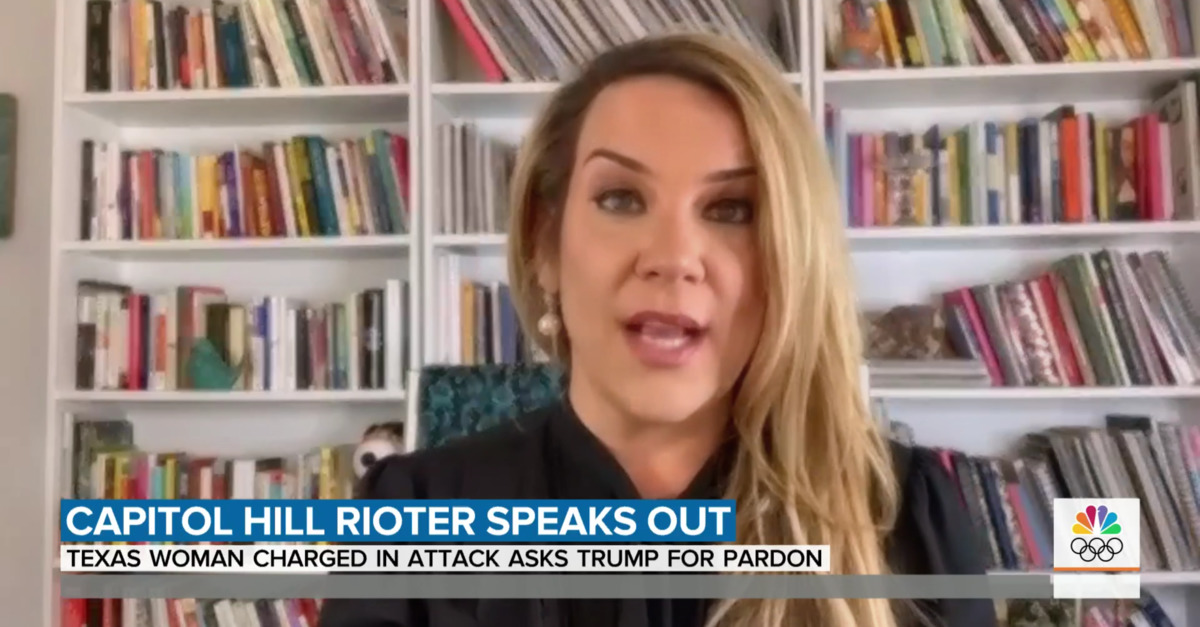 Jenna Ryan, the highly-memed Texas real estate agent who admittedly took part in the pro-GOP siege of the U.S. Capitol Complex on January 6, says to forget about expecting any regret from her.

“I personally feel innocent in everything that I have done,” Ryan, 50, recently told NBC News during a lengthy interview. “I feel like the police officers were ushering people into the Capitol. There were thousands of people there. I have no guilt in my heart. My intention was not to have a riot. I did not want to have a riot. I was documenting what was going on in the environment I was in.”

In one social media post, recently cited by the FBI, Ryan can be heard saying: “We’re gonna go down and storm the Capitol.”

Ryan waxed philosophical about her word choice when faced with that social media post by NBC’s Cynthia McFadden:

At the center of that storm, however, was a lonely heart yearning for connection. There’s little time or space for guilt when the physical state of the highest human emotion manifests itself amidst the highest heights and whipping winds of the blue Texas skies.

During that “freewheeling” interview, Ryan, who took a private jet to the fracas, said her attendance at President Donald Trump’s “Stop the Steal” rally started with an invitation from a “very cute guy.”

The attractive stranger, Ryan said, was the owner of the jet. The small group socialized and imbibed alcohol in honor of Trump during the ride to Washington, D.C.

“He was adorable,” Ryan told NBC. “And there was another adorable girl there, too, and they ended up getting together, darn it.”

But, of course, it wasn’t love alone that was under siege that day.

Ryan and at least hundreds of fellow travelers broke into the national seat of government as part of a vengeful mob that laid waste to several rooms. Five people died as a result of the chaotic, far-right attack aimed at interrupting the counting of electoral college votes.

On Friday, the 50-year-old life coach and real estate professional was slapped with federal charges of disorderly conduct and knowingly entering a restricted government area. She faces over a year in prison.

“I’m glad I was there,” Ryan added later in the NBC interview. “Because I witnessed history. And I’ll never get the chance to do that again…No one will probably ever be able to go near [the U.S. Capitol Complex] again.”

As Law&Crime previously reported, Ryan believes she (and everyone else) is entitled to a pardon from the outgoing 45th president.

“I would like a pardon from the President of the United States,” Ryan told Fort Worth-based CBS affiliate last Friday. “I think that we all deserve a pardon; we — I’m — I’m facing a prison sentence. Um — I think that I do not deserve that, and I think every person — you know — from what I understand — everyone’s going to be arrested that was there. So, I would — I think everyone deserves a pardon and I would ask the President of the United States to give me a pardon.”

Trump is expected to issue over 100 pardons during the final hours of his presidency. Many commentators have raised the possibility of pardons for his followers who stormed the Capitol earlier this month. This potentiality remains an open question but has clearly given his adherents hope. Sen. Lindsey Graham (R-S.C.), for one, said it would be “wrong” for Trump do that.

The Austin American-Statesman took note of Ryan’s livestream from the U.S. Capitol siege that fate-heavy Wednesday:

“We are going to [fucking] go in here. Life or death, it doesn’t matter. Here we go,” she said, wearing a red, white and blue knit hat with “Trump” emblazoned on it, in a now-deleted video…Ryan added, turning to the camera, “Y’all know who to hire for your Realtor. Jenna Ryan for your Realtor.”