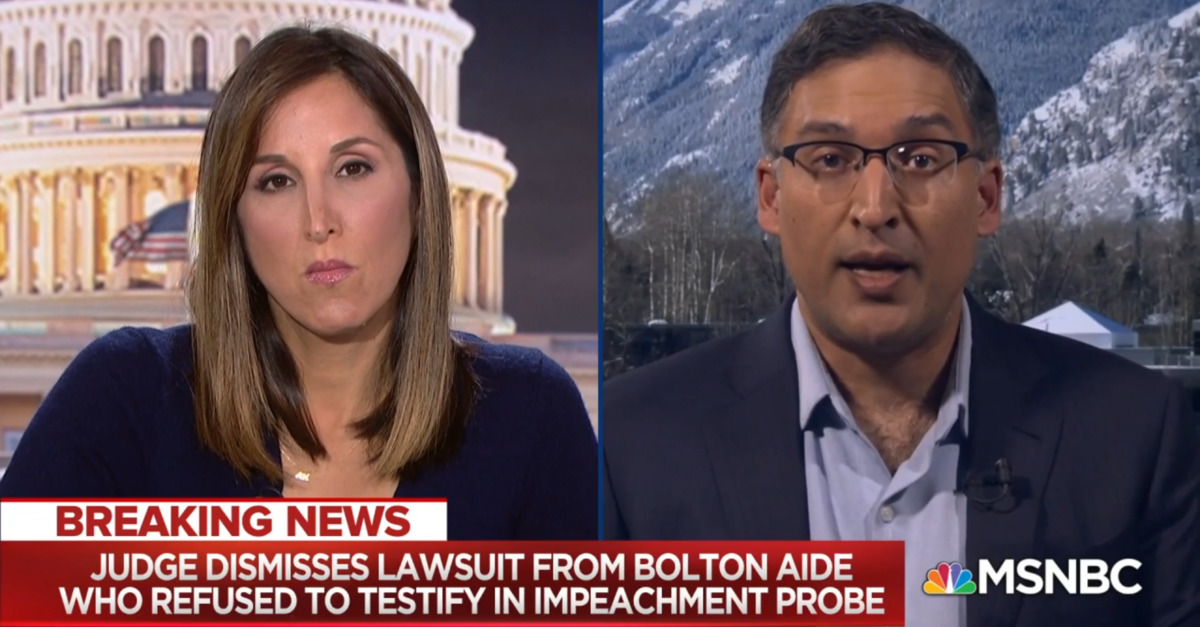 Former acting Solicitor General of the United States Neal Katyal thinks that John Bolton‘s attempts to dodge congressional investigators have run their course. And the possibility of Bolton testifying during the eventual Senate impeachment trial may be bad news for President Donald Trump.

During a Monday evening segment of Opening Arguments on MSNBC, Katyal was asked to comment on a federal judge’s dismissal of a lawsuit filed by Bolton’s former deputy, Dr. Charles Kupperman. That lawsuit was an attempt to square the circle between the House Intelligence Committee’s duly-authorized subpoenas and Trump’s widely-criticized gag order barring administration employees past and present from providing information to impeachment investigators.

Bolton had previously signaled that he was relying directly on the outcome of Kupperman’s action in order to inform his own behavior viz. congressional impeachment investigators efforts have him testify as well. Bolton, however, was never issued a subpoena–earlier threatening legal action himself were the House to take such action–and the House withdrew its subpoena of Kupperman, leading Judge Richard Leon to declare Kupperman’s lawsuit moot.

“Dr. Kupperman, my former deputy, is in litigation now on what to me is a critical separation of powers question,” Bolton recently told NPR. “When the House issues a subpoena – and in his case, and I think it would be true in mine – and the President tells him not to testify, which authority controls? Dr. Kupperman went to court to seek the third branch’s opinion in this conflict between the first two. I think that’s a very important issue that needs to be resolved.”

“We have that opinion, it’s now moot,” anchor Yasmin Vossoughian noted. “Nothing seems to be standing the way of Bolton’s testimony. Is that excuse now gone?”

“I think the bottom line is that: John Bolton now has no rock to hide behind anymore,” Katyal said. “He really should testify.”

The basic way this works is in impeachment hearings from our nation’s history from the start on, because impeachment is the sole remedy the American people have against an abusive president, documents and witnesses come out. For example the Andrew Johnson Senate trial, there were 41 witnesses. President Polk won 72-46. In impeachment situations, Congress should get everything that they want.

And what President Trump did, is he issued an unprecedented gag order–it’s never happened before in American history–the president has said everything, every witness, every document can’t be turned over,” Katyal continued. “And there were obviously some witnesses, including Trump administration officials, who defied that and went and testified in Congress like Ambassador [Gordon] Sondland, Fiona Hill and the like. But Bolton and Kupperman did not. They instead filed a lawsuit saying: ‘we don’t know what to do.'”

“Now, while their lawsuit was pending, there was a separate case involving Don McGahn, the White House counsel,” Katyal explained. “And in an opinion by Judge [Ketanji Brown] Jackson, she rejected–in the most sweeping, elegant terms–Trump’s claims about immunity and not having these witnesses testify and the like. And the bottom line is now: Judge Jackson’s opinion, which says, quote, ‘President’s aren’t kings and folks like McGahn have to testify’ is now going to control what Bolton has to do.”

Vossoughian then noted that Mick Mulvaney had unsuccessfully attempted to wrap himself up in the legal camouflage of the Kupperman lawsuit but was subsequently shut down by Bolton and his former deputy because they weren’t “on the same team.”

“All these witnesses were trying to hide and not tell what they know to the American people,” Katyal responded, referring to recent media coverage about various potential White House-affiliated impeachment witnesses who have attempted to “hide behind these rocks.”

Katyal went on to describe the situation inside the White House:

And what the federal judges have said, and in particular Judge Jackson, is ‘uh-uh, you can’t do that, this is the American people’s right.’ And what Donald Trump is essentially doing is saying, even in a Republican-controlled Senate, the Senate that his party controls, he’s not going to let these witnesses testify. He’s afraid of the truth coming out. He’s acting as guilty as sin.