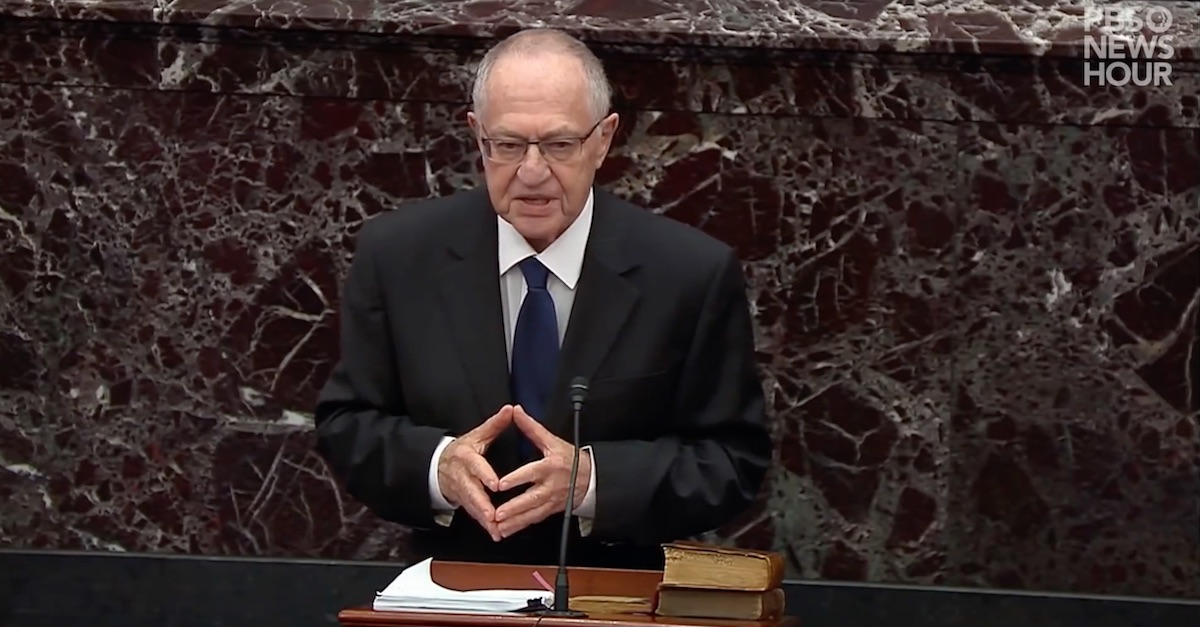 After being impeached by the House of Representatives for his role in inciting the attack on the U.S. Capitol earlier this month, at least one major question still hangs over the post-presidency of Donald Trump: Does the U.S. Senate have the constitutional authority to try him now that he’s no longer in office? While the many legal scholars seem to agree that a former official remains subject to impeachment, there is little precedent to rely on and no president has ever been tried after leaving office.

According to former Trump Impeachment lawyer and Harvard Law School professor emeritus Alan Dershowitz, that answer is an emphatic “no.” In a new op-ed published in the Wall Street Journal on Wednesday, the criminal defense attorney argued that U.S. Constitution only allows the U.S. Senate to exercise jurisdiction over persons currently holding public office.

To bolster his argument, Dershowitz points to the language of Article I Section 3, which reads:

“Judgment in Cases of Impeachment shall not extend further than to removal from Office, and disqualification to hold and enjoy any Office of honor, Trust or Profit under the United States: but the Party convicted shall nevertheless be liable and subject to Indictment, Trial, Judgment and Punishment, according to Law.”

Dershowitz specifically highlights that the clause mandates senatorial judgment on removal and disqualification—not or disqualification. Thus, since a former office holder cannot be removed, that person also cannot be disqualified from office.=, the argument goes.

One example offered by Dershowitz is the non-impeachment of an obviously guilty Richard Nixon in the wake of the Watergate scandal.

“Beyond the constitution, there are strong policy and historical reasons an incoming administration shouldn’t seek recriminations against its predecessor. In some countries defeated former presidents and prime ministers are routinely prosecuted,” he wrote. “For the victorious Democrats to seek revenge against Donald Trump would set a terrible precedent, distract from President Biden’s agenda, and make it hard to heal the country. Better to move on.”

Nixon, of course, resigned and was pardoned by Gerald Ford.

Dershowitz’s constitutional argument is supported by Tulane Law School lecturer and impeachment expert Ross Garber. Garber similarly asserts that the Senate only retains jurisdiction to try a sitting president, but said the case of a different Nixon might make the argument difficult for Trump.

In 1993, the U.S. Supreme Court ruled that federal judge Walter Nixon could not challenge his conviction and removal from office, holding that the court cannot review the Senate’s trial procedures.

“I think the reasoning of Nixon (case) could be a problem for any Trump litigation effort,” Garber told CNN, adding that “it is very unlikely the Supreme Court would stop the Senate in its tracks in a direct Trump challenge to its jurisdiction.”

He further said that, from a strategy standpoint, “Trump is likely better off not litigating but instead appealing directly to the senators.”

Dershowitz recently told Law&Crime he would defend Trump at a second impeachment trial if asked.