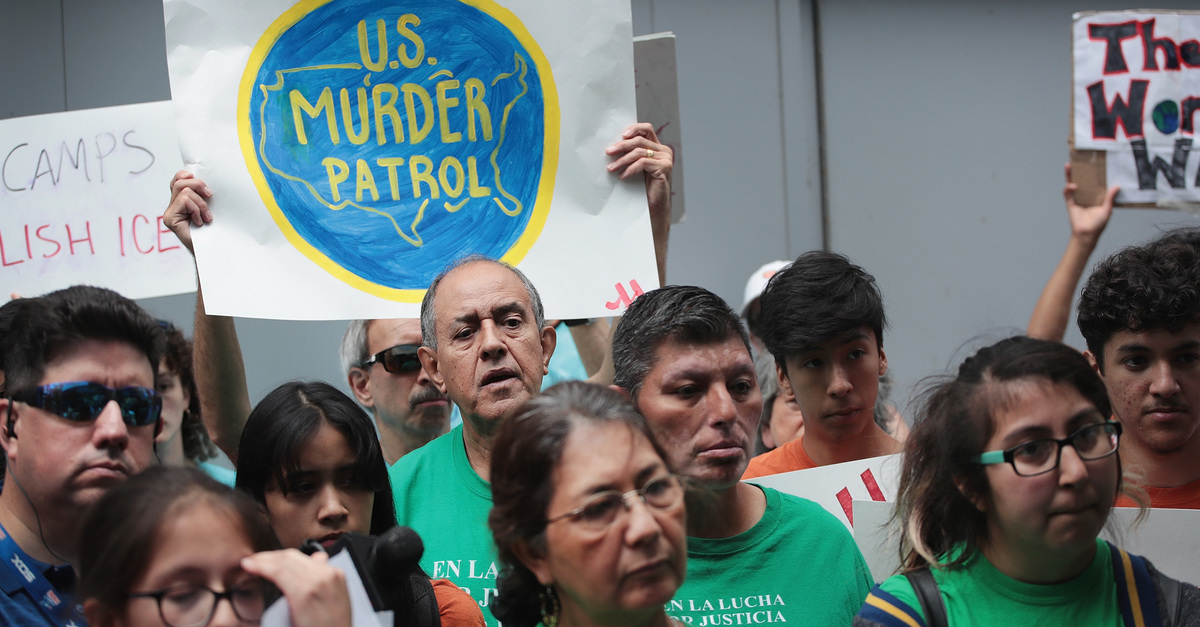 According to the San Diego Union-Tribune, an unknown number of CBP agents intentionally abused the Department of Homeland Security’s (DHS) Migrant Protection Protocols in order to keep many migrants out of the United States more or less permanently.

Those protocols, which were put into effect in January of this year, stipulate that certain asylum seekers must remain in Mexico while their cases are pending before the U.S. immigration court system, “where Mexico will provide them with all appropriate humanitarian protections for the duration of their stay,” according to DHS.

The relatively new policy “applies to aliens arriving in the U.S. on land from Mexico (including those apprehended along the border) who are not clearly admissible and who are placed in removal proceedings under [federal law authorizing deportation],” DHS notes. “This includes aliens who claim a fear of return to Mexico at any point during apprehension, processing, or such proceedings, but who have been assessed not to be more likely than not to face persecution or torture in Mexico. Unaccompanied alien children and aliens in expedited removal proceedings,” are not subject to the policy.

Mexican authorities agreed to facilitate the policy but issued a lengthy statement about law and humanitarian principles which mandated that any immigrants sent to Mexico under the protocols must “have been interviewed by U.S. immigration authorities” and must “have received a notice to appear before an immigration judge.”

The problem with this system? Notices received by many migrants contained court dates that never existed and presumably never will.

[R]ecords obtained by the San Diego Union-Tribune show that on at least 14 occasions, Customs and Border Protection agents in California and Texas gave migrants who had already concluded their court cases documents with fraudulent future court dates written on them and sent the migrants back to Mexico anyway.

Under the “Guiding Principles” promulgated by CBP, immigration authorities at ports of entry “will provide aliens subject to [the protocols] a tear sheet containing information about the process, as well as a list of free or low-cost legal service providers.”

Those tear sheets are supposed to provide immigrants who have open immigration cases with date and time information–when and where to appear for the next stage of their legal asylum claim. But, according to those CBP records, immigrants with closed immigration cases were given court dates as well–and then sent to Mexico.

Typically, and in line with U.S. law, immigrants with closed cases are given parole and allowed to stay in the United States while more formalized deportation proceedings play out. Others are occasionally placed in federal detention based on varying factors specific to their case and personal history.

The upshot here is that many are placed into a state of legal limbo with no easy chance to appeal. Some falsely deported individuals reported being subjected to violence while unlawfully shuttled to Mexico. Simultaneously, the fraud contained in the documents suggests a violation of the accord struck with Mexican authorities because America’s immediately southern neighbor only agreed to take in immigrants with scheduled and valid court dates.

“This is fraud,” California-based immigration attorney Bashir Ghazialam told the Union-Tribune. “I don’t call everything fraud. This is the first time I’ve used the words, ‘U.S. government,’ and, ‘fraud,’ in the same sentence. No one should be OK with this.”

Ghazialam represents a family that was given a fraudulent tear sheet with a court date for November.

“That date is completely made up and the Mexican authorities are not trained enough to know this is a fake court date,” he told the outlet.

Angelo Guisado is a staff attorney with the Center for Constitutional Rights who also works on immigrants’ rights issues.

In a message to Law&Crime he said:

It is no surprise that, in addition to the myriad other ways the U.S. government attempts to restrict access to the asylum process, CBP is now issuing fake dates to asylum seekers under MPP. As immigration lawyers across the country know, ICE has been issuing fake dates on Notices to Appear for years, often times causing chaotic scenes like this. How on Earth an asylum seeker is supposed to competently represent their right to asylum with no attorney, in some ersatz tent court, before a Trump-appointed immigration judge, on a fake date, is beyond me.

Law&Crime repeatedly reached out to CBP and DHS for comment on this story but no response was forthcoming at the time of publication.