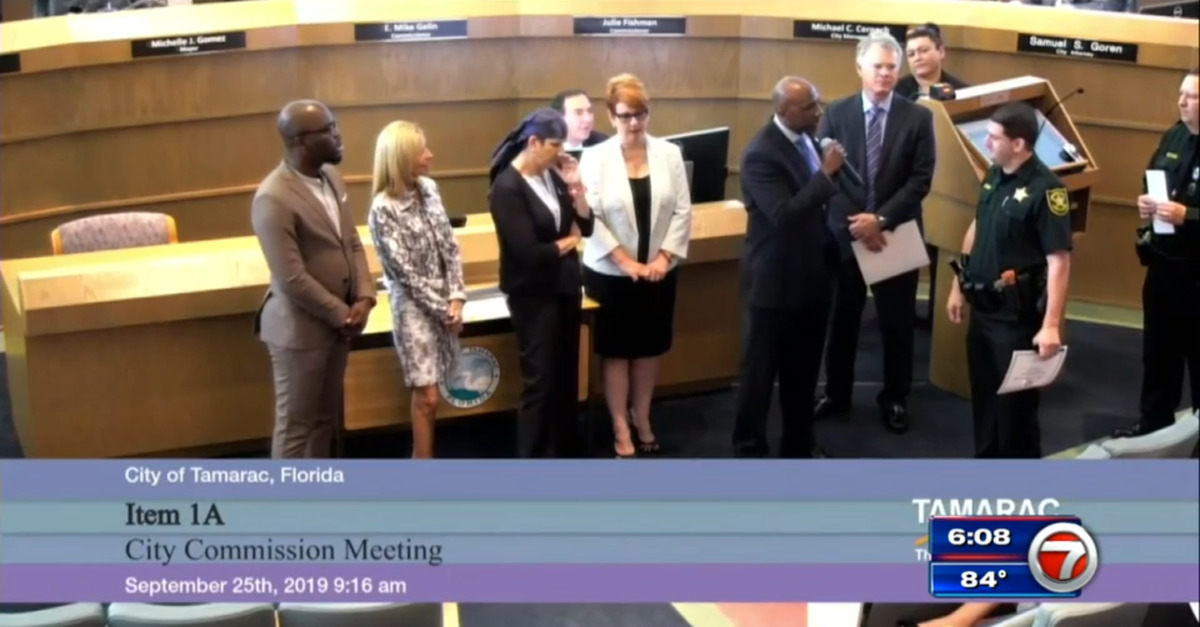 An elected official in Florida is winning himself heaps of praise and piles of scorn online–and in his local community–after publicly dressing down a police officer who had just been awarded a token of gratitude from city leaders naming him deputy of the month.

The comments were brief–uttered in just over 15 seconds. And all the while, Broward County Sheriff’s Deputy Joshua Gallardo smiled and nodded. Just minutes before his smiles had likely been less pained while he listened to speeches extolling his virtues and heroics in the line of duty. After Gelin spoke, there was a bit of awkward silence. Tamarac Mayor Michelle Gomez then thanked the deputies again.

“Did not know this was coming,” Gomez told local local Fox affiliate WSVN, “Did not think it was appropriate. It was the personal comments from something that happened in his personal life being aired in the wrong forum, wrong place, wrong time.”

Later that day, Gelin attempted to comment on a public budget hearing but most of his colleagues on the non-partisan city commission refused to acknowledge his presence. An attempt was then made by Commissioner Marlon Bolton to allow Gelin to be heard on the budget issue. That effort was voted down by Gomez, Vice Mayor Debra Placko and Commissioner Julie Fishman.

“One of the most important ideas of being an elected official is conducting oneself with dignity and in an ethical manner; not using the office you are in for personal gain or personal use,” Fishman later opined on Facebook. “And while I am a strong proponent of freedom of speech and did not give that up when I was elected, I am also a proponent of the right time and the right place.”

Fishman continued on by insisting that the public ceremony celebrating Gallardo was the incorrect place to criticize him while also differentiating the officer’s actions from Gelin’s quick call-out.

“Are mistakes made?” she asked out loud. “Yes, of course because while these officers train constantly, they are still human. What happened yesterday was a deliberate act for a specific purpose.”

Steve Feeley is the executive lieutenant at the Tamarac district for the Broward County Sheriff’s Office. In an op-ed column published Sunday, Feeley said he regretted sending his officer into the ceremony knowing the history between him and Gelin–and that an “even bigger regret of mine was not stopping Gelin from berating Gallardo in such an inappropriate way.”

Gelin is no friend of law enforcement. As a commissioner, he routinely points out instances in his commission reports where he accuses police of abusing their powers as law enforcement officers.

Gelin also earned a rebuke from a local police union–who withdrew their endorsement and said the commissioner lacked respect–and a sit-down with Broward County Sheriff Tony Gregory. That meeting was described as productive by local CBS affiliate WFOR.

The contretemps stems from a 2015 incident outside of a Salvation Army where two men were fighting. Gelin–after initially attempting to intervene–filmed law enforcement’s response to the scuffle. One of the responding officers was Gallardo, who apparently asked Gelin to stop filming and to remove himself from the immediate area.

Gelin spent some time in jail for resisting an officer without violence but prosecutors reviewed the footage on the eventual commissioner’s cell phone and declined to press charges.

“The arrest was a traumatic incident for me,” Gelin told the blog. “I was disrespected, humiliated, embarrassed, and spent nine hours in jail. I spent a significant amount of time and money finding a good attorney and dealing with the court system.”

And now, despite the possibility of censure from his colleagues, Gelin appears upbeat and even a bit emboldened by the national support he’s received for speaking out about his experience.

I have heard from people locally and nationally about their wrongful arrests and how some of them had to fight to clear their names. It’s not easy and I applaud them for telling the truth. It’s as if you are guilty until proven innocent when it should be the other way around.