Prosecutor: Amber Guyger Was ‘Caught in a Lie’ During Her Testimony 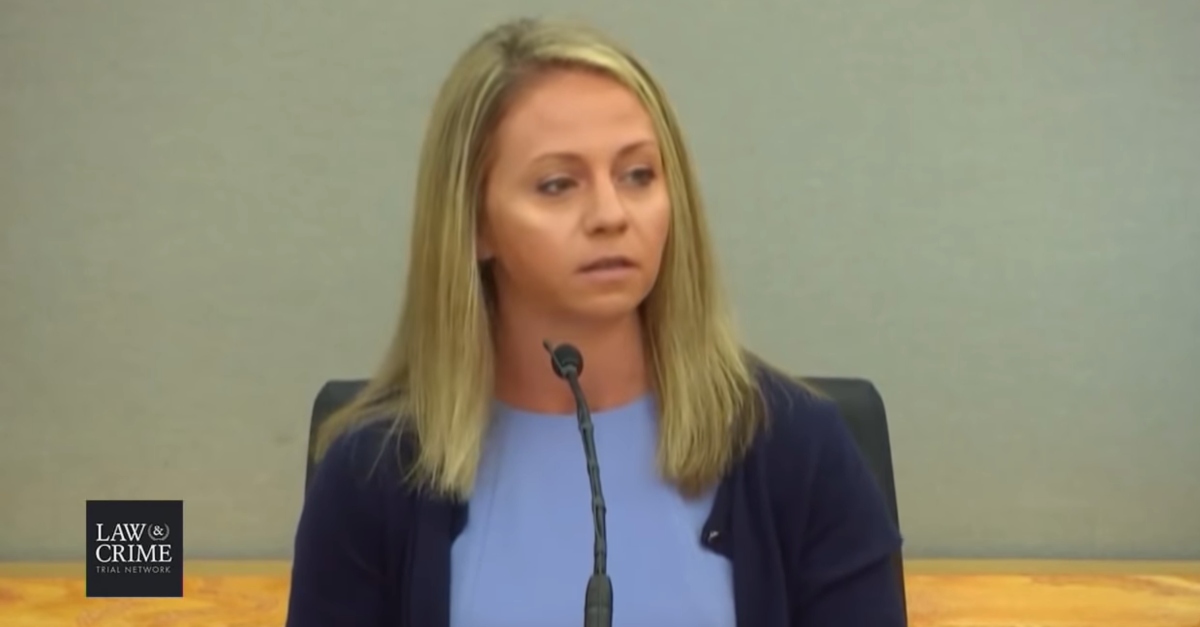 A prosecutor in the Amber Guyger murder trial claimed that the defendant, a former Dallas police officer, was “caught in a lie” during her testimony on Friday. Assistant District Attorney Jason Fine said in closing arguments that Guyger changed her story about fatally shooting neighbor Botham Jean, 26. At first, Guyger said Jean was by the back door and that he was coming at her; during redirect, she said that Jean was by the couch.

“She was caught in a lie,” said Fine. He posited that Guyger changed her story after fellow prosecutor Jason Hermus brought up physical evidence that the second shot was in the wall over by Jean’s couch.

“She sat up there and told you two different stories,” Fine continued. “She couldn’t even get her story straight.”

Guyger was charged with murder over the Sept. 6, 2018 shooting of Jean. They both lived in the same apartment complex on different floors. She accidentally parked on his floor after a long day at work, and mistook his apartment for hers, said the defense. His door wasn’t secure because there were problems with it. Prosecutors said Jean was in his living room getting ready to eat ice cream and watch TV. Guyger, however, believed that he was an intruder, and she fatally shot him believing that he was a danger to her, said the defense.

The prosecution has suggested that she shot the victim right as he was getting off the couch. Defense lawyer Toby Shook tried to show in closings that there’s no evidence Jean was on the couch at the time, though he was about to sit down and eat. It’s possible that he was shot at an angle because he might have crouched right before the fatal gunfire, said the defense.

They argued that Guyger’s mistake was reasonable under the law. She initially believed this was her apartment, and that this stranger was going to hurt her, said Shook.

Jean’s death was a tragedy, but various evidence presented by the state–Guyger’s affair with a police partner, that she didn’t say on the 911 call that she felt like she was in danger–was designed to anger the jury, and lead them away from making a verdict based on the law, said Shook. All of that was irrelevant to what Guyger saw and experienced at the time of the shooting, said the defense.

At Jean’s door alone, she missed five signs that she was in the wrong place: Jean’s bright red floormat at the door, the apartment number, the red blinking light at the door lock when she tried to open it, the lack of a whirring sensation from the door lock, and the obvious difference in sensation in standing on a doormat as opposed to concrete. Guyger also didn’t note the obvious marijuana smell in Jean’s apartment, and the difference in the interior.

“This is a trained professional,” he said. Fine dismissed the defense’s attempt to use castle doctrine because it wasn’t actually her apartment.

The prosecutor began his closing arguments by reading aloud a part of Guyger’s testimony.

“I never want anybody to ever have to go through, or even imagine going through what I felt that night,” the defendant said.

“Are you kidding me?” Fine said, balling up a piece of paper. He argued that most of what Guyger said was “garbage.”