William Barr Said He Recused Himself from Review of Prior Esptein Case. Here’s Why. 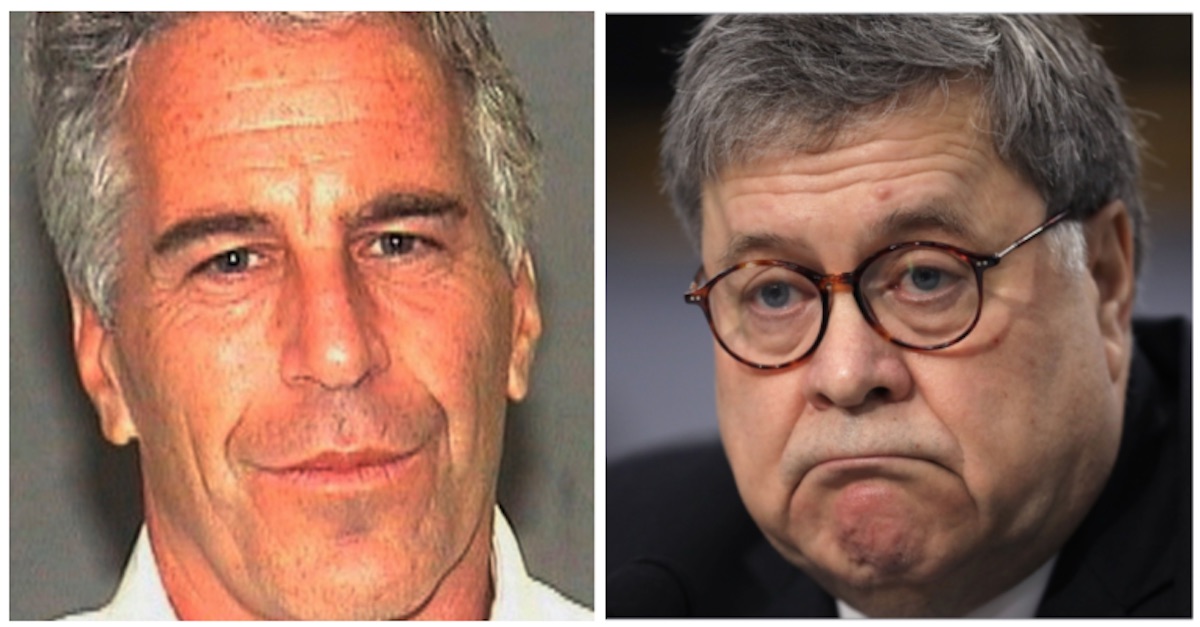 UPDATE, July, 9: Barr clarifies that he is recused from the review of Epstein’s Florida case, not the Southern District of New York case.

JUST IN: Attorney General William Barr will not recuse himself from Epstein case in SDNY, after consulting with career ethics officials. But he remains recused from the review of the previous Epstein case in Florida “due to his prior association with Kirkland Ellis.” @CBSNews

When U.S. Attorney General William Barr went through the confirmation hearing process back in January, Sen. Ben Sasse (R-Nebraska) asked Barr if he would commit to launching a “full and thorough investigation” into the way the Department of Justice handled the Jeffrey Epstein case, namely how Epstein’s law-breaking sweetheart deal came to be struck and kept under lock and key.

Barr offered an interesting response to the question: “Senator, I have to recuse myself from Kirkland & Ellis matters, I am told. And I think Kirkland & Ellis was maybe involved in that case, so I need to sort out exactly what my role can be. I will say that if I’m confirmed I’ll make sure your questions are answered on this case.”

Barr was right that Kirkland & Ellis was involved in the case. The firm’s senior partner, Jay Lefkowitz, was among high-profile lawyers like Alan Dershowitz and Ken Starr who represented Epstein. The so-called all star cast of lawyers, with the apparent blessing of former federal prosecutor Alexander Acosta (President Donald Trump‘s current Labor Secretary), secured a plea agreement for Epstein that got federal sex trafficking charges taken off the table, and then some.

Back in 2008, Epstein pleaded guilty to state solicitation of prostitution in Florida, even though he was accused of sexually abusing dozens of underage girls. What’s more, Epstein only had to serve 13 months in county jail and register as a sex offender. That wasn’t all:

He was granted work release to go to a “comfortable office” for 12 hours a day, six days a week, despite the fact that the Palm Beach Sheriff’s Department prohibited work release for sex offenders.

Epstein’s deal, called a “non-prosecution agreement,” granted immunity to “any potential co-conspirators,” meaning that if any of Epstein’s powerful friends were involved in his crimes, they would face no consequences. And Acosta agreed that the deal would be kept secret from the victims, preventing them from showing up in court to try to challenge it.

In short, federal prosecutors, under the leadership of Acosta, then the U.S. Attorney for the Southern District of Florida, quietly entered into a secretive non-prosecution agreement that ensured that Epstein and his co-conspirators would not be prosecuted federally in exchange for Epstein’s guilty plea to much less serious state prostitution charges. Epstein admitted to paying for nude massages that occasionally turned sexual.

On Monday, Epstein was indicted on federal conspiracy to commit sex trafficking and sex trafficking charges in the Southern District of New York. Epstein was accused of sexually exploiting and abusing dozens of minor girls–both at his Palm Beach, Florida and Manhattan, New York homes–from around 2002 to 2005. SDNY prosecutors alleged that Epstein “worked and conspired with others, including employees and associates who facilitated his conduct.”

Also on Monday, AG Barr said he was recused from getting involved in the Epstein case, repeating what he said during confirmation hearings.

“I’m recused from that matter because one of the law firms that represented Epstein long ago was a firm that I subsequently joined for a period of time,” Barr told reporters.

AG William Barr: "I'm recused from that matter because one of the law firms that represented Epstein long ago was a firm that I subsequently joined for a period of time." pic.twitter.com/hdwqgOlrWD

The aforementioned Alexander Acosta and Deputy Attorney General Jeffrey Rosen have also worked at Kirkland & Ellis in the past.

Quite a bit of attention has otherwise been devoted on social media to a Barr Family-Epstein connection.

Jeffrey Epstein, who didn’t go to college, is a billionaire, who started off work at the $$$ Dalton School, teaching teenagers, when he was inexplicably hired without a college degree by US AG BILL BARR’s FATHER, then the head of school.

Yes, AG Barr oversees the US Attorney’s Office in NY, so it’s possible he could attempt to interfere, though it would be obvious. Also, many years ago, Barr’s father hired Epstein to teach at the private Dalton school, with no college degree. So there’s that…

Former FBI Assistant Director for counterintelligence Frank Figliuzzi was one of many to point out that Barr’s father, Donald Barr, hired Esptein decades ago to teach teens at the prestigious Dalton School. Donald Barr was the headmaster at the school from 1964-1974. Epstein, a college dropout, taught calculus and physics at the elite Manhattan school from 1973-1975.

New York University Law School Professor and legal ethics expert Stephen Gillers told Law&Crime that Barr would have had to recuse himself because of this if there was “a reasonable possibility that the prosecution of Epstein could lead to disclosures that would harm Donald Barr’s reputation.”

“The fact that Epstein was a college dropout is not by itself important here,” Gillers said. “Some college dropouts have a lot to teach — Bill Gates? Mark Zuckerberg? What’s important is whether the case might produce information that does damage to Donald’s reputation, damage that Bill Barr would wish to suppress. If there is a reasonable possibility that it might, Bill Barr is recused.”

The United States Court of Appeals for the Second Circuit on last week ordered the unsealing of the summary judgement record of a civil lawsuit that was filed against a woman who was accused of running a sex trafficking ring with Esptein. The impact of the news was described as “potentially explosive,” given that the documents could shine sunlight on allegations against Epstein and his former partner and alleged madam, Ghislaine Maxwell, plus unnamed individuals who argued against the unsealing of documents.

Virginia Giuffre (formerly Roberts) claimed that Maxwell recruited her to be a “masseuse” for Epstein when she worked at Mar-a-Lago, the Florida club owned by President Donald Trump. As Courthouse News noted before, former President Bill Clinton “hitched multiple rides on Epstein’s jet to his private island,” while President Trump “once called Epstein a ‘friend.’”

“I’ve known Jeff for 15 years. Terrific guy. He’s a lot of fun to be with,” Trump said of Epstein in a 2002 interview. “It is even said that he likes beautiful women as much as I do, and many of them are on the younger side. No doubt about it – Jeffrey enjoys his social life.”

Giuffre alleged that from 1999 to 2002, she was used to perform sexual acts. She said she was just 16 when this began and claimed that other underage girls were used as well. According to the Miami Herald, Maxwell settled the case in 2017 for millions of dollars.

A John Doe once argued that an unsealing of documents related to to this case could “substantially infringe the privacy and reputational interests of many third persons … who have never been charged with a crime, have never been subject to civil proceedings, and have never been publicly identified by Giuffre.”

The appellate court noted at length the background of this case, including that allegations were made against “several other” unnamed “prominent individuals” — even “world leaders.”