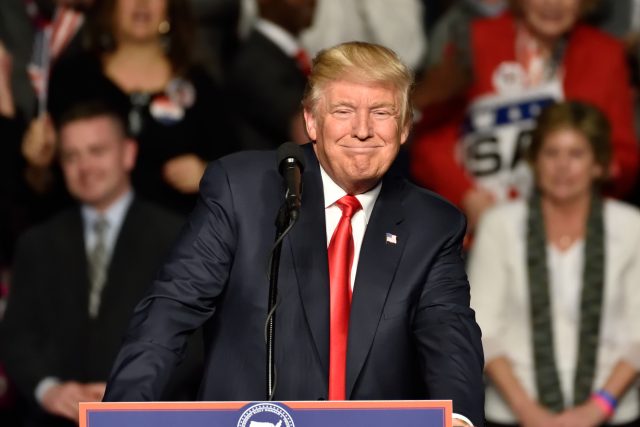 Immediately after President Donald Trump posted what appears to be a totally unhinged tweet calling out television host Mika Brzezinski for an alleged facelift, calls have already begun for his immediate removal using the 25th Amendment. The Constitutional provision, which has never been used, can be invoked when a president has been found to be “unable to discharge the powers and duties of his office.”

In any other presidency this would be cause to trigger the 25th amendment. But in 2017, this is normal.

It’s the answer to a future Jeopardy question. “What were the final Tweets that forced the GOP to start Trump’s 25th Amendment proceedings? https://t.co/mSOD9krDes

The scary thing about any 25th Amendment scenario: VP is almost as unstable. Anybody who believes in gay conversion therapy is a psychopath. https://t.co/8yn1wWXOye

Keith Olbermann tweeted out that his “irresponsible” speech is destroying the country, and that the 25th amendment should be invoked.

Then help invoke Section 4 of the 25th Amendment and remove Trump. Do it today. His irresponsible speech is destroying this country. https://t.co/ptkz78eBOh

As we previously reported, the process for removing an incapacitated president involuntarily has never been tested and it would likely be incredibly difficult. But here’s what would happen if Section 4 of the 25th Amendment was invoked, in part:

In order for the vice president (Pence) to continue as the “Acting President,” the Senate and the House would have to determine by a 2/3 vote that President Trump is unable to “discharge the duties of his office.”

Could it happen? Most legal experts think it would be nearly impossible, especially given the current make-up of Congress.

As lawyers, the question of incapacity is dealt with all the time in the law, especially in cases of the infirm or elderly, rape cases or statutes of limitations, criminal culpability or civil liability. Due equally to the respect for the individual and regard for democracy, we do not allow the state, or anyone else, to uniformly call some incapacitated without clear, constricting standards. This requires the literal inability to function — coma status, or its equivalent, generally. A mental illness so severe it deprives a person from being able to feed themselves, house themselves, etc. There must be a complete inability to provide for the most basic needs of themselves. The criminal law provides further detailed definitions, such as when a defendant is competent to stand trial. To be incompetent or incapacitated, as any lawyer knows, compels a very high standard of proof of completely inability to function.

But, not everyone agrees. Harvard law professor Laurence Tribe told The New Yorker that the standard for removal is not “a medical or otherwise technical one but is one resting on a commonsense understanding of what it means for a President to be ‘unable to discharge the powers and duties of his office’—an inability that can obviously be manifested by gross and pathological inattention or indifference to, or failure to understand, the limits of those powers or the mandatory nature of those duties.”