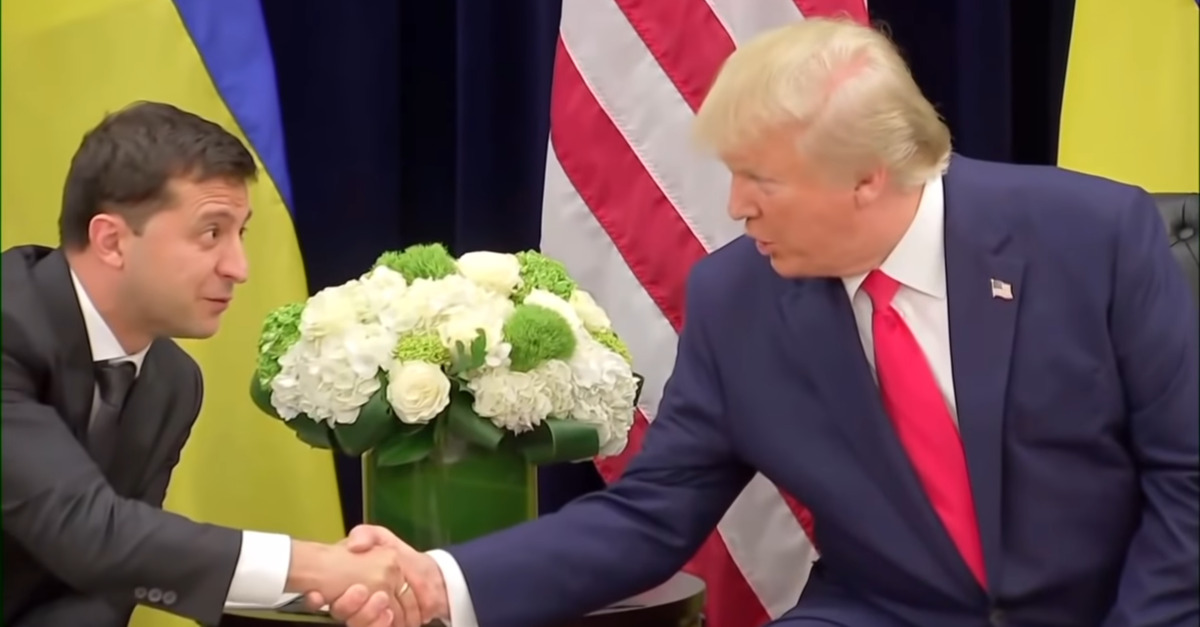 This isn’t the way the story’s supposed to go for President Donald Trump. U.S. embassy staff have pushed back against the president’s oft-repeated claim that his Ukrainian counterpart was not pressured into investigating potential 2020 political rival Joe Biden and his son, Hunter Biden‘s work in the former Soviet country.

According to the Associated Press, at least two members of the U.S. Embassy in Kiev claim “Ukrainian President Volodymyr Zelensky was feeling pressure from the Trump administration.”

This pressure was reportedly being exerted on Zelensky well before the infamous July 25 phone call in which Trump allegedly conditioned the provision of further U.S. aid on an investigation–and an official announcement of said investigation–into the Bidens.

Trump’s defense of that phone call has been the consistent refrain of “no pressure”–a claim rubbished by several public impeachment witnesses. The Monday revelation could mean that additional witnesses may soon be called by congressional impeachment investigators to bolster claims of Trump’s alleged bribery attempt.

Per the AP report:

In early May, staff at the U.S. Embassy in Kyiv, including then-Ambassador , were briefed on a meeting Zelenskiy held in which he sought advice on how to navigate the difficult position he was in, according to two people with knowledge of the briefings.

[Zelensky] was concerned that Trump and associates were pressing him to take action that could affect the 2020 U.S. presidential race, the people said. They spoke only on condition of anonymity because of the diplomatic and political sensitivity of the issue.

Zelensky has publicly stated he never felt pressured by Trump–including at a September press conference with the 45th president.

“You heard that we had, I think, good phone call,” Zelensky said outside the United Nations General Assembly in New York. “It was normal. We spoke about many things. And I–so I think, and you read it, that nobody pushed–pushed me.”

Trump pounced to interject: “In other words, no pressure.”

Those denials, however, appear to have been completely contrived. And the AP‘s anonymous sources say there are receipts.

Internal State Department documents allegedly note that Zelensky not only lied during that press conference about feeling pressured by Trump, but later made pains to cover up his administration’s previous discomfort at being asked to look into Trump’s political enemies.

On May 7, Zelensky assembled a small group of his top advisers in Kiev. The public excuse for that meeting–held two weeks before he was inaugurated; he was elected April 21–was about the Ukraine’s energy issues. In reality, the meeting was consumed by talk about how to deal with pressure from the White House and shadow diplomat Rudy Giuliani, who is also Trump’s personal attorney.

“The officials said in their notes circulated internally at the State Department that Zelensky tried to mask the real purpose of the May 7 meeting — which was to talk about political problems with the White House — by saying it was about energy, the two people said,” according to the AP‘s exclusive report.

Amos Hochstein is an American businessman who was tapped by the Obama administration for diplomatic roles centered around natural resource extraction. He currently sits on the supervisory board of Naftograz, Ukraine’s national oil and gas company.

A separate AP report from October notes Hochstein was present at that May 7 meeting–which also included Zelensky aides Andriy Yermak and Andriy Bogdan as well as Naftograz C.E.O. Andriy Kobolyev. New details have since emerged about what Hochstein knew and who he shared that information with.

“After the meeting with Zelensky, Hochstein separately briefed two U.S. Embassy officials, Suriya Jayanti and Joseph Pennington, about Zelensky’s concerns, said the two people who spoke to the AP,” the new report notes. “Jayanti and Pennington took notes on the meeting, the people said.”

After that, it was back to Washington, D.C., where Hochstein apprised Yovanovitch of what was discussed in that meeting.

As Law&Crime previously reported, Yovanovitch was then in the midst of a large scale smear campaign being waged by Giuliani and then-Ukrainian prosecutor general Yuriy Lutsenko in service of Lutsenko’s own political ambitions and for the material benefit of indicted Floridian hatchet-men Lev Parnas and Igor Fruman.

Yovanovitch’s recently-released deposition testimony before the House Intelligence Committee outlines the lengths to which Giuliani and others in the Trump administration went to have her removed:

Yovanovitch refused that flight but was eventually recalled by Trump just a few days later.