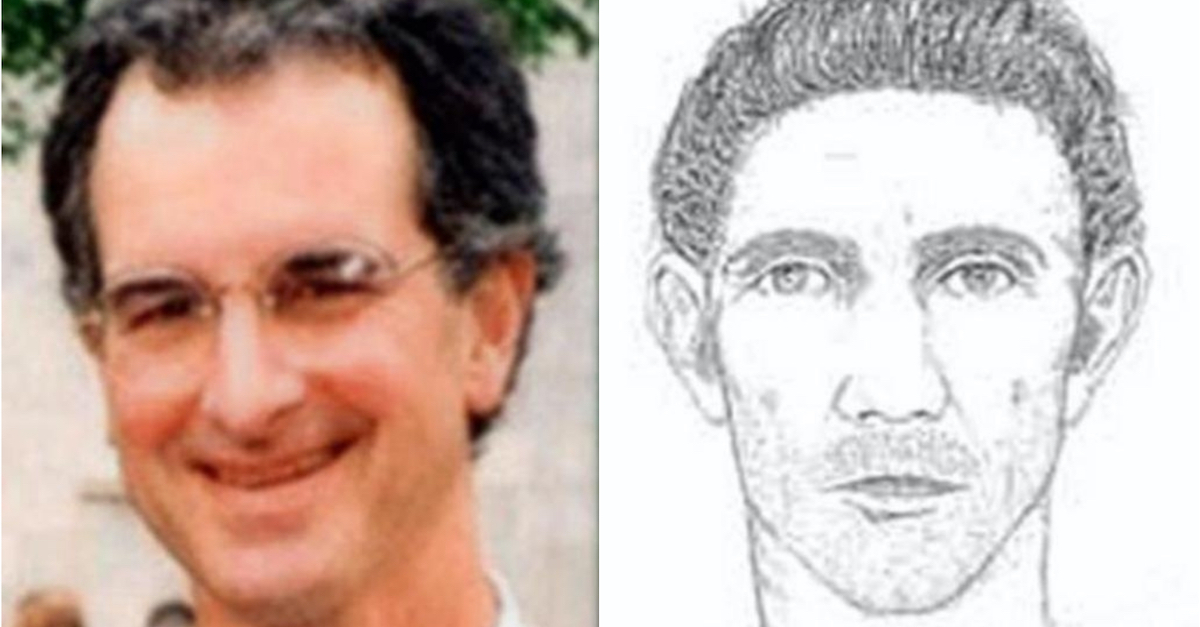 Some two decades later, authorities redouble efforts to solve the case of slain Assistant U.S. Thomas Wales. The sketch of his suspected shooter is on the right.

Two decades after a federal prosecutor was shot and slain inside his home, the Department of Justice has doubled the $1 million reward the agency offered for information that will bring his suspected killer to justice. Together with a private donation, the total reward money now stands at $2.5 million.

Shot to death in his Seattle home with a Makarov pistol on Oct. 11, 2001, the late Assistant U.S. Attorney Thomas Wales specialized in fraud prosecutions for the Western District of Washington, where he had worked primarily on white collar cases for 18 years.

Authorities say that the shooter stood in his backyard and fired several shots through a glass, basement window while he typed on a computer. One male suspect reportedly fled the scene, and Wales died at a hospital the next day at the age of 49.

The father of two was a graduate of Harvard University and Hofstra Law School in the 70s.

According to the Seattle Times, the FBI may already have turned a corner. A source told the paper that the suspected killer “enlisted the help of a notorious drug cartel.” If proven, the link would reportedly scuttle the alibi of the FBI’s primary suspect: a commercial airline pilot said to have held a grudge against Wales.

“If the killing was related to his job, Wales would be the first line-of-duty murder of a federal prosecutor in U.S. history,” the paper reported.

On Monday, Deputy Attorney General Lisa Monaco announced that the Justice Department increased the reward for information leading to the killer to $2 million.

“The Department of Justice will never forget Tom’s contributions to the department and the cause of justice, nor will we forget the tragedy of his death,” Monaco said in a statement. “Although two decades have passed, the Department of Justice remains committed to this investigation. Somebody knows something about this murder, and we want to do everything we can to encourage them to come forward now.”

The National Association of Former U.S. Attorneys contributed an additional $500,000.

In addition, federal authorities announced plans to team up with the Seattle Prosecutor Murder (SEPROM) Task Force, which will devote personnel with expertise in homicide investigations.

“The addition of these resources, including attorneys and investigators from the U.S. Attorney’s Office for the Western District of Washington and FBI, will put the department in the strongest possible position to solve Tom’s murder,” Monaco added.

Forensic experts determined that the murder weapon was a Makarov semi-automatic handgun fitted with an aftermarket barrel.

“Soviet Bloc countries manufactured the Makarov through approximately 1968,” the FBI wrote in an informational flier. “The aftermarket barrels are stainless steel, rifled with six lands and grooves and a left twist. Because there are a limited number of aftermarket barrels that were sold in the United States, investigators have been working to identify and test fire as many as possible.”

Prosecutors say they hope that “leveraging emerging and evolving technologies” can help turn a corner in their investigation.

Authorities are also turning to the public for assistance. The FBI encourages anyone with information to assist them and emphasizes that the public can leave tips confidentially by phone at (206) 622-0460 or by e-mail at [email protected] Tipsters can also reach the relevant FBI office via snail mail at 1110 Third Avenue, Seattle, WA, 98101.