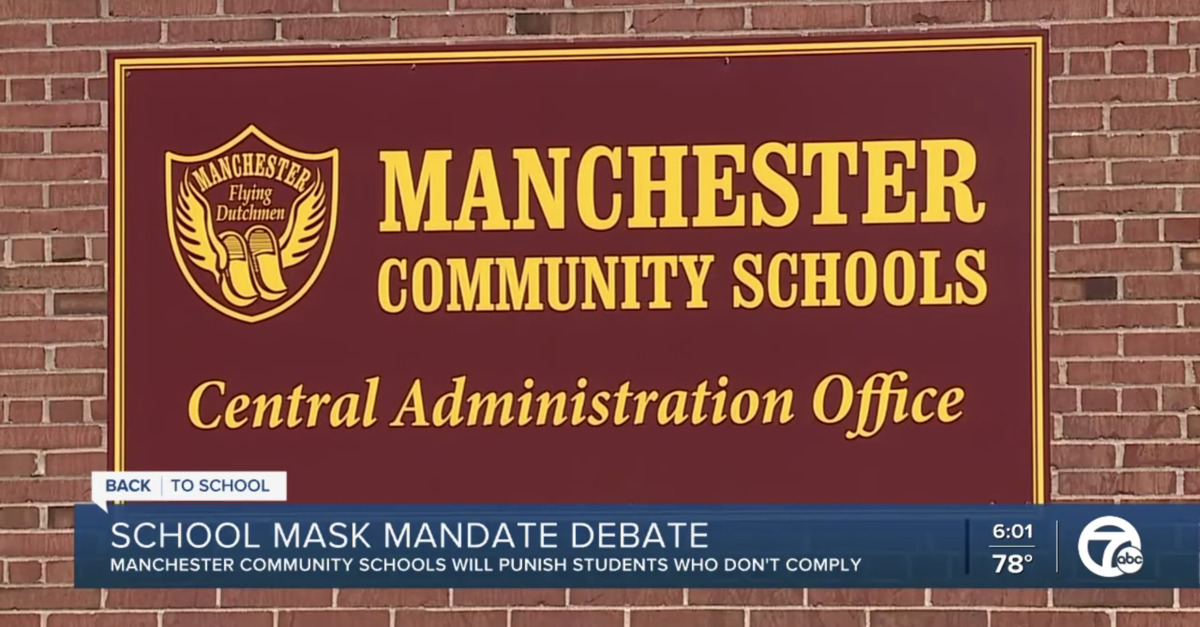 A Michigan parent is suing a school district in the Wolverine State on behalf of his daughter for enforcing a county-wide mask mandate that applies to K-12 schools, arguing the mandate violates his daughter’s constitutional rights.

“The plaintiff has been subjected to discipline including detention and suspension,” the lawsuit says, alleging students “are being controlled by a fear of consequences for the slightest noncompliance.”

James Stewart filed the 23-page lawsuit on behalf of his daughter Morrah Stewart in the U.S. District Court for the Eastern District of Michigan on Monday. The complaint alleges that Washtenaw County’s mask mandate–generally enforced by Manchester Community Schools and specifically enforced by Manchester High School–violates procedural and substantive Due Process rights and is also in violation of the Equal Protection Clause of the U.S. Constitution.

According to the lawsuit, the school’s actions constitute “extreme and dangerous conduct” that might “interfere with the students’ futures.”

“Mask wearing students were treated differently than students who were not wearing masks in that [Morrah] and others were segregated to a different part of the building, teachers called the students names, including ‘anti-maskers,’ and they were subjected to discipline for choosing not to wear a mask,” the lawsuit’s section dealing with the student’s 14th Amendment claim alleges.

The filing also alleges that Stewart has been subjected to intentional infliction of emotional distress, a tort for which the family is seeking compensatory and exemplary money damages.

According to the filing, Stewart and “several other” Manchester High School students “opted not to wear a facial covering and as a result of not wearing a facial covering were segregated and brought into the library,” where a school officer allegedly informed them that he would be putting the anti-mask students’ names into a computer and that after the fact their names would be “in the computer forever.”

In response to that claim, the lawsuit invokes the specter of a “permanent record” and asks a judge that any and all such disciplinary actions be “forever removed” from said record. Though generally seen as a myth in its fabled form—there is no paper trail of a child’s every alleged infraction that lasts forever—experts note that the repositories of information kept on students vary by state. Some can be extensive.

As a result of their decisions not to wear masks, the students are complaining that they have been called “anti-maskers” by teachers and that a teacher “walked out of the classroom” when the students refused to wear masks.

The lawsuit claims the anti-mask students, when forced into compliance with the mandate, have been denied “the ability to pursue an education without being subjected to health risks that are not offset by any scientifically provable benefits” and the “right to a public education and to an education in a sage and healthy environment.”

Here, the lawsuit inverts actual public health considerations into a false claim that by being forced to wear masks, Morrah Stewart “suffer[ed] an overall possible simultaneous drop in oxygen saturation of the blood.” This is a prevalent myth often spread by COVID-19 skeptics on social media.

According to MLive.com, the lawsuit stems from an anti-mask protest by the students that occurred one day in September.

Law&Crime reached out to Manchester Community Schools but no response was immediately forthcoming at the time of publication.

Read the full original petition below: