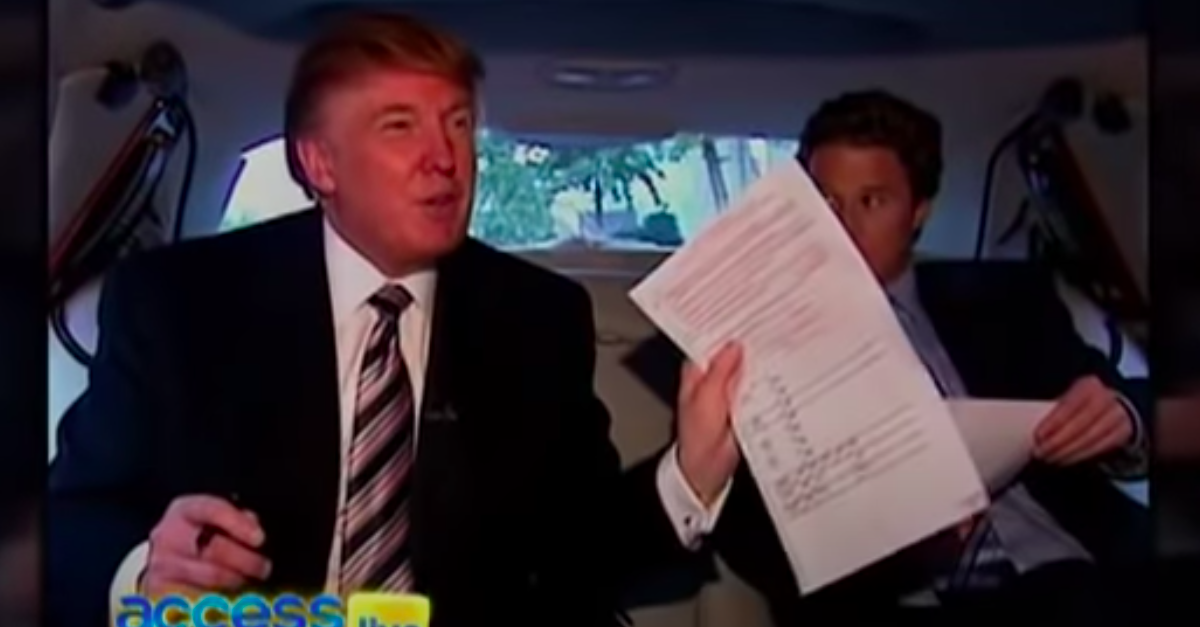 Donald Trump filling out his provisional ballot before voting by mail in the 2004 presidential election.

Over the last several months, President Donald Trump has repeatedly demonized attempts to expand access to voting by mail and erroneously claimed that mail-in ballots would lead to “the most corrupt election” in U.S. history. Just last week, the president told Fox News’s Chris Wallace that he may not accept the results of the 2020 election because he thinks “mail-in voting is going to rig the election.” But a video of Trump from 2004 appears to show the future president running around New York City and attempting, but struggling, to cast his vote on election day. Eventually, Trump decided to cast a provisional ballot by mail.

The video, which is gaining new traction due the president’s comments on vote-by-mail proposals, was originally recorded and disseminated by NBC’s Access Hollywood.  It features then-correspondent/anchor Billy Bush (prior to the infamous “grab ‘em” tape) in a segment chronicling Trump, then the host of NBC’s reality television series “The Apprentice,” as he attempted to vote in the presidential contest between George W. Bush and John Kerry.

Assuming the video is an accurate portrayal of what really happened, the Trump excursion went off the rails almost immediately as the then-businessman turned up at the wrong polling location — over and over again. After a poll worker at the first location told Trump he was in the wrong place, Trump told the worker to do him a favor and “double check” the registry. At the next location, a visibly annoyed Trump said, “they don’t have it here either, can you believe it.”

After being denied by a third Manhattan polling location, Trump tells a poll worker who appears to be in charge of the station, “you didn’t do right by me.”

It’s after his third failed attempt at voting in person that Trump looks at the camera and declares, “Well, I’m gonna fill out the absentee ballot.”

The segment then cuts to Trump, sitting in his limousine and flanked by Bush, filling out his provisional absentee ballot.

“And I’ve just voted,” Trump says as he holds the mail-in ballot up to the camera. “At least you can say, ‘The Trumpster doesn’t give up,’” he added.

Bush told Access Hollywood that the reason Trump was unable to vote was because of a mix-up over a change of address form submitted by the Trump’s son Donald Trump, Jr.

Trump has previously tried to draw a false distinction between mail-in voting, which he claims will lead to rampant fraud, and absentee ballots, which he claims require voters to go through a “very strict process.”

….Absentee Ballots are fine because you have to go through a precise process to get your voting privilege. Not so with Mail-Ins. Rigged Election!!! 20% fraudulent ballots?

“Mail-In Ballot fraud found in many elections. People are just now seeing how bad, dishonest and slow it is. Election results could be delayed for months. No more big election night answers? 1% not even counted in 2016. Ridiculous!,” Trump tweeted earlier this month.

“Just a formula for RIGGING an Election. Absentee Ballots are fine because you have to go through a precise process to get your voting privilege. Not so with Mail-Ins. Rigged Election!!! 20% fraudulent ballots?”

While election experts have repeatedly debunked the notion that there is any substantive distinction between the two methods of voting, this video is getting new attention as the president attempts to draw future distinctions in favor of absentee-only mail-in votes.