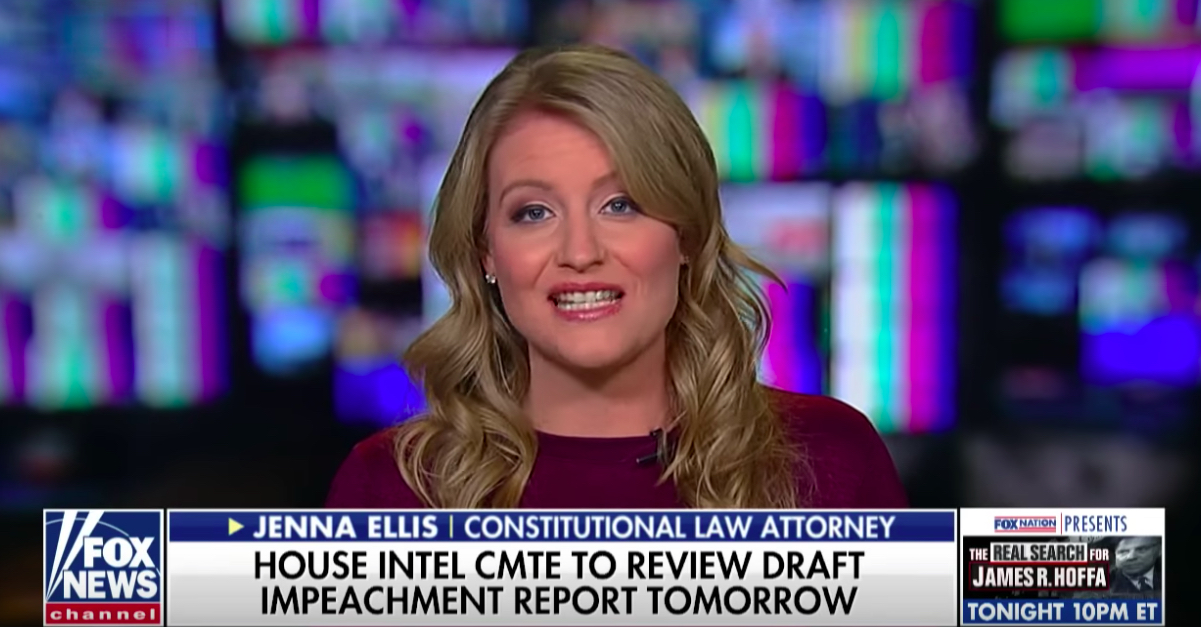 President Donald Trump last month elevated attorney and evangelical advocate Jenna Ellis to dual roles as a senior legal advisor to the president and the Trump 2020 campaign. In her occasional Fox News appearances, Washington Examiner columns and elsewhere, Ellis has reliably provided Trump-esque responses to impeachment, saying that the president has been maligned by Democrats who are simply wrong, malicious, crazy, America-hating socialists. Ellis’s other past writings are now garnering more attention.

In her 2015 book, The Legal Basis for a Moral Constitution, Ellis argued that progressive judicial philosophy created a “culture that lacks objective morality and embraces secular ideas; she implored Americans to “get back to being a biblically moral, upright society,” the Daily Beast reported on Friday.

Ellis also lamented the Supreme Court’s marriage equality decision, writing that the ruling “told the LGBT community that their homosexual lifestyle was not just legal privately, but morally validated openly through government recognition and social celebration and therefore equally as valued as heterosexual unions.”

Just two days after a 2016 mass shooting left 49 dead and 53 injured at Pulse, a gay nightclub in Orlando, Ellis wrote a blog post, Orlando Aftermath – Two Wrongs Do Not Make an LGBT Right. The first line of the post: “I’m disappointed conservatives are acquiescing to the LGBT agenda.”

Ellis called the shooting a “tragedy,” but criticized conservatives for “embracing and advocating for gay rights.” In particular, she said that Jim Hoft, the founder of right-wing website Gateway Pundit, was wrong to write on Breitbart, “After the Pulse Club Massacre, It’s Time for Gays to Come Home to Republican Party.”

“He says he is now saving his country from ‘the socialist onslaught,’ and then begins to describe how conservatism is the only hope for so-called gay rights,” Ellis wrote. “What?”

“Constitutional conservatism expressly recognizes through the Declaration of Independence that the only Rights that exist come from God and are therefore dependent on consistency with God’s law. Yet this gay activist is very slyly parlaying his political conservatism into a social referendum completely inconsistent with conservatism,” she added.

“I didn’t see the Left suddenly become Christian activists after Charleston and try to welcome Christians or even stand up for what actually is a fundamental Right—free exercise of religion—specifically enumerated in the First Amendment, thereby protected against federal government infringement,” Ellis wrote.

Roof is an avowed white supremacist who confessed to investigators that he specifically targeted the congregation because they were black, not because they were Christians. In a confession, Roof told investigators “Somebody had to do it” because “black people are killing white people everyday […] What I did is so minuscule compared to what they do to white people every day.”

Trump reportedly began seeking Ellis’s legal counsel regarding his impeachment after seeing her defend him on cable news shows. She even counseled the president on drafting his wild anti-impeachment missive to Speaker of the House Nancy Pelosi.

“I reviewed it last night but it’s 100% him. It’s perfect,” Ellis told PJ Media after the letter’s release. “It’s everything Americans are feeling and thinking about this unconstitutional impeachment scam. It’s so important, as the president said, to get the truth on the record since he was denied meaningful input and due process in the House.”