The business owned by President Donald Trump and his family paid several illegal bribes to New York City authorities during the ’80s and ’90s, according to former officials there and one person who formerly worked for the Trump Organization.

One of the former tax-assessors who spoke on the record was Frank Valvo. He was indicted for accepting such bribes in 2002. Valvo ultimately served seven and a half years in prison over his role in the intricate and far-reaching bribery scheme–after a long stint working in the tax-assessor’s office for 27 years.

The New York Times reported on the fall-out from that scandal:

Despite repeated warnings and investigations, the city seemed unable to root out the corrupt assessors. A newly disclosed letter suggests that in 1993 the city was asked to investigate whether not only tax assessors and tax consultants, but also prominent tax lawyers and — by extension — owners may have been knowing participants in the scandal. Mayor Michael R. Bloomberg has called it ”the largest and most financially damaging corruption scheme ever conducted within city government.”

Valvo pleaded guilty in September 2002 and testified that a tax consultant named Albert Schussler was one of the brains behind the whole operation–who allegedly enacted his plans by way of a series of middle men who helped “lower tax assessments, and thus tax bills, for owners of office towers, hotels, apartment houses and parking lots in Manhattan.”

Schussler–who was also charged in the scandal–was set to divulge additional information about the scheme, but he died the night before he was scheduled to speak with prosecutors. As a result, the property owners involved were never themselves prosecuted over the scandal.

“You’d love to follow the rainbow to the very end and get every person along the way who has been committing crimes, but unfortunately it’s not possible,” Sharon McCarthy, the assistant U.S. attorney in charge of the case told researchers in 2014. “The person who dealt directly with the property owners is Albert Schussler, and he passed away, so we lost the ability to go after anyone else.”

Over the decades-long corruption ring, many of those middle men allegedly received Trump Organization payments.

Valvo told ProPublica how his office felt at the time:

In 2007, Trump himself was questioned under oath about another alleged principal in the bribery scandal–a self-inflicted wound due to a lawsuit the future president filed against journalist Timothy O’Brien. O’Brien most recently served as an advisor to Bloomberg’s campaign. Trump initially denied any knowledge of Schussler associate and alleged middleman Thomas McArdle but later amended his knowledge substantially–relaying basic facts about his role in the Manhattan property scene. Trump, however, ultimately denied ever having worked with him.

“I don’t remember ever having used him,” he said later on. “But he was used by many major real estate companies in New York.”

The Trump Organization issued a lengthy statement in response to ProPublica’s story expressing a decided sense of dismay.

That statement from Alan Garten reads, in full: 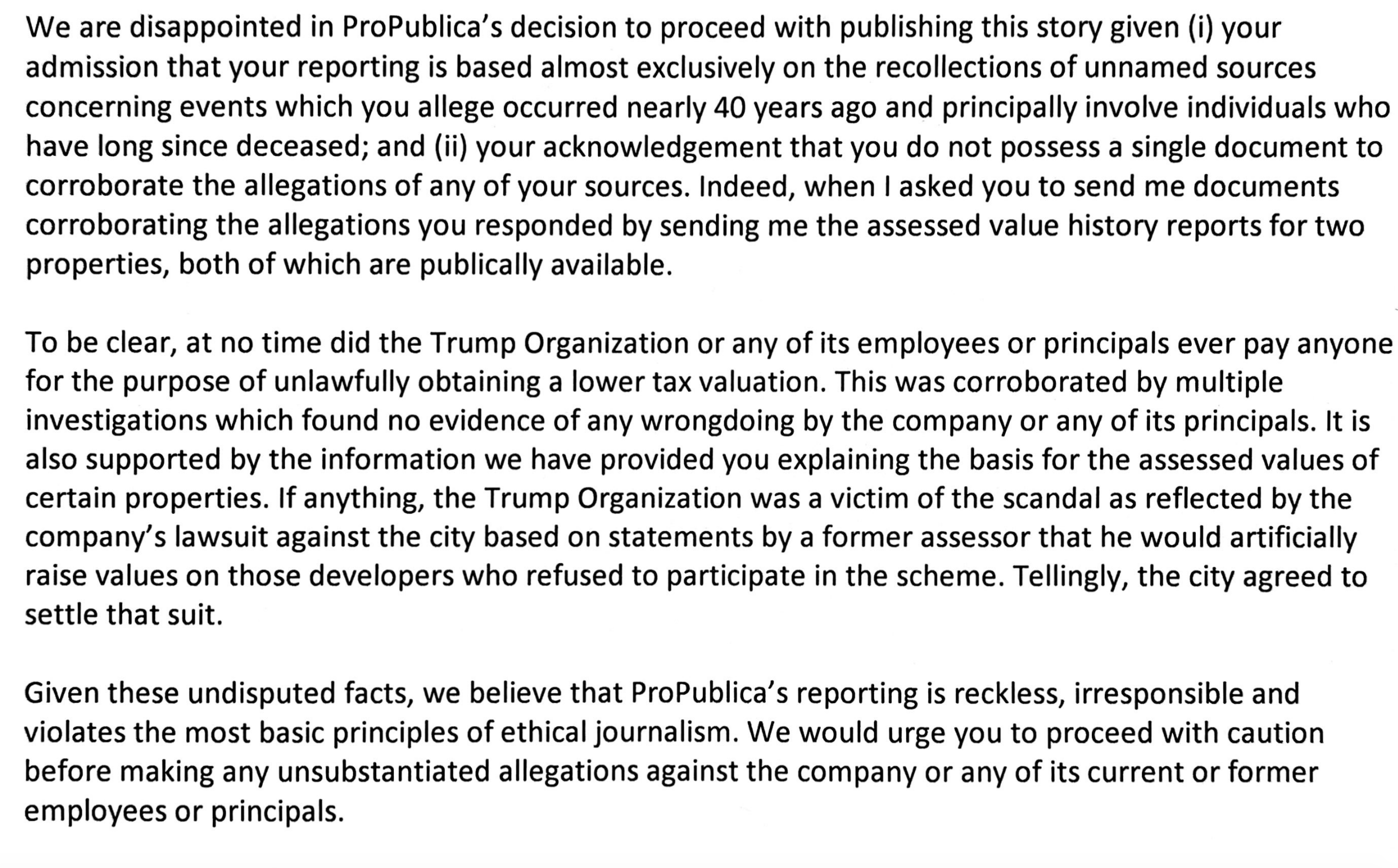 ProPublica included the following editor’s note with the above statement they received: “The Trump Organization mischaracterized several statements made by ProPublica’s reporter.”

Additionally the aforementioned 2002 Times article has a notable and interesting reference to the future president himself.

“Donald J. Trump…recently sued the city claiming that he had paid higher property taxes because the other owners’ taxes were lowered in the scheme,” the story notes.