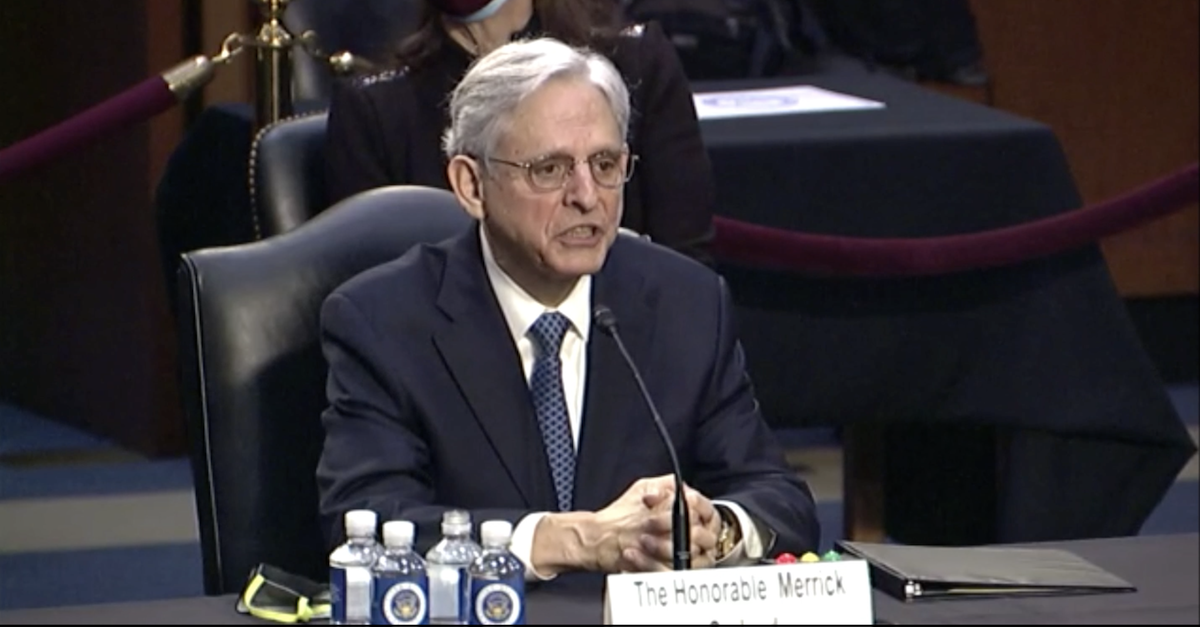 Positioned by President Joe Biden as an attorney general nominee whose bipartisan bona fides can restore public confidence in the Department of Justice, Judge Merrick Garland spent most of the first day of his confirmation hearing affirming that he will repair the wall between the prosecutor’s office and the White House.

“Too many in the Department’s senior roles cast aside the rule of law,” Judiciary Committee Chairman Dick Durbin (D-Ill.) noted. “Trump appointees in the Department sidelined career public servants—from line attorneys to FBI agents—limiting their roles, disregarding their nonpartisan input, overriding their professional judgments, and falsely accusing them of being members of the ‘deep state.’”

Under the prior administration, multiple U.S. Attorneys claimed interference by the Trump White House before or after being fired or pressured to resign. Republicans used the D.C. Circuit judge’s commitment to restoring independence to press him to continue the Justice Department’s agenda under former President Donald Trump: discrediting the Russia investigation through John Durham’s probe and looking into Hunter Biden and Ukraine.

First Takeaway: Judge Garland Fortifies the Wall Between the AG and the White House

Sen. Chuck Grassley, the Committee’s top Republican, put Garland’s commitment to the separation between the White House and the Justice Department to the test by asking him whether he ever spoke about Hunter Biden with the sitting president.

Garland’s response left no equivocation: “The answer to your question is, ‘No.'”

Before that declarative sentence, Garland noted that President Biden made multiple public statements affirming his White House would not get involved in such matters.

“That was the reason that I was willing to take on this job,” the judge said.

Republicans were less satisfied with Garland’s response to whether he would allow Durham to see his probe into the Russia investigation to its conclusion. The judge emphasized that he had no reason to see why that would not be the case, but he would not prematurely commit to that without making an informed decision from inside the Justice Department.

GOP senators took turns expressing disappointment with that answer, including Texas Sen. Ted Cruz, who apparently saw no inconsistency between his high-minded call for political neutrality in the attorney general’s office a demand that Garland commit in advance to investigating New York’s Democratic Gov. Andrew Cuomo. Garland did not take that bait.

Much of Judge Garland’s opening statement revolved around his leadership of the prosecutorial team that convicted Timothy McVeigh and his co-conspirators behind the Oklahoma City bombing in 1995, an aspect of his resume that won applause and respect from both sides of the aisle.

Sen. Durbin began the question-and-answer session by comparing that white supremacist domestic terrorist attack and the Jan. 6th insurrection, a comparison that Garland welcomed and even extended.

“Mr. Chairman, I certainly agree that we are facing a more dangerous period than we faced in Oklahoma City,” Garland told the committee.

Quoting FBI Director Christopher Wray, Garland noted that his bureau has called the threat of domestic terrorism and white supremacist extremists the “number one concern.”

During the morning session, Garland’s handling of the Oklahoma City case won him bipartisan admiration, including from Grassley, but the parties jockeyed over its legacy: particularly on the death penalty.

Some 25 years after the bombing, Garland expressed “great pause about the death penalty” during questioning by Sen. Patrick Leahy, elaborating to the Vermont Democrat about his concerns about the large number of exonerations and the arbitrary application of the ultimate sentence.

“I supported the death penalty at that time for McVeigh, in that individual case,” Garland responded to that example. “I don’t have any regret, but I have developed concerns about the death penalty in the 20-some years since then. Some of the sources of my concern are exonerations of people who have been convicted, the sort of arbitrariness and randomness of its application because of how seldom it’s applied, and because of its disparate impact on Black Americans and members of other communities of color.”

Senator Cotton pressed the judge further by asking if he would support execution in the case of Charleston shooter Dylan Roof or one of McVeigh’s followers, should a copycat bombing arise.

Garland responded that each of these cases would accord with the Biden administration’s policy, and he would honor a moratorium if one is implemented.

A former prosecutor, Sen. Sheldon Whitehouse (D-R.I.) used some of the lingo of his former trade in asking Garland about his willingness to look “upstream” for people behind the U.S. Capitol insurrection.

“You will not rule out investigation of funders, organizers, ringleaders and aiders and abetters who were not present in the Capitol on Jan. 6th?” Whitehouse asked.

Garland committed to not putting boundaries on his investigation.

“We begin with the people on the ground and we work our way up to people involved and further involved,” Garland said. “We will pursue these leads wherever they take us. That’s the job of a prosecution.”

Neither of the men mentioned the name “Trump,” but the question went further than the 45th president. In some cases, Democratic Congress members have accused Republican colleagues like Rep. Lauren Boebert of providing reconnaissance tours to rioters before the siege, allegations that they have denied.

Sen. Ron Wyden, the incoming chair of the Finance Committee, asked the Internal Revenue Service to investigate what roll charities may have played in the insurrection, and Trump’s impeachment manager Stacey Plaskett, a Democratic delegate to the House representing the Virgin Islands, focused on the role that Women for America First played in organizing the march to the Capitol.

Politics and policies aside, the Fourth Estate would largely welcome Garland’s leadership of the Justice Department because of his long-established record of transparency in Freedom of Information Act requests and access to the courts.

“Judge Garland, who served as chief judge from 2013-2020, has taken strong stands on First Amendment issues in two significant dissents during his long service on the appellate court,” the Reporters Committee for Freedom of the Press found in a review of his rulings. “In one case, he wrote a dissent in support of a robust reporter’s privilege. And in another case, in which he joined a dissent, he supported First Amendment protections for the publication of lawfully obtained information.”

“I would expect to re-up those guidelines,” Garland noted. “I don’t believe that they have been rescinded in any way.”

Klobuchar agreed, before adding that she could not get a straight answer from former Attorney General Bill Barr on the same question.

After former President Barack Obama nominated Garland for the Supreme Court, the judge choked up as he spoke about his wife’s support sustaining him to that day. The road to his more likely confirmation to become the nation’s top prosecutor hid an emotional coda on Monday, as Garland reflected upon how the day was made possible by his grandparents fleeing antisemitic persecution in Eastern Europe.

“I come from a family where my grandparents fled antisemitism and persecution,” Garland said, holding back tears. “The country took us in and protected us. And I feel an obligation to the country to pay back. This is the highest, best use of my set of skills to pay back. And I want very much to be the kind of attorney general that you’re saying I could become. And I’ll do my best to be that kind of attorney general.”

Emotional moment in Day One of Judge Garland's confirmation hearing as he tears up while discussing his family fleeing antisemitic persecution in Eastern Europe.

"I feel an obligation to the country to pay back with the highest, best use of my own set of skills." pic.twitter.com/yIKb2FvtBE

(Screenshot from the Senate Judiciary Committee)