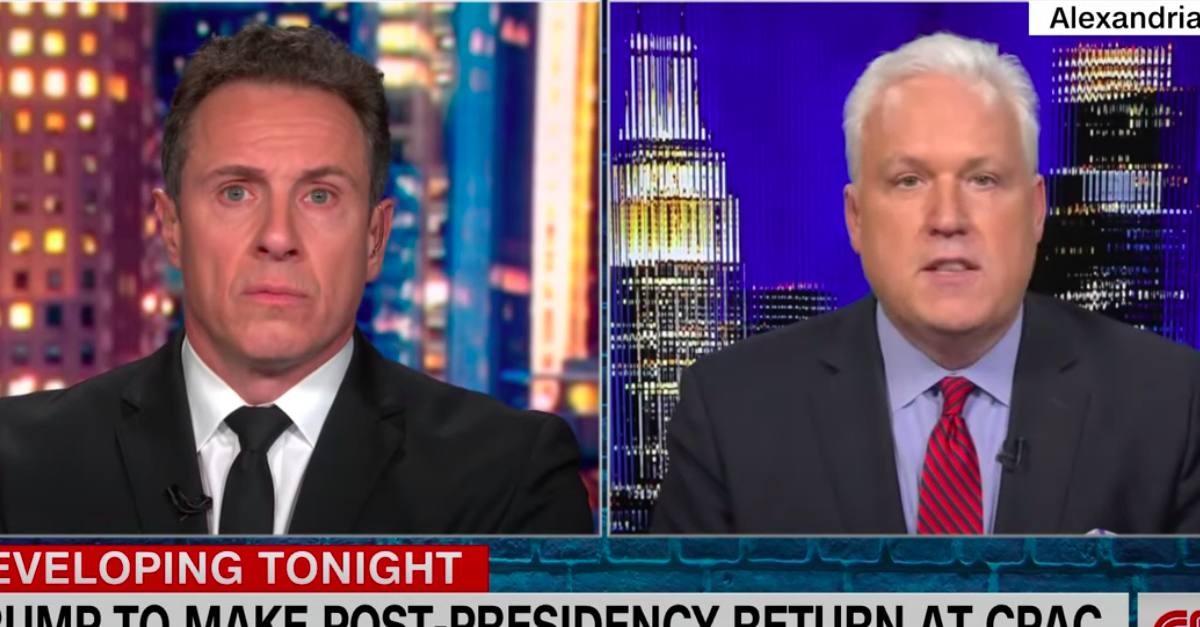 Despite no supporting evidence, a significant number of Republicans have continued to back Donald Trump’s falsehood that the 2020 election was illegitimate.

A staunch supporter of Trump throughout his presidential term, Schlapp continued to defend the baseless claims about widespread voter fraud—since dubbed “the Big Lie”—which hundreds of pro-Trump rally goers believed in strongly enough that they traveled to D.C. at Trump’s request and invaded the U.S. Capitol complex on Jan. 6.

Asked why it was a good idea to give the former president a national platform and whether that meant CPAC was “tacitly endorsing his election farce,” Schlapp said he didn’t know what Cuomo was talking about.

“Well, he lied about the election being a fraud, and you having him there and giving him a platform seems to be your acknowledgment of the same,” said Cuomo.

Schlapp then attempted to claim that several swing states and municipalities flouted legal requirements in administering the election—a claim that was heavily adjudicated and dismissed by multiple courts. All told, Trump and his allies failed some 60 times at every level of the federal court system and in several state courts—never once proving a “steal.”

After Cuomo pushed back, the CPAC chairman reverted back to objectively untrue claims about widespread election-altering fraud.

“You had me on the show and you’re telling me that saying there was widespread illegal voting is false, and I’m trying to explain to you that, for instance, what they did in the state of Georgia when they had an illegal consent decree to not verify the signatures of mail-in ballots—which is what they also did in Clark County [Nevada]—that means you have no security on the ballot that was mailed out without unsolicited vast mail-in ballots. They were returned with no security,” Schlapp said, revealing ignorance about how mail-in ballots are counted.

As previously reported by Law&Crime, attorney and elections expert Michael Li went to great lengths to debunk the notion that mail-in voting would lead to rampant fraud, pointing out that U.S. elections maintain several safeguards to prevent against exactly his kind of tampering. For example, envelopes for all mail-in ballots have unique bar codes that are scanned when the ballots are received, and signatures from mail-in ballots have to match signatures already on file. Those measures make any large-scale counterfeiting endeavor extremely difficult, if not impossible.

Schlapp’s specific claim about Georgia officials being unable to verify signatures has also been conclusively debunked by state and local officials as well as several news outlets. Election officials in the state also conducted several tabulation audits, including a hand recount that found no evidence of fraud.

“You’re making a straw man argument. It’s a boogeyman argument. There is no proof of rampant fraud. Nobody is saying the process is perfect. You lost and now you’re going to keep that going,” Cuomo responded. “You guys really want the conservative movement to be made on the back of a lie about the election?”

Schlapp eventually conceded that Joe Biden won the presidential election, but insisted that did not mean widespread fraud did not occur.

American Conservative Union Chairman Matt Schlapp defends his decision to invite Donald Trump to speak at CPAC this weekend, despite the former President's ongoing lie that he won the 2020 election. https://t.co/vboWYo5DjU pic.twitter.com/wOeCqdyMo5

Schlapp capped off the segment by saying, “Just because you fail in court doesn’t mean you don’t have a good case. It means you lost in court.”