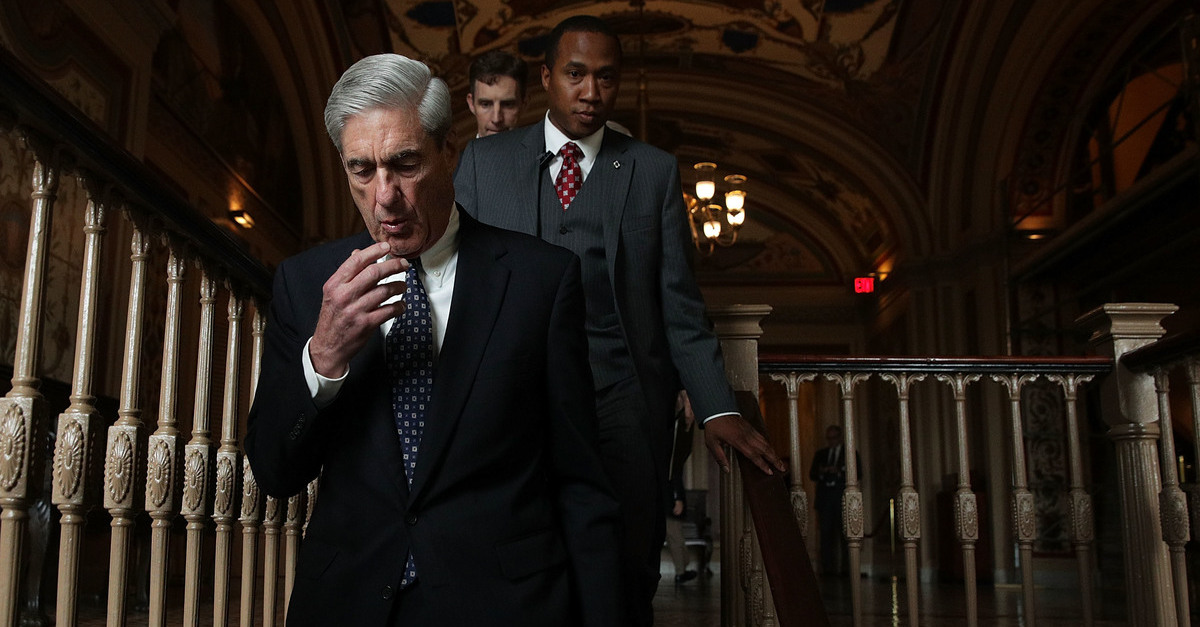 The U.S. Court of Appeals for the District of Columbia will hear oral arguments next week on an effort by House Democrats to obtain the full and unredacted report by former special counsel Robert Mueller–including still secret, closely-guarded grand jury materials.

Those discussions won’t take place in front of the entire D.C. Court of Appeals, but will instead be overseen by a three-judge panel.

The panel system in federal courts typically operate by way of the chief judge’s discretion. Here, however, Chief Judge Merrick Garland had nothing to do with the composition of the panel comprised of Neomi Rao, Thomas Griffith and Judith Rogers.

A court official explained to Law&Crime that court staff randomly draw panels at least six months in advance and assign them to “sitting periods.” Such panels are on duty for the assigned period and stand ready to take up emergency cases such as the present deliberations which will decide the next stage of the lawsuit aimed at forcing the release of Mueller’s entire report.

Here’s what we know about the panel so far.

As Law&Crime previously reported, Rao was criticized for a column in The Yale Herald in which she appeared to blame rape victims.

“A man who rapes a drunk girl should be prosecuted,” she wrote. “At the same time, a good way to avoid a potential date rape is to stay reasonably sober.”

Rao apologized for that column during her confirmation hearings.

Since Rao was confirmed in a 53-46 vote, critics have alleged that she’s acted less like a judge familiar with the law and more like a foot soldier for the Trump administration.

Rao was the lone dissent in a 2-1 decision that determined President Donald Trump’s tax returns must be provided to congressional investigators.

In her dissent she wrote, “allegations of illegal conduct against the President cannot be investigated by Congress except through impeachment,” which simply is not true–as many legal observers noted immediately after the decision.

“Neomi Rao’s dangerously expansive views on presidential power are well-documented,” wrote Alliance for Justice President Nan Aron. “She emphasized that there’s a limited ability to hold the President accountable while in office. By implication, she dismisses the notion that the President can be held accountable criminally.”

Griffith was nominated by George W. Bush twice and eventually confirmed in 2005 after his first nomination lapsed due to Senate inaction. Few fireworks occurred during Griffith’s confirmation hearings and he was ultimately supported by Democrats Harry Reid, Dick Durbin, Barack Obama and Joe Biden, among others.

Before serving as a federal judge, Griffith worked as the Senate Legal Counsel where he represented the Senate in litigation and advised Senate leadership on legal issues. Notably, Griffith served in this regard during the impeachment trial of then-president Bill Clinton.

Griffith’s tenure as a judge has been largely free of controversy.

The decisions in which Griffith has joined and authored don’t express much in the way of right-wing radicalism or a departure from established conservative jurisprudence–though Griffith has been attacked by liberals over his position on Chevron Deference.

In 2007, Griffith affirmed an individual’s right to bear arms under the Second Amendment. Later that same session, he saved a major provision of the McCain-Feingold campaign finance law–only to have his opinion later overturned by the same 5-4 majority of conservative justices who eventually authored the Citizens United ruling.

Griffith strongly broke with his party in 2009 and in 2011 by dissenting from two separate panel decisions which denied the writ of habeas corpus to a collection of Guantanamo Bay detainees who were scheduled to be transferred to countries where they would likely be tortured. Griffith offered strong arguments in favor of prisoners’ rights to challenge what they viewed as unlawful transfers.

Rogers was nominated by Clinton to fill the seat vacated by now-Supreme Court Justice Clarence Thomas in 1994. Rogers sailed through the process without much fanfare or opposition.

Her tenure as a judge has also been largely non-controversial. She, like Griffith, dissented in two separate panel decisions regarding the rights of Guantanamo Bay detainees–arguing for legal and due process rights against the protests of her more conservative colleagues and the second Bush administration’s legal team.

A former government lawyer, Rogers’s legal career included stints as a trial lawyer for the Department of Justice and general counsel for the congressional commission which granted home rule to the District of Columbia–where she later served as the first female corporation counsel (the former name for the office of Attorney General).

In 1998, Rogers joined a panel decision that determined attorney-client privilege between government lawyers and officials was nonexistent in the context of criminal investigations.

“Government attorneys stand in a far different position from members of the private bar,” the panel said in a case related to Clinton’s impeachment over the Monica Lewinsky scandal. “Their duty is not to defend clients against criminal charges and it is not to protect wrongdoers from public exposure.”

Editor’s note: this article has been amended post-publication for accuracy in order to fully explain how the panel-selection system works in the D.C. Court of Appeals.