‘Their Strategy Is for These People to Die’: Tulsa Race Massacre Survivors’ Lawyer Accuses City of Brutal Bid to Run Out the Clock 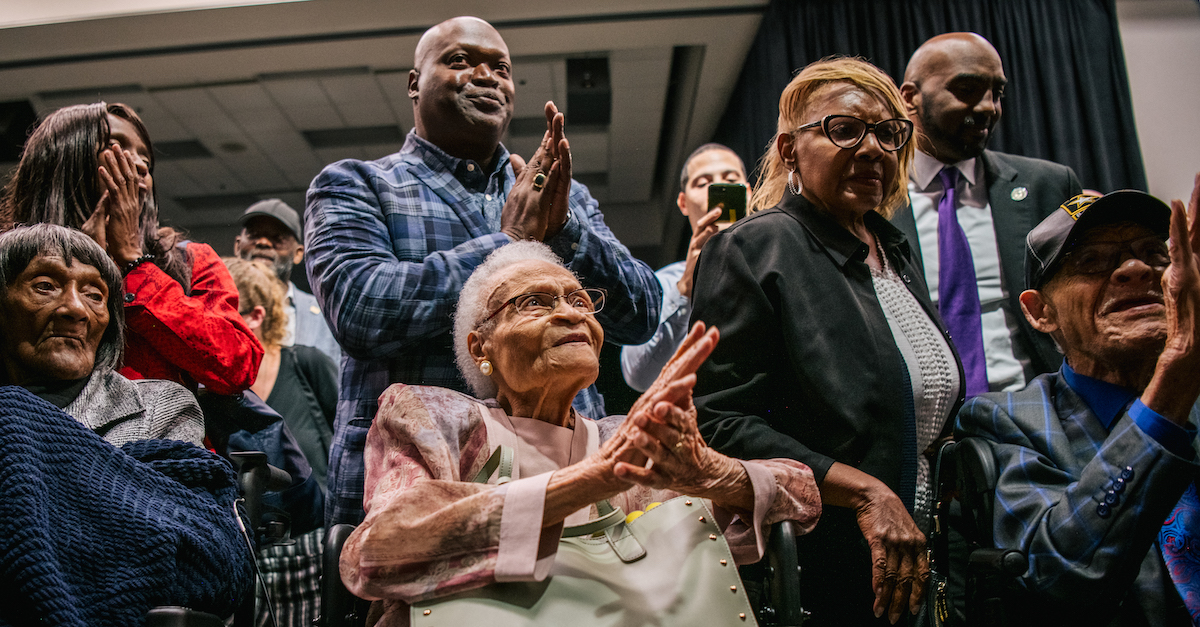 Survivors Lessie Benningfield Randle, Viola Fletcher, and Hughes Van Ellis sing together at the conclusion of a rally during commemorations of the 100th anniversary of the Tulsa Race Massacre on June 1, 2021 in Tulsa, Oklahoma. (Photo by Brandon Bell/Getty Images)

More than a century after one of the worst racial terror attacks in U.S. history decimated “Black Wall Street,” the survivors may be running out of time, and their lawyer believes that the city of Tulsa may be banking on that.

As their lawsuit enters their third year, two of the survivors — Lessie Benningfield Randle and Viola Fletcher — are 108 years old. The youngest, Hughes Van Ellis (also known as, “Uncle Red”), is 102 years old.

Opening up about their quest for reparations, their lawyer Damario Solomon-Simmons told Law&Crime that the city of Tulsa has played a brutal waiting game in an effort to run out the clock.

“Don’t make any mistake about it: Their strategy is for these people to die,” Solomon-Simmons declared in a soon-to-be-released episode of Law&Crime’s podcast Objections: with Adam Klasfeld.

That spirit of openness changed, the lawyer said, once his clients decided to sue.

The city of Idaho did not immediately respond to an email requesting comment.

Since those survivors sued in September 2020, Tulsa and various municipal entities have strongly opposed the litigation. The survivors defeated one motion to dismiss last year, only to face another one pending in 2023.

“When we filed our lawsuit, all of these quotes that we had about them saying, ‘This is wrong, and we want to do right,’ all that ended,” Solomon-Simmons noted.

The city of Tulsa, Solomon-Simmons says, wanted to appear to be turning the page before the commemoration of the massacre’s centennial on June 1, 2021, which brought national attention to the city and its history. President Joe Biden visited the city of Tulsa to mark the 100-year anniversary of the massacre, where he addressed the three survivors.

“Thank you for spending so much time with me,” Biden told them at the commemoration, referring to two of them by their affectionate nicknames Mother Randle and Mother Fletcher. “I really mean it. It was a great honor. A genuine honor.”

The ravaging of their neighborhood was as sudden and violent as the cover-up of the massacre proved long and protracted. For 18 hours over a course of two days in 1921, an armed mob looted and set fire to a then-prosperous “Black Wall Street,” killing 300 people and causing millions of dollars in damage.

As Solomon-Simmons recounts, the subsequent “conspiracy of silence” lasted roughly 80 years in the city of Tulsa. This cover-up was so effective that Solomon-Simmons said that he didn’t know about it as a college student — and he grew up in Greenwood.

Sharing an anecdote from his time as a University of Oklahoma student, Solomon-Simmons recalled doubting his African American studies professor’s account of the massacre.

After that remark, Solomon-Simmons said, his professor “just went off.”

“I had such a sense of shame and embarrassment,” he recalled, adding that he also had a newfound sense of mission and purpose.

“It was that day that made my mind I would do everything in my power to learn so much about Greenwood and the massacre, educate others and then advocate for justice,” he said. “I made a decision that day. That was 1997, and since that day, that’s what I’ve been doing.”

Though the Tulsa race massacre exploded into national consciousness in recent years, the political movement that led to this reckoning had been decades in the making.

In 1990s, the Democratic Party had control over Oklahoma’s statehouse when lawmakers pushed forward what had then been called the Tulsa Race Riot Commission.

Empaneling historians and academics and scholars from across the nation, the commission laid out the oral histories in what Solomon-Simmons described as a “very powerful document” of about 450 pages. That report, released in 2001, commanded nationwide media attention, and Solomon-Simmons credits famed attorney Johnnie Cochran and Harvard Law School Professor Charles Ogletree with further advancing the effort with what was called the Reparations Coordinating Committee.

Referring to Ogletree as his “mentor,” Solomon-Simmons described his role in an effort to convince U.S. lawmakers to remove the statute of limitations hurdle to the survivors’ litigation. That put the then-younger lawyer in contact with then-Senator Barack Obama (D-Ill.). Another man who would later spend time in the White House, then-Rep. Mike Pence (R-Ind.), would vote against extending the statute of limitations, Solomon-Simmons recalled.

Though the runaway successes of the HBO dramas Watchmen and Lovecraft County gave the massacre pop-cultural recognition, Solomon-Simmons noted: “The black people in Tulsa, who suffered the massacre, they started fighting from day one.”

That fight continues, as the Tulsa massacre survivors await the outcome of a pending motion to dismiss. Should the case ultimately go to trial, Solomon-Simmons predicts a wealth of historical information will be unearthed.

As for his clients, they are hopeful for their longevity. Solomon-Simmons quoted Randle and Fletcher telling him: “We will hold out as long as we can.”

“I’m not going anywhere,” Van Ellis, at age 102, reportedly said. “If I have to live to 130, to get the justice that I deserve, my family deserves, and my communities deserve, what I’m going to do.”