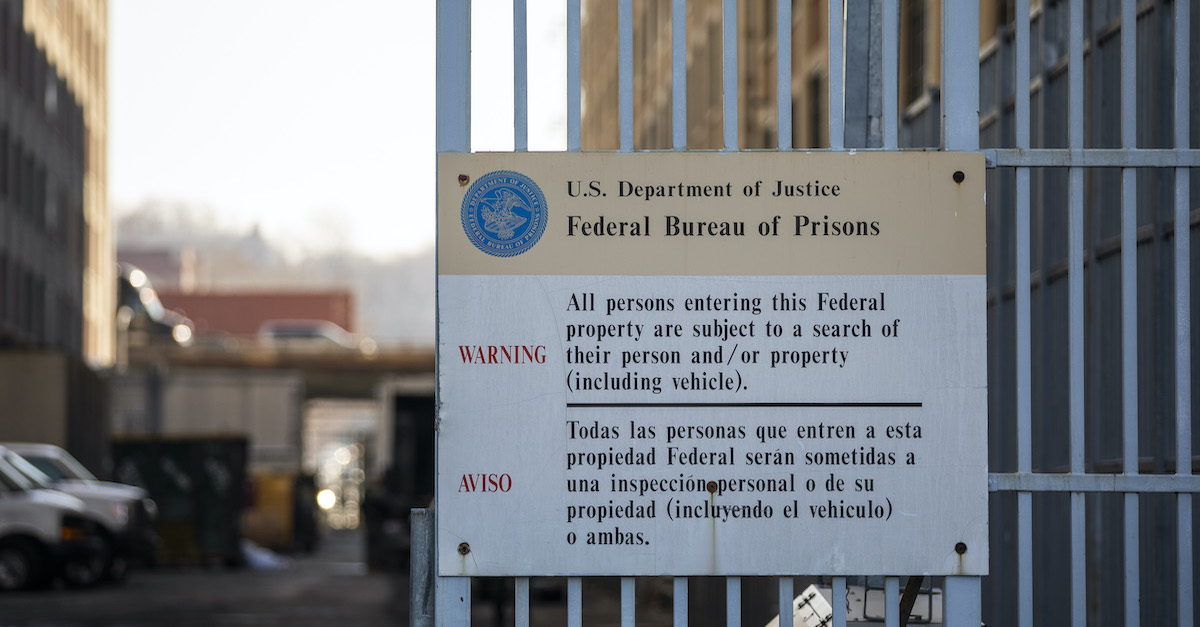 A sign is posted outside the Metropolitan Detention Center on Feb. 4, 2019 in the Brooklyn borough of New York City. (Photo by Drew Angerer/Getty Images)

The Department of Justice undercounted at least 990 prison and arrest-related deaths in the 2021 fiscal year alone, a Senate subcommittee found in a report released on Tuesday.

Titled “Uncounted Deaths in America’s Prisons & Jails: How the Department of Justice Failed to Implement the Death in Custody Reporting Act,” the 25-page report by the U.S. Senate Permanent Subcommittee on Investigation — chaired by Sen. Jon Ossoff (D-Ga.) — represents the conclusion of a 10-month investigation.

“The Subcommittee has found that DOJ will be at least eight years past-due in providing Congress with the DCRA 2013-required 2016 report on how custodial deaths can be reduced,” its executive summary states. “The Subcommittee also highlights the following key facts: in Fiscal Year (‘FY’) 2021 alone, DOJ failed to identify at least 990 prison and arrest related deaths; and 70% of the data DOJ collected was incomplete.”

“DOJ failed to implement effective data collection methodology, despite internal warnings from the DOJ Office of the Inspector General (‘OIG’) and the Bureau of Justice Statistics (BJS),” it continues. “DOJ’s failures were preventable.”

The committee’s top GOP member is Sen. Ron Johnson (R-Wisc.), whose name is on the report. The investigation was described as bipartisan.

For the Justice Department, some of the deaths were hiding in plain sight, according to the committee.

“At least 341 missing and potentially reportable prison deaths were disclosed on states’ public websites but were not collected by BJA,” the report states, referring to the Bureau of Justice Statistics. “At least 649 missing arrest deaths were reported in a public database maintained by a non-profit civil rights organization, but were not collected by BJA.”

For the committee, these findings signal a failure to implement the Death in Custody Reporting Act (DCRA), which passed in 2000 and was reauthorized by Congress in 2013.

“The co-sponsors of DCRA, which passed the United States Senate by unanimous consent and the United States House of Representatives by wide bipartisan margins in both 2000 and again in 2013, described why collecting death data was critical: it would bring a ‘new level of accountability to our Nation’s correctional institutions’; ‘provide openness in government’; ‘bolster public confidence and trust in our judicial system’; and ‘bring additional transparency,'” the report notes.

According to the report, the DOJ satisfied its obligations under the law for nearly two decades: from 2000 and 2019.

“From 2000 through 2019, BJS collected, studied, and made public information about deaths in custody, information that went far beyond the statutory requirements,” the report states. “During this period, BJS claims to have collected data from an average of 98% of all local jails and 100% of all state prisons.”

But the committee says that the failures since 2019 has deprived Congress and the public of critical information.

“DOJ’s failure to implement DCRA has deprived Congress and the American public of information about who is dying in custody and why,” the report states. “This information is critical to improve transparency in prisons and jails, identifying trends in custodial deaths that may warrant corrective action—such as failure to provide adequate medical care, mental health services, or safeguard prisoners from violence—and identifying specific facilities with outlying death rates. DOJ’s failure to implement this law and to continue to voluntarily publish this information is a missed opportunity to prevent avoidable deaths.”

The Justice Department blamed the faulty collection practices on changes to the law during the reauthorization.

“The enactment of DCRA of 2013 had several unintended consequences that have degraded and hindered the Department’s ability to produce complete and accurate information,” the DOJ wrote in a 17-page report. “Prior to DCRA of 2013, BJS achieved near 100% response rates and was producing accurate and complete statistical information regarding deaths in local jails and state prisons.”

Since that time, the DOJ says it’s been unable to collect directly from local agencies.

“DCRA of 2013 requires the Department to rely on the reports from the 56 state and territory JAG grant recipients that collect data using varied strategies and collectively have proven to be ineffective in producing complete and accurate information,” the DOJ’s report states.

Sen. Ossoff will convene a hearing today at 2:30 p.m. Eastern Time to announce the findings of the report.