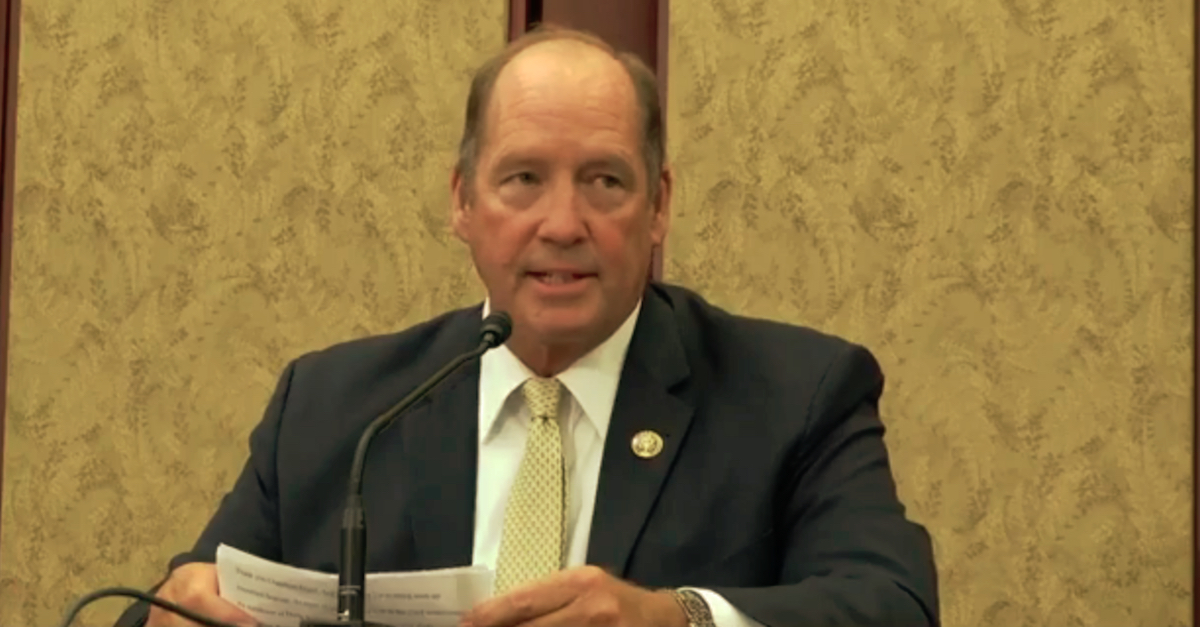 It sure sounds like a Florida legislator needs a lesson in manners. According to a report by The Hill, a heated exchange between Florida Congressman Ted Yoho (R-Fla.) and Rep. Alexandria Ocasio-Cortez (D-N.Y.) occurred Monday on the steps of the Capitol just after a vote.  And by “exchange,” we mean that Yoho insulted Ocasio-Cortez by calling her “disgusting” and telling her she was “out of [her] freaking mind.” AOC responded by calling Yoho “rude,” and as he walked away, Yoho was heard openly saying “fucking bitch” as the two parted ways.

Yoho told AOC she was “disgusting” for suggesting that poverty and unemployment are driving a spike in crime in NYC during coronavirus.

“You are out of your freaking mind,” Yoho told her.

AOC told Yoho he was being “rude.”

Asked about the incident, Ocasio-Cortez told press, “That kind of confrontation hasn’t ever happened to me — ever.” She continued, “I’ve never had that kind of abrupt, disgusting kind of disrespect levied at me.”

Twittereprimands have been rolling in since reports of the incident broke.

This exchange is both sexist and racist. Full stop.

Because this is buried in the article: Rep. Ted Yoho called Rep. Ocasio-Cortez a “fucking bitch.”

Ted Yoho has a lot of explaining and apologizing to do. Calling another member of the House of Representatives a “fucking bitch” is wrong and sexist. It also casts disrepute on the House, which is the grounds for an ethics investigation. https://t.co/L3HRhFho2d

Another angry white, affluent, man of priveledge can’t verbalize a thought without calling a woman a bitch. Welcome to Tuesday in trump world.

Hey, @RepTedYoho, I heard you decided to call my rep @aoc a “fucking bitch” for advocating for her community. That sort of behavior may play well in Florida, but it’s unbecoming of a member of Congress.

According to The Hill’s report, Congressman Roger Williams (R-Texas) had been walking down the stairs as Yoho hurled insults at AOC.

Ocasio-Cortez also tweeted that Williams was not only a witness, but that he participated in the exchange as well:

Gotta love Republican courage from Rep @RogerWilliamsTX: when he undeniably sees another man engaged in virulent harassment of a young woman, just pretend you never saw it in the most cartoonish manner possible and keep pushing.

In comments to The Hill, Williams claims to have been deep in thought. “I was actually thinking, as I was walking down the stairs, I was thinking about some issues I’ve got in my district that need to get done,” Williams said. “I don’t know what their topic was. There’s always a topic, isn’t there?

What’s wild to me @RogerWilliamsTX is why would you blatantly lie to a reporter who saw this exchange?

You were yelling at me too, about “throwing urine.”

There certainly was a topic. Ocasio-Cortez had been defending comments she made earlier this month about crime spikes during the coronavirus pandemic. During a July 9 event, AOC said, “Crime is a problem of a diseased society, which neglects its marginalized people,” adding, “Policing is not the solution to crime.”

She continued to state that “economic desperation” during the pandemic was to blame for the increase in crime.  Facing criticism from conservatives that AOC was making excuses for those committing violent crimes, she clarified Monday:

Calling out conservative media for taking her previous comments out of context, she said:

So the right wing cuts up this clip, per usual, in a very misleading way. . . . They basically [want] to make it seem as though I’m saying people are shooting each other because they’re hungry.

Some male Democratic members of Congress, including Rep. Ruben Gallego (D-Ariz.)  and Rep. Dean Phillips (D-Minn.) pointed out via Twitter that they’ve made the same points about poverty and crime, and that no one ever used profane language when disagreeing with them.

Like @aoc, I believe poverty to be a root cause of crime. Wonder why Rep. Yoho hasn’t accosted me on the Capitol steps with the same sentiment? #shameful https://t.co/f5qkC3CbTR

I have suggested the same thing that @aoc has poverty & unemployment lead to crime. Weird neither Yoho or any other member has ever talked to me that way. https://t.co/eQfwBe0223

While many would agree that Congresspeople cursing each other out on the Capitol steps is a bad look, is there actually anything illegal about it?

The lengthy Rules of the House of Representatives is revised for each Congress. In it, there is a section marked “The Code of Official Conduct.” In that section, the very first rule reads as follows:

A Member, Delegate, Resident Commissioner, officer, or employee of the House shall behave at all times in a manner that shall reflect creditably on the House.

“Creditably” means “in a satisfactory way” or “bringing or deserving credit, honor, reputation, or esteem.”

Would calling a fellow member of Congress “disgusting” or a “fucking bitch” meet those definitions? We’re guessing the answer is a hard “no.” However, Yoho certainly wouldn’t be the first member of Congress to make rude remarks to a coworker outside the chamber, so we don’t expect there to be much recourse on this basis.

Of course, had Yoho uttered his words during a House proceeding, Rule XVII, clause 4 of the standing rules of the House of Representatives would have given Ocasio-Cortez a parliamentary mechanism to call him out.

Yoho’s language would likely have been deemed “disorderly” or “unparliamentary,” and therefore a violation of House rules of decorum. Had they been on the debate floor, AOC could have demanded that Yoho’s “words be taken down.” However, given that the exchange happened outside on the Capitol steps, it appears that Yoho’s comments would not constitute a direct violation.

Tuesday, Ocasio-Cortez tweeted several times about the exchange in which Yoho “accosted” her on the steps of the Capitol.

I never spoke to Rep. Yoho before he decided to accost me on the steps of the nation’s Capitol yesterday.

Believe it or not, I usually get along fine w/ my GOP colleagues. We know how to check our legislative sparring at the committee door.

Congressman Yoho does not appear to have tweeted about the reported exchange with Ocasio-Cortez and has reportedly declined comment. Law&Crime attempted to contact Yoho for comment, but his office’s outgoing voicemail stated that the office was currently closed, and his website does not list email addresses.