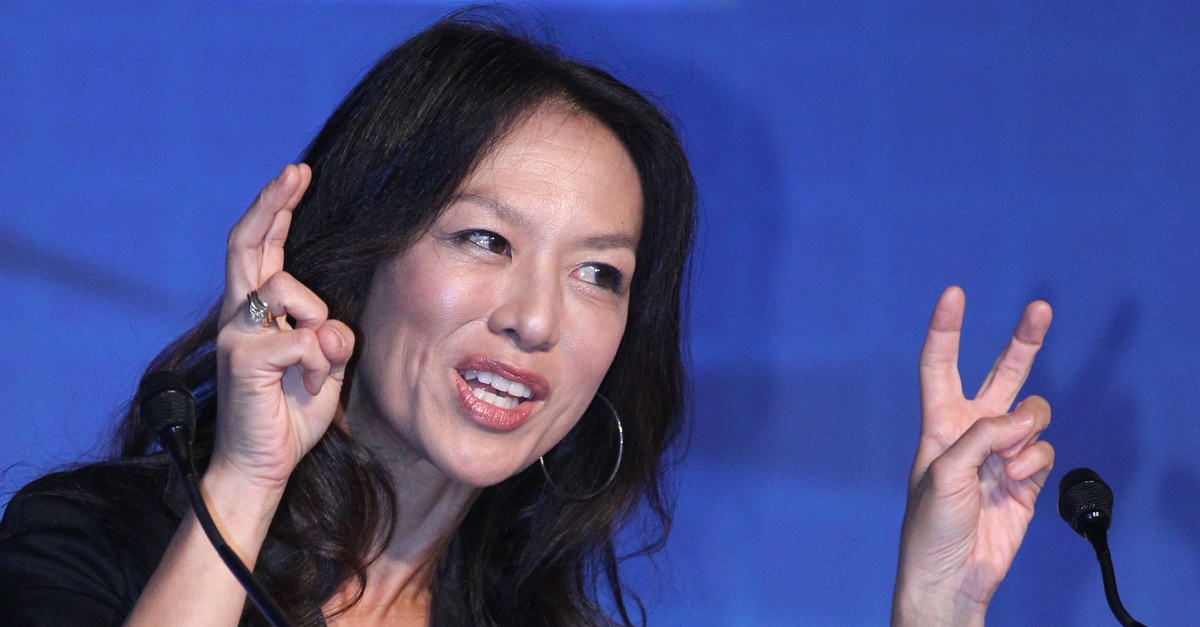 Yale Law professor Amy Chua speaks at the World Knowledge Forum in Seoul on October 13, 2011. Chua, as known as “Tiger Mom” after she sparked international controversy this year with her book “Battle Hymn of the Tiger Mother,” urged strict Asian parents to relax and give their children more freedom but also to avoid the “romanticized” Western focus on creativity over hard work.

Battle lines are being drawn in the world of legal academia. On one side is a group of anonymous students who say they are afraid of a celebrated and powerful attorney whose daughter clerks for Supreme Court Justice Brett Kavanaugh. On the other side is that attorney, Yale Law Professor Amy Chua, who is now fending off myriad allegations of impropriety and retaliation.

“I am writing anonymously as one of the people who presented evidence of Chua’s misconduct to the Law School,” a student wrote in an open letter widely circulated Saturday on Twitter in response to a series of letters and tweets Chua has posted to defend herself.

The anonymous letter-writer goes on to reference a previous defensive letter penned by Prof. Chua:

Chua’s letter reads as an attempt to retaliate against and falsely malign students who bravely came forward out of concern for the safety of their peers . . . The clear effect of Chua’s letter has been to intimidate accusers, including those who leaked the confidential dinners, with the threat of ‘serious punishment.’ Since Chua found out she was losing her small group, I have heard from many students that they are genuinely fearful of retaliation from Chua and believe that she would seek to destroy their careers if they spoke out.

The controversy went public late Wednesday when the Yale Daily News reported that Chua had been suspended from first-year law student teaching duties after students complained she threw parties at her house “despite having agreed in 2019 to cease all out-of-class hours interactions with students.”

That agreement came about after the school suspended Chua’s husband, Jed Rubenfeld, after an internal investigation determined he engaged in “a pattern of sexual harassment of several students.”

Rubenfeld is currently serving a two-year suspension from the Law School following a University Wide Committee on Sexual Misconduct investigation into allegations of verbal harassment, unwanted touching and attempted kissing in the classroom and at his home. Students have since called for Rubenfeld’s permanent removal and demanded greater transparency about the findings of the sexual misconduct investigation into him, but University President Peter Salovey has not released any specifics about Rubenfeld’s case.

“Rubenfeld did tell the News that ‘completely false’ information has been circulating about his case, disputing media reports that say he faced accusations of unwanted sexual touching,” a previous report explains. “The University has not disclosed the specific allegations he faced.”

Late Saturday morning, Chua suggested that she was being targeted due to her race and gender. In an email to Law&Crime, Chua clarified that she was “referring to the Yale Law School Administration.”

Earlier, on Thursday, Chua sent a faculty-wide letter defending herself against the Daily News report and her suspension without explicitly denying the heart of the claims against her — and by saying she “didn’t want to teach” first year law students in 2021 anyway.

Instead, the law professor said she hosted a handful of consolation-themed gatherings to address national crises concerning racism and anti-Asian violence that have impacted Yale Law students.

“As I wrack my brain to try to imagine what ‘dinner parties’ with students they could possibly be referring to, I can only think of a few possibilities—all of which I not only stand by, but am proud of,” Chua wrote. “In the midst of these [national] events, a few students in extreme distress reached out to me, feeling that they had no one else to turn to, many of them feeling that the law school administration was not supporting them. Because we could not meet in the law school building, we met at my house, and I did my best to support them and console them.”

The anonymous student whose letter has since circulated online took issue with the professor’s account.

“Chua mischaracterized and lied about the dinners she hosted,” the letter alleges. “As [the Daily News] reports, Chua agreed with Dean Gerken in 2019 to stop hosting students at her house and to stop drinking with them. Recently, students came forward to [the Daily News] and the law school administration to present documented evidence, which was reviewed by [the Daily News‘s lawyers] showing that she had violated this agreement.”

In her faculty letter, Chua said “I do not believe that I have violated anything in the agreement” reached with Yale Law School’s dean. She further goes on to say she believes the school’s newspaper “mischaracterized” the terms of that “confidential” document.

The anonymous student’s response goes on to suggest that Chua could have met with students at multiple locations within the law school or anywhere else “besides the home she shares with a man who has been banned from interacting with students because of decades of alleged sexual misconduct.”

In her earlier letter, Chua says that “we could not meet in the law school building” and that “Jed was not present.”

In response to an inquiry from Law&Crime, Yale Law provided a link to a statement from Dean Heather Gerken.

“First, Yale Law School cannot comment on, or even acknowledge the existence of, faculty disciplinary cases, and it strictly maintains the confidentiality of faculty employment files,” Gerken said. “Second, the Law School and the University thoroughly investigate complaints regarding violations of University rules and the University adjudicates them whenever it is appropriate to do so.”

The statement goes on:

Finally, as I have said before, faculty misconduct has no place at Yale Law School. It violates our core commitments and undermines all the good that comes from an environment where faculty respect and support students. The Law School has a set of clearly articulated norms governing student-faculty interactions and is committed to enforcing them. These norms are in place to ensure we provide a safe environment in which all of our students can live and learn in a community of mutual respect. As Dean, I take this responsibility extraordinarily seriously. I encourage any members of our community who have been affected by misconduct to contact me or Associate Dean Ellen Cosgrove.

Law&Crime also asked Professor Chua a series of detailed questions about the allegations made in the open letter, but no response was forthcoming at the time of publication.

The anonymous students who came forward have been attacked by some of their peers in testimonials favorable to Chua; meanwhile, on Twitter, they have seen a wellspring of support from some members of the legal community at other law schools.

“I was asked to share this message by one of the students who came forward to Yale Law School about Prof. Amy Chua’s recent interactions with students,” University of Michigan Law Professor Leah Litman tweeted on Saturday afternoon. “I encourage everyone to read this message, and encourage the legal profession/legal academia to get their shit together.”

“To the student: I’m so sorry this is happening to you and other students,” University of North Carolina Law Professor Alexa Chew said via Twitter. “It’s not ok.”

Chua became famous in 2011 for a memoir in which she derides parenting styles that focus on uplifting children’s self-esteem. Her conduct became the subject of controversy in 2018 for allegedly grooming female law clerks for Kavanaugh — a charge she has denied.

Law&Crime could not independently speak to the students who accused Chua of misconduct because their identities are unknown.